The headlines just keep coming on the Dow Jones Industrial Average hitting a new high. “bull market or bear trap?” Of course over time we will know the answer to that question, but the speculation against the uptrend continuing short term is amazing. Believe  me I get the skepticism, but the level of belief the rally is over has reached a level of noise it is distracting. That alone is why we need to keep our stops in place and manage the risk of our portfolio.

Today the market attempted to follow through on the upside but gave up the effort into the last hour of trading. The S&P close up one point, the NASDAQ down two points, and the Dow gained forty-two points. Nothing to dance over, but it did hold the move above the February highs.

Maybe now the focus will shift to the positive data from the economy versus the negative? If the trend continues the market will get the catalyst it has needed to continue the upside move.

Economy is steadily treading water with little to no growth as the GDP report bears witness to. The short term outlook for the economy is positive, but just barely. Keep your focus and remain disciplined relative to your stops and exit points. The data has shown some positive signs over the last week and the key will be for markets to buy-in that things are improving with the economy.

The February 25th low pivot point remains in play this week. The chart below shows the leadership from XLY accelerating to lead the move. XLB playing catch-up after some selling the last two weeks. , XLF regaining some leadership poise. XLU still accelerating higher XLK played into the leadership move on Tuesday. Looking for the upside to regain momentum if the uptrend is to hold short term. (FLAT on Wednesday, but still watching the upside. Financials and Basic Materials remain in an upswing.) 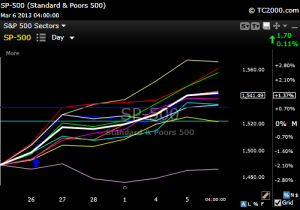 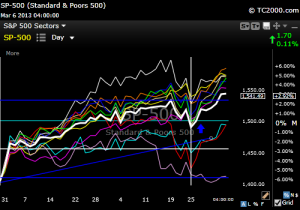 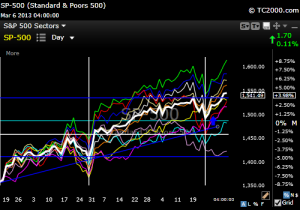 Technology – The trading range remains in play and holding support. XLK broke above the $30 level and held on Wednesday. The entry point was hit on XLK and IGV. FDN and SOXX are both in position to move higher as well.

Financials – Struggled of late to hold support and maintain the current uptrend, but it has now made it to the previous high with banks ready to break higher. KBE, KRE, IAI, KIE all are ready to eclipse the February highs short term.

Energy – The sector remains under pressure from the decline in crude oil prices. The stronger dollar along with increases supply and storage has been the biggest detractor to the sector overall. XLE tested lower and we are looking for upside opportunity to return if the prices settle. Sitting on $7820 resistance for now.

Basic Materials – Moved back to resistance at $39.15. As seen on the rotation chart above the gains to the upside have accelerated above the others and the sector is the leader of the Feb. 25th low. Watch for the sector to clear resistance and offer some upside opportunity.

Euro – The euro (FXE) Broke support at $129.50 and ready to move lower? This is not improving short term as the outlook for Europe remains questionable. Still looking for some support. $128.80 holding as support for now.

Treasury Bonds – Bounce higher in rates short term. Not something I would expect to remain in place unless the fear factor is completely removed and the VIX is pointing to that short term.

Corporate Bonds – LQD = 3.8% yield. The price has found short term support ($118.90). The move above $120 has reversed on the move higher in rates. Watch to see if the bond ETF tests support again.

Municipal Bonds – MUB = 2.8% tax-free yield. The price of the bonds continue to move sideways. Found support and bounced back, but still looking for direction. Some downside on Wednesday break support on the move at $111.40.

Commodities remain weak, but there is some hope on the upside for some. Watch those components with a trade opportunity short term. 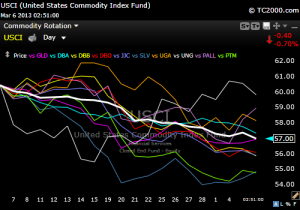 BAL – A trading range of $52.80-54.40 is in play. A break higher would be a continuation of the move off the November lows. Stalled and trading sideways. Watch and see it this can break higher. Tested lower again on Monday and back near the high on Wednesday? Thursday closed at the break out point watch for trade going forward. Confirmation to the break from consolidation last week. Keeps moving higher for now.

UGA – Testing support at $60.50 Short play? Look for support and a bounce more than the short side.

WATCH: Testing support at $60.50. Holds look for trade at $61 (volume has dried up use limit orders only/AON) Got the trade opportunity on Tuesday on the upside. Test on Wednesday with the selling. Willing to wait for a clear bottom and opportunity on the upside or downside.

EFA – Watch $56.90 support to hold on the recent test. The long term uptrend remains in play and support has held to this point. Patience for the trade to develop. Moved back to resistance at the $59.10 level today. Watch and trade accordingly.