Positive news in biotech (XBI) sends the sector up 6% on the day as the data shows that the pontificating relative to the sector valuation may be wrong. Biogen and Intuitive Surgical beat expectations on earning sending both stocks up more than 12%. Facebook will announce after-hours and address the other concern… the social media stocks. These two leaders (biotech and social media) have faded nearly 8% on valuation comments from not the least of which, Ms. Yellen. The push helped the broad indexes again post a positive day, but they are also challenging the previous highs. The S&P 500 index and the NASDAQ 100 index have both move above the July 3rd high. The bigger question for me is how they progress moving forward.

More data from the oil sector relative to inventories today. For 7 of the last 8 weeks the inventories have declined more than expected. This shows demand is on the rise slightly, but enough to have refineries producing at 93.8% of capacity. The production is the highest level since the recovery started in 2009. Thus, the energy sector remains a positive looking forward and produced a modest gain today. Watching to see how they unfold as well.

The global country ETFs have been coming to life again and show solid upside this week. This has been developing for several months and now with the break to new highs in several of the ETFs investors are starting to take note of the money rotation into the global markets. The developed countries are lagging behind the emerging markets in this move. They are worth tracking and managing the moves short term.

Positive day for all and we will see how it all unfolds tomorrow.

The chart below is of SPDR S&P Biotech ETF. It clearly shows the roller coaster ride the sector has been on relative to the many comments made about the sectors valuation being too high or even referred to as a bubble sector. The 30% decline from the February highs to the April/May lows rattle many investors, but the rise of 30% off the lows was equally impressive for investors. The test of support near the $134 level met with some positive buying and then the solid follow through today. Cleared the $148 mark and has the $158 previous high clearly in site. Earnings were the driver today and we now look to see if it follows through. 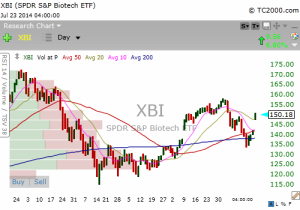