The markets are stalling again near the previous highs as the S&P 500 index approaches the 2114 closing high it seems reticent to make the move. It touched this level on Wednesday and again today. In fact, the index started the day near the 2100 level and fought to get back to 2110 throughout the day. Once again there are more opinions on the issues facing investors than there are commercials during you favorite sitcom. To me investing is about the trend first and foremost, and the trend is driven by facts and impacted by news and events. Thus, we have to be able to filter the facts from the hype. And we all know the hype sometimes sounds very factual, but is not. It fails the sniff test or validation. With that in mind tomorrow ends the week and we have to attempt to put this all in perspective.

My favorite headline of the day goes to MarketWatch on Netflix. Why? It is actually one of those tongue-in-cheek moments that has more truth to a higher meaning than the one they wrote it for.  Stating that analyst are “giddy” about the expansion and signup numbers in their earnings release on Wednesday is an understatement when you look at the revisions on estimates and target prices going forward. If you own Netflix you should thank the investment gods and protect your gains. Stops work well for now as you come up with other strategies that may work better longer term. Don’t get greedy or “giddy” remain discipline.

Crude oil was another bag of “giddy”, but I much more prefer “speculation” than Netflix. As you can see from the chart below the price of oil started the day lower, but thanks to all the love shown to the commodity of late found enough buyers to step in and push it higher on the day. In turn this rallied the energy stocks from their negative territory start to close in the green as well. I am not up to the argument for or against the price of crude moving higher. I will stick to what I stated earlier this week. The break from the consolidation pattern is a buy signal technically. For that reason owning the commodity and the stocks is valid. We will trail it with a stop and let it take the course directed by the voting populous – buyers and sellers. For now that is higher.

Financials started the earning season this week and the results have been mixed and depending on the side of your beliefs you have a resulting interpretation looking forward that matches your beliefs. The numbers have been better than expected overall, but the reception from investors is still lukewarm at best. Stocks like JP Morgan and Goldman Sachs have received some credit with moves higher, but overall cool reception. Looking at KBE and KRE for the sector response by the banks they are both making moves now above their March highs and looking for a follow through on the break from the consolidation technically. Another sector drifting higher, but nonetheless have broken key resistance levels for now and worth a trade if not a longer term view.

The Volatility Index as seen in the chart below is testing the bottom or the volatility has been sucked out of the market on buyers taking control. They have not done that on volume necessarily, but they have accomplished it by getting the majority to believe things are going to be better again now that winter is thawing and warmth of spring is growing optimism for the economy again. All sounds good, but the proof is in the pudding. Take what the market gives, but know where the exits are so when the music stops and someone yells “FIRE” we know where to run. 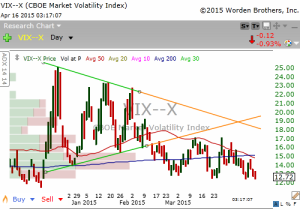 I am firmly of the opinion we spend too much time attempting to predict or ‘know’ what the market is going to do and who the winners are going be. Where is reality what we need is a simple understanding of what we believe to be true looking forward (not backwards) and a simple strategy to capture the trades based on those beliefs. Then we take a disciplined approach to managing the money and the risk associated with the investments. If we are wrong we know where the exits are and what the maximum damage is. If we are right we let it run for as long as the risk makes sense and our money grows. When the horse dies we dismount. Plenty happening in the headlines and in the indexes… take what the markets give and manage your risk moving forward.