Very interesting day for the broad market indexes. The intraday move higher, then lower, then closing higher on the day kept your attention. I would like to say it was a volatile day of trading, but that would not really describe the movement.

The Dow gained 138 points or 0.9% on the day with most of that taking place in the last hour of trading. Intel was the leader up 4% and Merck was up 3.7%. Only two stocks closed negative on the day… JPM and BAC – both financial stocks (XLF) which struggled back to even on the day. The S&P 500 index up 0.5% and NASDAQ up 0.3% posted gains after spending most of the day in the red.

ISM manufacturing was the angst for the markets at the open as it fell to 49% from 50.7% in April. The number below 50% shows contraction in the manufacturing sector. Expectations were for a 51% mark to be posted. This is not good any way you shape it. This matched the negative reports from China and Europe.

Then why the buying in the afternoon? The comments from Lockhart that the Fed would stay engaged in QE infinity based on the economic data. That was interpreted as a zero percent chance of the Fed withdrawing any stimulus currently. Rally on??? Okay, when it becomes this irrational we have to protect our assets.

We will have to be patient here and see how this plays out tomorrow.

We talk about downside risk management all of the time. Choppy markets create many headaches for investors and today is just another example. Manage your risk, exit positions that are not working, and look for what is working moving forward, but most of all be patient.

ISM Manufacturing drops below 50% and shows contraction similar to what we experienced in November… When the current rally started. This is an event filled week for the economic data… so be aware of the volatility it may inject.

Major market indexes bounce back modestly on the day despite the manufacturing data. The April 18th chart below is the last low in the test off the April 11th high. You can see the selling impact at the end of the chart and who the biggest losers were. Added line on the high for May 21st to track as the current high or pivot point if the downside continues as it has five of the last six trading days. To follow up on that thought on Friday, the move lower did open the door for a follow through on the downside. The second chart below shows the May 21st pivot point chart and the leadership on the downside. It gives some clarity to what you are seeing on the April 18th chart. Utilities, Telecom, Consumer Staples, Energy and Consumer Services are leading the downside move. Healthcare jumped into the picture on Friday. Not pretty for the buyers. 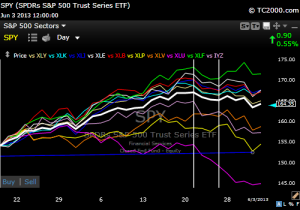 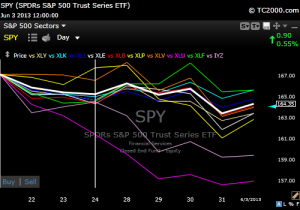 The current trend started on November 15th and has been tested by the the ‘fiscal cliff” issue bottoming on December 28th, The February 25th low pivot point was prompted by FOMC rumor of withdrawing stimulus, Cyprus on March 14th and the April test on economic worries.  The original target for the move was 1550-1575 which has been obtained. The uptrend is now in question with the current activity and a potential rolling top. Watch and don’t be fooled by the analyst… charts don’t lie. 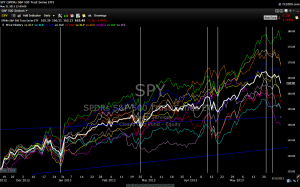 Technology (XLK) – The pullback from the move higher tested $31.40 as support and held for now. If support holds $31.45 it would validate some leadership for the sector in the current pullback. Otherwise the shorts will be looking for the opportunity. Developing a wedge consolidation pattern at the end of the chart. Gained on the day, but still in trading range.

Consumer Staples (XLP) – This was the first big break lower for the major sectors. The drop below support at $40.75 was a big negative and move for the sector. Short setup if it continues below the $40 level. The move is a result of higher interest rates and pressure on these stocks, not to mention the valuations were ahead of themselves. Monday managed a 1% bounce off support? Watch.

Healthcare (XLV) – This was another break lower in the major sectors as XLV failed to hold $48.75. Watching to see how Monday plays out, but the $47.93 level is the key support. Watch to see how it follows through and if any opportunities result from the move. All of the subsectors worked lower within their respective consolidation ranges.

Energy (XLE) – Big pullback on Friday as crude and natural gas broke lower. The $80 support is in play and the downside from there is the big question mark. Watch to see if it holds or goes lower. Held support on Monday, watching…

From the May 17th high we have seen the dollar gradually decline. The last three trading days the downside has accelerated and today we added UDN (Two Egg Model) as a position. 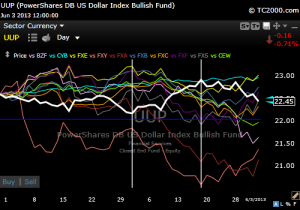 Treasury Bonds – Complete reversal on the yield has pushed the bond lower and broke below the previous low. Not a place to be other than short the bond. TBT. Hitting against March highs again at $69. Raise your stops and look for a short term rally in bonds and a test back to $66.50 on TBT.

I have moved the starting point forward on the chart to May 1st as a potential uptrend. As you can see that didn’t happen and DBC has moved sideways since the start point. PALL is moving higher and leading the metals. The balance of the sector is vertically challenged. CORN since May 21st has been trekking higher and one to watch. (CORN break above $41 positive.) Watch for $42.25 to hold on CORN. Be patient and let the winners define themselves before going into sector. Thursday added positive move in gold, silver and base metals. DBB – the base metals are attempting to move higher the last week. 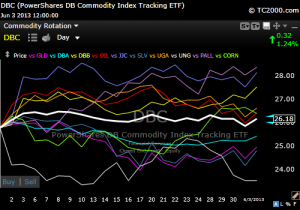 Global markets have shifted to the downside over global economic slowing. The May 21st pivot point lower has been more dramatic than the US markets, but the pivot correlates to the struggles starting in the US markets. The Asian connection is hurting the overall index. The chart below shows the shift over the last week plus on the downside. We don’t own any positions in the global markets and for now I am still willing to sit on the sidelines. 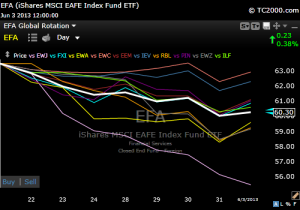