Positive start to the day ends without much change on the day. Investors waded through to hang tough, and keep moving forward. Do stocks continue higher or test? That remains the primary question on the week and we will see what tomorrow brings. The trend is higher and we have to remain patient with process.

Gold remains a topic of choice for many as the metal flirts with near term support. $1635 is the key support to watch, and $1750 on the upside is the other side of the trade. Simply put, the trend in gold is down, to trade the upside in gold is a fools game without some change in the trend. Equally the short side has stalled at this point and tight stops would be prudent.

The rest as they say is history.

The index made a small move to 1461 on the close and remains near the recent highs. There is still the possibility of a test near the 1430 level before making a move through the 1470 level. Not making any predictions, but this is something to watch short term. Filtering through the sectors of the index today we find Healthcare (XLV) broke to new high closing above the $41.30 level. Industrials (XLI) gained 1% on the day to push back to the high. Basic Materials (XLB) closed at a new high. Technology (XLK) held above support at the 200 day moving average. The balance are treading water near term.

The chart below has a starting point of 11/15 which was the pivot point for the uptrend. The first vertical line drawn on the chart shows the starting point of the drop relative to the fiscal cliff issues. The second is the rebound that started January 2nd. Still moving sideways on the week and looking for the leadership on the upside to continue. 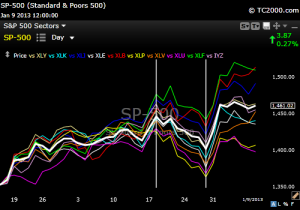 The chart below is the 28th of December starting point looking for current leadership on the renewed push higher. OR the leadership on a reversal short term. 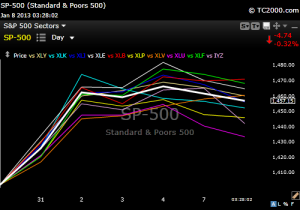 The move in basic materials, healthcare and industrials shows very clearly on the chart today. There is some rotation in leadership based on the move. This is what we will be watching tomorrow.

The VIX index remains at the lows near 14. No signs of anxiety yet.

NASDAQ Index – The index bounced back close to 3110 last week and has continued to hang tough. Watch the large cap technology stocks for clues to the short term direction. We need to clear resistance at the 3110 mark short term. A test of 3060 support isn’t out of the question.

Financials – XLF was one of the stronger sectors during the selling and has moved to a new high at $17. A test back towards $16.50 would give better entry point. Downgrade to BAC today put downside pressure on the sector. Watch to see how it plays out short term.

Dollar – The dollar made a bounce off the lows as the Fed minutes gave reason to believe that QE funding would stop. That hasn’t happened, but the dollar has been a benefactor. Watching resistance near the $22 level on UUP. Needs to make a definitive move to the upside in order to play.

Euro – The euro is testing lower on the rally in the dollar on Thursday. The support at $129.35 is in play currently and break is the exit point for the play on the euro.

Treasury Bonds – The yield on the 10 year held at 1.87% and the 30 year to 3.07%. The downside risk in Treasury bonds is in play, but they are poised to bounce short term. TLT is testing support at $118.40 and could provide a buying opportunity. (SEE SECTOR WATCH LIST)

Palladium and Platinum remain the better bets on the precious metal side.

WATCH: EFA – The uptrend short term continues, but getting a small test short term. Stick with the uptrend play for now as it holds support.

WATCH: FXI – China has firmly established the uptrend off the November low. However, there is a test of the move in play today. The gap down to $40.50 is due to news about the consumer. Watch and use $39.75 as key support level currently. HELD and bounced on Wednesday.