I will chalk up today’s action to one word… ‘Interesting’. Some of the leaders in the market currently don’t match well with the current economic data or what companies are stating relative to growth in the consumer. The most interesting move the last few trading days has been the move in the retail sector. Using SPDR Retail ETF (XRT) as a barometer it has gained 3% and technically reversed off support a the $83.75 mark and closed today at $87.13. The high of July 3rd at $88.76 is now in view and the upside is in play. If the ETF clears this level and holds it would be successful on the fourth attempt to break higher dating back to November 2013 first attempt.

Today the sector was driven by a new CEO appointment at Aeropostale (ARO) pushing the stock up 19.4%. TJ Maxx (TJX) was up 8.6% on solid earnings report. Urban Outfitters (URBN) was up 4.5% and American Eagle was up 4.2%. Before rolling out the wheel barrel of money to put to work in the sector I would be interested to see how the after-hours earnings news goes today. It is earnings season for the retail stocks and the there have been some positive announcements that are acting as a catalyst for the sector which has seen plenty of disappointment of late.

Technically we say take the trade, manage your risk with stops and see how it plays out going forward. There is plenty of positives in the technical data points and they would lead you to positive trades in the sector. But, as the fundamentals are not in alignment with the technical data currently we would manage the trade and see how the fundamentals unfold. Currently this is a sector that has been out of favor and is now finding buyers willing to put money at risk on the belief things will change moving forward. As you can see on the chart this is not the first attempt for investors to believe things are improving. Will the fundamentals validate what is taking place in the stocks? Only time will answer that question. 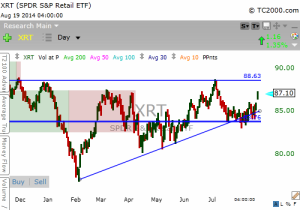 Another move on the day that was worthy of notes is the homebuilders. Again it was news that pushed the index higher as the housing starts and permits were well ahead of estimates. The news on Monday showed the home builders index moving higher than last month. There is a shift in the data from negative towards improving. That is all investors needed to hear to put money to work in the sector overall.

Fundamentally the earning period for the first quarter were not bad. There were improvements in several of the builders and the outlook was on the positive side. In fact, a quick look at the chart below shows a bounce in late May through June that was a reaction to the data points. However, the FOMC meeting and speculation over higher interest rates caused analyst to project a negative outlook for the sector and a slowing across the board. To this point that has not occurred. In reality, the opposite has happened… rates have moved lower and enabled more buyers to take advantage of the lower rates and lower payments.

There has been a big boost as well in the apartment building and rental markets. This has helped the sector as well with Americans still needing to have a home to live in. Many analyst and investors believed the bottom was established for the sector in the fall of 2011. However, that move peaked in April of 2013 and we have moved sideways since. There is still plenty of work to do for the uptrend to resume and the sector to break higher, but there is some hope being spread around in the form of buying from investors. 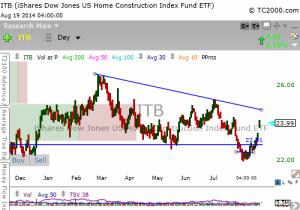 In addition to the homebuilders ETF (ITB and XHB) track the ripple effect of what home owners will buy in addition to their new homes. Home Depot announced positive earning today and they gained 5.5% to break from the eight months of consolidation. Positive news will reach farther than the immediate stocks and we should look across the spectrum for the best ideas to put our money to work.

The short term bottom has benefited the leadership of the markets overall, but it also starting to show some broadening of the effect. Both retail and homebuilders are consumer driven… if they fundamentally show signs of growth and reversal in stock prices it would be a positive signs for the economy and potentially another leg higher for the markets overall.