It would be unfair to say that the retail sales data for January will set the tone for the markets today, but they could do exactly that if they fail to impress investors. The same store sales data last week was positive, but the expectation for sales in January is flat or zero percent growth. Any large disappointment on this front could produce some selling from investors. On the other hand, some positive news would offer a catalyst that buyers have been looking for. Thus, watch, listen and act accordingly.

Today I want to look at some news and sectors driving stocks currently.

Starting with one that is not moving higher. Is gold really at a critical point? Technically speaking… yes. A break of support would put gold in a defensive position relative to the buyers. Simply put, the sellers would gain the upper hand, and without some inflation or hard evidence of currency devaluations accelerating, buyer would be less inclined to step into the metal. The long term chart below shows the triangle pattern of consolidation for the metal currently. You can see, neither the buyers or the sellers are in control at this point. Watch and let it play out before making a longer term commitment to gold. 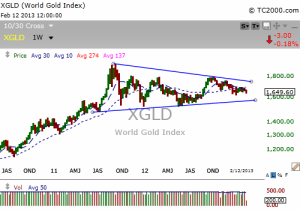 Goldman Sachs report shows more construction jobs on tap for the housing sector. Construction spending has been rising finally and the home-builder sentiment has been rising as well. In unison with that data the home-builder stocks have gained more than 100% over the last fifteen months in many cases. XHB, SPDR Home Builders ETF jumped 3% on Tuesday in response to the optimistic forecast. This is a sector in which many analyst have called for a pullback or correction… It looks like investors are once again thinking differently about the stocks.

The technology sector continues to struggle as the large cap stocks continue to disappoint Wall Street. Apple was the poster child for disappointment the last two quarters along with Intel  and others. Is Facebook joining this crowd again? Remember that after the IPO the stock fell from $34 to $18. Then from mid-November to the end of January it rose back above $32. However, since the earnings release the stock has tumbled back near $27 and was off 3.1% on Tuesday. Thus, technology as a sector can’t seem to gain any definitive traction and Facebook is facing another test of support at the $27 level. Watch for XLK to make a move above $30 if the sector is going to keep the break from consolidation heading in an upward momentum.

The energy space remains a leader for the broad index. One of the reason the US stocks have continued to do well is in the face of lower demand, due to the current economic conditions, the industry has made great advancement in technology. These improvements in technology have allowed the US to work towards independence from foreign oil. Imports have fallen nearly 25% over the last four years, and domestic production has climbed nearly 35% during the same period, according to EIA and Citi Research. Thus, this remains a key area for investing looking forward. The technology component of the sector is the most attractive as well as the production companies. XOP, IEO and IEZ are three ETFs to watch in the sector long term.

Japanese stocks slide one percent on earnings data overnight, and the yen moves higher. The weaker yen over the last quarter hurt large exporting company’s pushing net earnings lower and thus impacting the results. EWJ broke above the $10 level, but may test before moving higher. I still like the outlook for the country stocks as the lower currency levels have hurt short term earnings, but will help the country gain a competitive edge going forward.

Asia is on China watch short term. The chart of FXI below shows the shift in direction in September to start the current uptrend. That trend is still in play, but being challenged by the recent pullback. Taking a longer term view it would appear the short term volatility is worthy of our attention, but more from the view of adding the country to our allocation than running from the position. We have sold our position on the recent turn lower short term, but continue to look for the opportunity to own the fund going forward. The key support level to watch is the $38.25 mark. 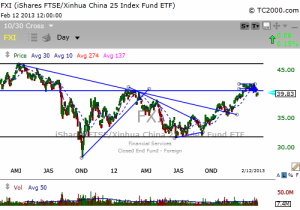 After-hours the earnings data was on the disappointing side with Buffalo Wild Wings missing expectations, Western Union guidance disappointed sending shares lower, Rackspace missed revenue sending shares down, Clearwire missed earnings as price tumbles lower, and Moody’s announced a stock repurchase to help shares move higher. Cliff Natural Resources beat earnings, but cut their dividend to 15 cents from 62.5 cents. Needless to say the stock is trading lower on that news. Watch to see what impact this news has on the markets overall as well as the sectors.