The markets open negative, but immediately see buyers step in and push the indexes into positive territory. Nothing big on the downside, but the reversal was nearly 1% early, but it failed to hold into the close. The chop remains as investors continue to dance to the headlines and trade on emotions. The VIX index rose to 17.3 early, fell to 15.7 on the rally and closed near the 16.3 mark. Not big swings, but enough to keep the attention of investors and keep the volume on the low side again today. Plenty of issues still on the table as we work through the emotions of the day.

Russia remains a talking point on the day as Poland made comment relative to the advances from Russia on Ukraine. RUSS gained another 6.3% on Wednesday to add to the 9% gain on Tuesday. The decline has been a good trade and we would push our stops near the $14 mark on the move. The uncertainty remains a challenge for the equity markets as it anticipates action by Russia. Downside risk remains in play and for now we take it one day at a time.

Earnings and merger cancellations were the big new of the day versus the economic picture. Walgreen’s fell nearly 14% today on their decision not to relocate their corporate headquarters oversea. The inversion process of which would have been to a lower tax rate for the company. However, it didn’t qualify for the inversion and the big reason for the drop was the lowered guidance on earning going forward. Time Warner and Fox merger failed to go forward pushing Time Warner down 12.5%. It was a day filled with news and it balanced out in the end with some positive and some not so positive.

Natural Gas (UNG) gained 1.2% on the day, but more importantly reversed the downside trend in play since June. Down more than 24% off the high the reversal is worth watching as natural gas prices look poised to regain some upside short term. Natural Gas stocks (FCG) has declined more than 20% on the move and is worth watching as this unfolds as well. It is summer… supplies have increased… but, the outlook is for prices to rise going into the winter months. Time will tell and watching for the confirmations on the upside are still in order. 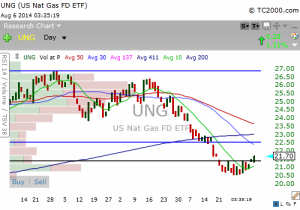 The dollar continues to find strength in the economic data as well as the global concerns. The euro (FXE) has declined to $1.34, but the yen (FXY) has been volatile against the dollar. The stronger dollar helps with commodity prices like oil. I have always been a strong dollar proponent, but it has been a long time since the Dollar Index (DXY) has traded above 81.6. Still tracking the dollar for strength near term. UUP is the ETF for the dollar.

Bank of America (BAC) gets the Treasury Departments blessing the second time around and raise their dividend five cents. The stock was up 1.3% in trading today. Banks (KBE) were up 0.5% and still attempting to find support near the $31.20 level. The rock throwing by government, regulators and consumers has not stopped. Now we have a bill in Congress for these banks to write living wills to address “to big to fail”. Yes, it is true, the government is determined to break them up one way or another and the stupidity of this proposal is beyond words. But, it does show the willingness to throw the baby out with the bath water versus just regulating and cleaning the water.

Gold finds buyers as the rumors of the Fed not timing the hike in rates correctly or the economy not being able to deal with the hike in yields and stalling going forward. That is a fancy way of saying the market is trading gold on inflation concerns. The 1.5% gain today was nice, but didn’t solve anything relative to the longer term outlook for the price of the commodity. A move above $126.50 on GLD would worth our attention short term for a upside trade.

Interest rates started lower on the day producing a rally in bonds (TLT). That move failed with rate ending flat on the day along with the bond. The outlook is for yields to rise in advance of the Fed moving rates early next year. The fear factor from geopolitical risks are outweighing any reality of rates moving higher near term. This remains an issue to watch moving forward.

Overall not a great day for stocks, but they did stop the bleeding from Tuesday’s selling. We will continue to take it one day at a time and avoid the temptation to speculate on direction. All of this will work out and the direction will unfold clearly. Cash remains a sector we like and one that keeps our sanity in check. Be patient as this all unfolds.