In our webinar last Thursday night we discussed some simple steps for trading with sector rotation. The feedback was very positive from those who listened to the live presentation, and I appreciate the input and ideas for future webinars. One topic that I threw in at the end of the meeting was long term positions and how to ‘trade around a position’. The concept of long term buy and hold is difficult in today’s active trading environment for one, and additionally, the increased volatility driven by market events have created deeper test than most investors can stomach without panicking. Thus, we have used a strategy of ‘trading around a position’ for the last 12 years in our professionally managed accounts allowing us to manage the volatility and downside risk during specific market environments.

The process is nothing more than understanding the position you own relative to time horizon, investment objective and fundamental data. Yes, I said fundamental data. If you are going to own positions longer term you need to know what is taking place fundamentally with the company and how that may impact the future price of the stock. For this example I am going to use Apple (AAPL) stock. As you can see on the chart below in December of 2011 the stock was trading at $365 level which was still part of an uptrend. The pullback that offered an entry point for buying the stock at $397 was the entry point for this illustration. Moving forward the stock moved up to the $640 range, and at this point the passing of Steve Jobs had a negative impact on the stock. This is where trading around the stock or hedging the position comes into play. Fundamentally there was nothing wrong with the stocks, but the fear of it running well without Steve was putting pressure on the downside. To hedge the position you could simply buy insurance in the form of a $640 put option. That insurance more than paid for itself as the stock tumbled to the $520 level. 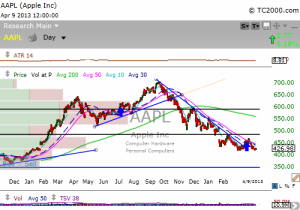 After finding a base or support the stock regained its footing on new product release. With the bounce off the low, you would then sell the put option for a gain of approximately $6000 per contract or on 1000 shares $60,000+/- gain. The stock was then at $570 or down $70,000 on the 1000 shares from the high, making our break even from the high at $580. The stock then went to $700+ adding another $120 per share to the position. At this point based on the data below our stop was raised to $660 in the event of a decline relative to the fundamental data getting worse. In addition we bought the $510 leap put option for 2014 on the stock. Not believing it would actually get there short term, but believing if the fundamentals continued to disappoint that the stock would sell off over time. Remember the goal is to hold the stock long term, but also protect our principal and gains.

However, part of the turn lower off the high in October was earnings disappointment relative to slowing revenue. This was the second following the August data that was disappointing on earnings and revenue. Thus, a trend was emerging fundamentally. Apple’s earnings and revenue growth was clearly slowing and there were no new products on the horizon to salvage the weaker reports. By the time they made another disappointing report in January the damage was done and stock continued to fall to the current support levels at $425.

The point of this example is that you can make money on long term positions by trading around those positions with the focus on preserving principal and keeping your gains. Remember if you are focused on the long term event of the stock or ETF you have studied and understand both the fundamental and market events surrounding the position. That makes understanding what the position should be valued at longer term by investors. That gives clarity in shorter time frames relative to the current events taking place. In the case of Apple, as earnings continued to disappoint it was only a matter of time that investors would throw in the towel and start selling. Thus, you can use options, shorting or trading strategies to hedge or protect your principal and growth in the position. Yes, you can simply sell the position and buy it back at a future point when the data is more attractive, but most investors tend to move on or emotions get the best of the process.

There is nothing wrong with long term buy-and-hold strategies for investing, but you need to have a defined strategy for managing the position relative to the short term market events. This will give you peace of mind during corrections that you are hedging the risk as well as maintaining your principal investment. Long term trading is not a dead art, it has just been modified to deal with the current market environment of higher volatility and shorter term investors.

You can view the webinar here Portfolio Management. Be sure to check our upcoming webinar schedule to catch our next program.