Selling accelerated this morning as fear over the cliff began to sink in for investors. As I stated in my morning notes the reality of the cliff is getting closer, but it also buffered by the hope that something will be done to avoid the complete plunge. The late afternoon rally came on the heels that Congress will meet on Sunday to attempt to pass a new resolution to temporarily deal with the impasse.

The Dow dropped below 13,000 early in the day, but managed to erase most of the 150 point decline to close  above support at 13,096. Likewise the S&P 500 index rallied back to close at 1418, with Materials posting the largest deficit on the day down 0.3%. Nothing resolved, but the two things that remain a constant… first, if there is no deal on the budget, the markets will correct as a results. Second, if there is a deal on the budget the markets are poised to rally on the news. That makes for a tough investment environment. Thus, why I am cautious and willing to be risk adverse at this point versus attempting to guess the outcome.

Global markets remain the leaders when you scan the ETFs. Money has been willing to rotate as those markets have more clarity than the US currently. They have their own issues going forward, but for now money is willing to migrate to where it is treated the best.

The index moved near the 1400 level of support today adding to the downside move. The late day rally however, put the index back at 1417 on the close? A close below 1413 would impact the current trend by establishing a lower high, which we avoided today on the rally. The string of higher lows being broken would be a negative and the uptrend would be in question short term. It would also break the 50 day moving average.

Investors are still looking for some answers relative to the cliff, but that is becoming a bigger obstacle than originally thought. The first three days of the Santa Rally haven’t been good and time is running out for a positive results for the rally. With the meeting in Congress on Sunday, I am not giving Santa much of a chance short term.

The Scatter Graph below has a starting point of 11/15 which was the pivot point for the recent uptrend. The leadership is being questioned as the downside remains for the fourth straight day. Consumer Staples and Utilities are leading the downside move. Basic Materials made a solid move higher on Wednesday, but the vertical line shows the results for Thursday and no real movement or change. The downside is starting to build a following and we added SH to our S&P 500 Model as a hedge. Manage the risk short term. 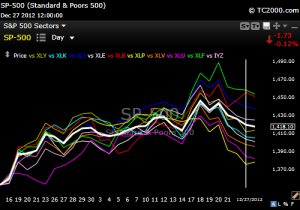 The VIX index jumped above 21, but closed at 19.50. This remains a big negative for the index and shows the current anxiety building from investors. VXX closed flat after being up nearly 7% at one point on the day. The clear move higher for the index is a negative sign for stocks and something we have to watch looking forward.

NASDAQ Index – Stalled in a trading range of 3030 on the upside and 2960 on the downside. The attempted move higher last week was negated by the move back into the trading range. Today the test of the lower end of the range was in play as it actually moved lower, but closed back above the support. The downside risk remains in place, but let it confirm to the downside for now.

Dow Jones 30 Index – Similar to the NASDAQ the index tested the top end of the trading range at 13,300. The support is 13,080 short term was broken today, but the close was back at 13.096. This is not the move we wanted to see short term, but it is reflective of the risk in the broad markets short term.

Small and Midcap Indexes hit stops last week and we are still interested in the upside, but for now they have to hold support and make an attempt to offer some upside leadership. On Thursday the downside leadership was more of the direction. It did reverse the intraday selling, but remains a point to watch going forward.

Financials – XLF made a solid move higher last week, but continues to struggle with upside leadership in the face of the broad markets selling. The pullback test near the $16 mark is worthy of our attention, and equally the upside is being tested. Watching for a play on the resolution to the fiscal cliff.

Basic Materials – XLB made a solid move back to the $36.85 resistance. Tested the $36.80 support and bounce back near the high on Wednesday. The outlook is positive, but the risk is high overall. Watch for some clearly defined direction short term.

Dollar – Downtrend remains in play, but a bounce off the low has my attention short term.

Treasury Bonds – The yield on the 10 year fell to 1.71% and the 30 year to 2.88%. The downside risk in Treasury bonds remains, but you have to respect the current fear factor. TLT broke support on the downside, but bounced back above the $122.50 level. watching the potential of a bond rally with all the negative talk on stocks short term.

UNG – Natural Gas broke support and move lower to $18.70. Look for a bounce off the lows near $18.70 short term? We did get a small reversal, but it is now set up to rise higher. Watch for upside play on a move above $19.75? Testing lower again.

UGA – Gasoline fell to the 200 day moving average and has bounce off support. Bounced back to the $58 resistance level and broke higher on Wednesday. This is not what many expected, but the bounce and move has been a solid trade short term. Held the move on Thursday… upside in play.

GLD – Since September 2011 Gold has not eclipsed any of it’s previous highs. GLD resistance is at $175. We are in the midst of a test of $161 on GLD and break below is a clear short signal for the metal. GLL moved above the $62 entry point and holding.  The downside play is the direction we are watching.

DBB – Base Metals failed to hold support at $19.10 after a positive move on the upside. This is an interesting development after the move in Steel. SLX has been the trade on the upside along with the mining stocks in XME. Watch the overall move in the based metals, but take the play in the leaders. The bounce keeps this interesting for now. Watching for plays in the sector.

The NASDAQ Global Market Index (NQGM) struggling to get above the 200 day moving average. The consolidation near the high is worth watch for a direction indication short term. The global markets remains a positive among investors short term. Money flow into the country ETFs has improved along with the upside gain.

WATCH: EFA – Moved above $55.20 resistance and the uptrend short term continues. Stick with the uptrend play for now as it holds support. The uptrend remains in play for the developed country ETF.

WATCH: DXJ – Japan total dividend ETF broke higher, tested the support of the 200 day moving average and has moved higher. The break from the trading range was a positive trade entry at $33.25. Manage your risk and raise stop to $35.50. Falling yen is driving the stocks higher. Some topping in play – manage your risk.

Uncertainty about the sovereign debt issues are fading as the global outlook improves. Still plenty to be concerned about relative to growth, but the fixed income side is attractive for now.