The major indexes posted another intraday reversal off support. The chart below is the five minute chart for the S&P 500 index. You can see the low at support near the 1400 mark and then a move back to the 1415 mark. The first test was the 1386 support level intraday with a reversal. The bottom line is each reversal has brought buyers into the market. Right or wrong doesn’t matter the simple fact is traders are willing to jump in at support. This would lean towards the start of the Santa Rally. 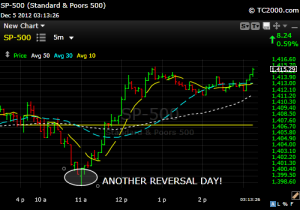 The ADP Report was lackluster posting 118,000 new jobs versus 157,000 in October. Yes, as we predicted the reason for the lower number… Hurricane Sandy! You knew it would come into play at some point and what better place than the employment data. Productivity improved up 2.9% for third quarter.

Factory orders climbed 0.8% versus the 0.1% decline expected. The number was positive since non-durable goods increased 1.1%, and non-defense capital goods rose 1.8% for the month. Again some positive data to help the market regain from the early selling.

Yesterday’s post: Still applies as we saw today with the reversal

The index moved lower in early trading, but managed to work its way higher on the day (see chart above). When it was all said and done the index closed up 2.7 points to 1409 (Monday’s close). The Scatter Graph below has a starting point of 11/15 which was the pivot point for the recent uptrend. As you can see at the end of the chart the sideways movement depicts the confusion from investors. Today note the intra-market confusion. Materials and Technology down more than 1%. Financials and Industrials up more than 1%. Apple gets credit for the technology selling and Freeport-McMoran gets the credit for the materials dropping. Bank of America jumped started the financials and Cummins lead the industrials. Mixed day with sectors reacting to the negatives and the positives.

The chart is showing rotation with the materials now leading the downside. Technology moved lower on the aggressive selling in Apple and worth watching near term. Consumer Services has dropped as well and has my attention. On the upside Utilities made a move off the lows, tested for two days, and is not back on the upward trek. The market wants to move higher, but it can’t get all the parts going in the same direction.

Now we are looking for some solution to the fiscal cliff and the economy to keep the upside trend alive. We need some clarity going forward, thus be patient for now and take what the market gives short term.

VIX index is rising and worth watching as the sideways movement looks for direction up or down? 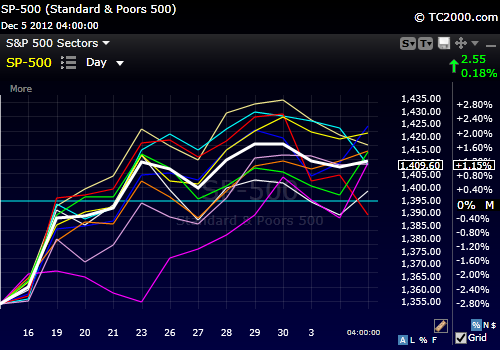 NASDAQ Index – Tested lower again as Apple becomes drag on the index. With the stock off 6.5% on the day it kept the index in negative territory versus the gains on the S&P 500 and the Dow. We hit stops today exited our positions

Dow Jones 30 Index – The bounce back to the 200 day moving average is a positive, but now we need to make a move above this level short term. The selling today wasn’t got our attention early, but managed to bounce back later in the day.

S&P 400 Midcap Index – The bounce off the low has now returned to the top end of the previous trading range. A break above the 1000 mark on the index would a positive and a opportunity to trade the sector. Be patient with the entry as this unfolds. Another volatile intraday trading day. Watch and manage the risk.

Dollar – The dollar sold lower and broke support at the $21.95 level on UUP. The dollar index (DXY) pulled back to support at 80 on Monday and then broke lower on Tuesday to establish the downtrend. The downside is firmly establish for now on the buck, watch the small bounce on Wednesday.

Euro – FXE is poised to move above the $129 mark and challenge the $130.60 mark. Got the follow through on the upside to confirm the downside play for the dollar Monday. This produced a short dollar and long euro trade opportunity for about 1.5% ROI short term. We are only short the dollar as a result of the gap higher on FXE.

Yen – FXY tested support again at $119 and bounced two days and reversed to $119 again. Not bounce for now. We will watch to see how support holds?

Treasury Bonds – Reversal short term with yields up on the 10 year to 1.61% and the 30 year to 2.78%. Watch as the yields move lower and test support short term. The drop results in a push higher in the price of the bonds, and the upside trade with it. Stocks have floundered, but the bonds are reacting as if they sold off again.

WATCH: TLT – Gapped lower and then retraced it all. Wedge pattern setup. Watch for the directional break from the setup to give guidance on the trade. A break lower would set up the short play in TBT.

WATCH: SLV – Sold positions on the reversal this week. Watching to see if the downside creates a short opportunity.

WATCH: FXI – China is testing the gap higher and watch for the $36.65 level to hold as possible entry play short term. The economic challenges facing China moving forward are many, but investor are willing to look past that and believe in the trend. The PMI data was positive on Monday, but the move was lower? Watch for trade on the break from the consolidation. Gap higher on Wednesday as money rotates into the ETF.

WATCH: TUR – 59.20 support held and solid bounce to maintain the uptrend. Look for trade entry on test of the move near the $62.40 mark for now. Monday and Tuesday produced the move higher and looks ready for a continued move short term. Still climbing – raise your stops.