Another day of nothing – early buying, some selling and a flat close. The broad indexes are fighting to hold support and for now investors seem content to let that take place. Auto sales were disappointing for the most part, but then that fits with the rest of the data that has been reported over the last four or five months. And it was all ignore again after some minor reactions in the market.

One headline stated that the Senate was hard at work on putting together a plan that would avoid the tax-hikes and deep spending cuts on the budget. However, that isn’t likely anytime soon and certainly not prior to the election. Thus, the House and Senate will only have six weeks to come up with a concrete plan. Thus, another case of waiting until the last minute to make it into a crisis. This is one of the major worries for the market looking forward.

The negative focus of the day came from Spain. The request many thought would be any day for aide has been deferred until some unknown time. Thus, the uncertainty of how Spain will deal with current debt and banking issues remain unresolved.

S&P 500 Sectors-to-Watch – The index has picked up directional volatility. The last week of trading have been up and down. We remain above the 1430 support level, but nothing is safe at this point. The tug-o-war has begun for the markets anew. What is going to be the catalyst and which direction will the market take going forward. That is the primary question and we will have to be patient and let it unfold.

The worry factor is in play and showing up very clearly on this chart. The worries about Europe, poor economic outlook and earnings are starting to weigh on investors confidence. The chart shows the erosion in the leadership of materials, telecom, energy and financials. Some stabilizing and reversion to the mean are in play. We have to be patient and let some of the noise die down and the new leadership develop. 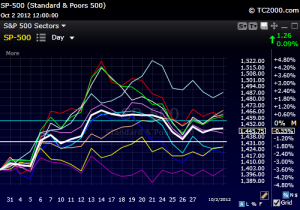 Telecom bounced along with healthcare, financials and energy today. The balance are basically unchanged with the primary question… Who will lead – Up or down?

Financials – Bounced off support at $15.45 and holding. Watch to see how this plays out near term. We held support and took the entry on the upside for on a bounce effect in the broad markets. Monitor your stops closely.

Energy –  Broke below $73 support and the 30 day moving average, but bounced along with crude oil prices last week. Does energy have more upside or is the downtrend ready to take hold. The trend off the June low is still in play short term. Watch and trade the upside if it follows through. Took the entry on the early bounce that faded, but holding.

Telecom – The leadership of the market tested lower again on the day, but the uptrend is still in effect. Watch for the opportunity to put the play back on with a reversal back to the upside. Watch the 25.22 level of support to hold near term. The parts are moving and they are a equal opportunity. Still not enough to push through the entry point.

Healthcare – The sector continues to push gradually higher, but is testing the move higher. IHF hit at new high on Tuesday and is providing some leadership for the sector. Pharma is still struggling and XPH is at key support near $59. Hold positions and manage the stops.

NASDAQ Index – The index has been under pressure from the large cap technology stocks selling. the bounce was enough to off set any short opportunities for now, but watch the support at 2782 to hold. Added the short trade if the downside develops.

Transportation Index – The transports are key indicator for the health of the economy. We are tracking this to see how it compares first, with how the market is doing relative to the sector. Second, to see if the sector is reflecting the economic data. IYT, iShares Transportation ETF is testing the key support level at $86.75 and this is the number to watch short term to confirm a move below support. Thus currently we see the index reflecting the economic data more than the market overall. Negative sign for stocks.

Dollar – The dollar, like stocks, is being pushed up and down based on the daily sentiment towards Europe. The downside pressure on the dollar has met support currently and any hope of the dollar rising is tied to Europe continue to provide a fear factor. We got the bounce off support and now we watch to see if the dollar resumes selling bounces higher. Be patient and see how this plays out.

Treasury Bonds – TLT sold to $118.25 on the Feds stimulus announcement. That support level held and the bounce off the low is gaining momentum relative to the uncertainty in Europe. Our trade on the move off support is working short term and our stop have been raised to reflect the move higher in bonds. We took a small position in TLT on the move above $122.45.

4)  Commodities: Gold snapped back and held. The break lower was temporary, and we have to watch and see how it play out at resistance. Gold miners bounced back from the selling as well. Silver held support on the bounce back also.

DBA – Broke below the $29.50 support level as agriculture sells overall. Small bounce on Friday, held today and showes there are some buyers still in the sector. Watch the downside risk short term. If the bounce develops it may be added to our watch list.

OIL – Bounced on the news in Europe back above $91 on Thursday. Watch support to hold at $90 and the resistance at $100. could offer some trading opportunities as a trade.

5)  Global Markets: The global markets resumed selling on the worries in Spain and Greece. They bounce on Thursday relative to assumptions about Spain. Those assumptions reversed again on Friday pushing the EAFE lower along with support near the $52.80 level. Trouble brewing!

6)  Real Estate (REITS) – The sector tested the recent high and support is holding at $64.20 (IYR). Watch your downside risk if you still own this sector. We are looking for upside play if support holds. The downside move today was a negative for the sector.

Spain as we have discussed was a potential issue for the broad markets. The uncertainty is starting to play out currently and we have to be aware of the downside risk it poses. Nothing has been officially done and all the talk is nothing more than rumors. The real answer will depend on the deal with the IMF and the ECB. EWP tested support at $27.60 and holding. If you like short plays this is setting up based on the direction. Thus, we are getting some answers on how this issue will impact the market globally and domestically in the US. Still all rumor driven, and we will continue to monitor the situation.

China was moving on infrastructure stimulus, but the spat with Japan derailed the progress along with economic worries. Watch FXI as the up and down impact of news creates some short term volatility. This story will unfold into a upside play if the stimulus works or a downside play if the sentiment shifts. The current volatility is tied into the issues above with Spain as well as the uncertainty for the economic picture in China. Still looking for the directional trade as this all unfolds.

The economic picture remains a mess plain and simple. The stimulus in play has masked what the true impact should be to the equities market. This is a big concern going forward and one that will eventually get priced into the markets. The data continues to decline as seen in the reports. As the quarter ends we face a new round of data and earnings. If the preliminary analysis is correct, earnings for third quarter may be another negative for investors. We have to prepare for the worst and hope for the best. Either way keep your focus and monitor the data relative to the overall goal and objective.

What am I watching now:   Leadership following the FOMC stimulus on Thursday (9/13) is what I am tracking currently to get pulse on the impact and opportunities from the stimulus. Scanning this at the end of this week resulted in the following:

Digging further the following are some opportunities we are adding to the watch list for next weeks trading:

1)  SLV – tested support last week and is now in position to move higher watch for the break above the previous high.  2) Oil bounced off support at $90 and closed the week near $92. USO is play on move above resistance and XLE above $73.80. 3) Bank of America entry on test of support and move back through resistance to continue the uptrend. 4) YHOO on move through the top of the channel. This is a opportunity on the new CEO leading the company back to life.  5) MSPD gapped higher and is consolidating. Looking for a break above the $3.55 level for entry and trade.

Watch and play according to your risk tolerance. Everyone has different trading styles and you have to find what works for you and your personality. Don’t put yourself in positions you don’t understand or take risk you can’t tolerate. Not every trade results in a profit, but controlling your downside risk determines your long term results. Trade sm