Most of the indexes found the green lights on the quote screen today. It wasn’t overly impressive, but it was positive. The need to find a catalyst remains for either direction. As we have covered at length the last week, neither side wants to own the direction. As this continues to unfold with earning season the winners are rewarded, but misses are punished.  Below are three of the major indexes, there respective patterns and the need to let them unfold prior to making any major decisions on direction or commitment of funds. The race will be won by those patient enough to let the opportunities present themselves with clarity. Chasing rabbits never ends well.

Russell 2000 Index shows a solid uptrend channel. April 15th the index hit a new high and reversed on a gap lower. It has not filled the gap or challenged the previous high on the current buying. The volume has disappeared and if it doesn’t find the upside momentum a reversal has a better chance than the upside. Small caps were leading, but the stall  near term is never a good sign. 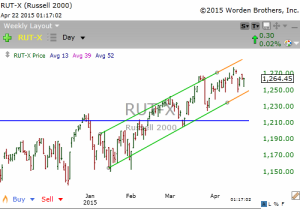 The Dow Jones Industrial Average is in a consolidation wedge. The test lower last week is still in play and MACD and stochastic have both moved lower showing a loss in momentum. The 50 DMA is in play and the trend of the moving average is still up. Large caps have struggled of late and earnings are not helping the trend.  The advance/decline ratio is almost even which is reflected in the chart as well. 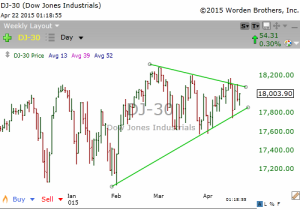 The S&P 500 index is in a consolidation wedge as well, but the upside is holding up better on the indicators and the chart. The uptrend line off the October low is in play along with the 50 DMA. It is decision time for the large cap index. A break to a new high with a solid follow through would do wonders for the broad markets overall. Earnings have been mixed in the financial sector putting pressure on the index. Looking at the ten sectors which make up the index the one thing that jumps out is the lack of leadership off the March 11th test lower. That is not a good sign. Leadership is a key to gaining upside momentum Technology has produced back-to-back days of leadership… maybe it is ready to lead the indexes higher. 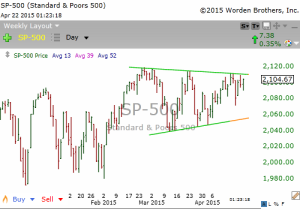 The DJ Transportation Index made a move that was encouraging for the above indexes to find some momentum… at least based on the Dow Theory. As seen below the support at $154 on IYT held several time over the last four weeks. It has now managed to move above the $157.50 resistance in the same time frame. Next up the 50 day moving average. If the transports can gain some upside momentum that would bode well for the broader indexes going forward. 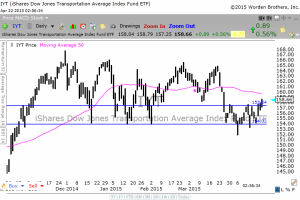 The conclusion of the charts above shows clearly something needs to give soon. We started the week looking for a catalyst from earnings or economic data and we have not produced anything of value to this point. Volume remains flat, earnings are mixed, economic data is weak to mixed, analyst are mixed with both sides stating their beliefs, and it all comes down to finding clarity of what lies ahead for growth. Too many unanswered questions and too much speculation around what if’s and what for’s. Let it unfold as we continue to say… patience will be the best course of action until the market put’s the cards on the table.