Very interesting reaction to the Jobs Report on Friday. The initial move was higher, but then some selling and a rally back on the day. That is not a positive for the current upside in play. Watch and protect against the reversal short term, otherwise we continue to go with the trend. Scanning for rotation we did see some interesting developments on the day.

It’s the weekend! We have plenty to review and scan to determine the strength of the move higher this week. Bottom line is it finds a way to continue higher, and you go with the trend. Rest up for next week it promises to be fun.

Today the Jobless Claims and Chain Store Sales were released.

The jobs report is out tomorrow and will set the tone for the trading day.

The February 25th low pivot point remains in play this week. The chart below shows the leadership from XLY accelerating to lead the move. XLB playing catch-up after some selling the last two weeks. , XLF regaining some leadership poise. XLU still accelerating higher XLK played into the leadership move on Tuesday. Looking for the upside to regain momentum if the uptrend is to hold short term. (FLAT on Wednesday and Thursday, but still watching the upside. Financials and Basic Materials remain in an upswing.) 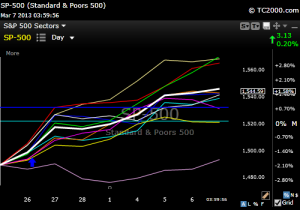 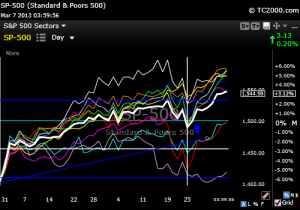 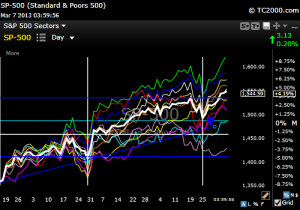 Telecom – The sector has finally made a bounce off the low and is attempting to head back towards the February highs. Added to the S&P 500 Watch List for entry.

Financials – Banks pass the stress test on Thursday and give the sector a needed boost on the upside.

Consumer Discretionary – Broke above the $51 resistance on XLY hitting the entry point. The consumers are leading the broader market indexes on the race to the top.

Euro – The euro (FXE) Broke support at $129.50 and moved lower? The bounce on the ECB news Wednesday didn’t last and the sellers remain in control. Watch to see if this moves lower still? (EUO short the euro)

Treasury Bonds – Bounce reversing on confidence returning in equities. TBT has been the trade off the bounce in  rates higher. Watch near term resistance on TBT and support on TLT.

Municipal Bonds – MUB = 2.8% tax-free yield. The price of the bonds broke the support at $111.30 mark on Thursday. Big negative for the bond and clear exit signal on the move. 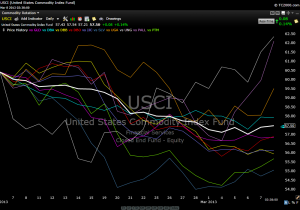 UGA – Testing support at $60.50 Short play? Look for support and a bounce more than the short side.

EFA – Watch $56.90 support to hold on the recent test. The long term uptrend remains in play and support has held and the fund has moved back to resistance at the $59.30 level. Watch and trade accordingly if it breaks to new high short term.