The Chart below states more in a picture than I can in a thousand words about what happened today, but has been happening over the last four months. Volatility at it’s best. Uncertainty as it’s best. Lack of confidence define in a picture. 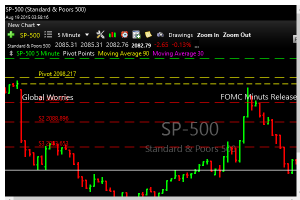 Worries about the global markets to start the day… FOMC minutes rallied, worries returned and the markets closed lower. The wheels on the bus are no going round and round… they are losing pressure and making for a bumpy ride. I am not a fan of the current environment. This week is starting to reveal more cracks in the ground and it may allow for the indexes to break support and test a new level lower.

I am not prognosticating I am speculating on what I believe. If my conviction was strong enough I would open short positions, but it’s not. That said, I do believe there is a level I would be willing to implement the downside trade on the index.  2042 is the level to watch on the S&P 500 index. Technically speaking there is plenty to be aware of should the markets move through this level of support. 4992 then 4910 on the NASDAQ index is a level of concern.

Small cap index was ugly again today as well. The Russell 200o index is testing the 1200 level of support. Break that and it isn’t pretty with 1153 next. The downtrend in the index remains in place and the support is weakening. Short side set up again.

The ten sectors of the S&P 500 index we track are shifting again. Five downside, four upside, one sideways remains the tally and that is a sideways leaning market, which is what is currently in play. If the tally shifts in favor of the sellers… reinforces the comments above.

Europe (IEV) sold lower 1% on the day. China (FXI) fell 2.2%. Emerging Markets (EEM) fell 1.2% and continues to accelerate lower. Japan (EWJ) was off 1%. The global markets continue to put pressure on the US markets as the outlook remains weak economically around the world.

Commodities are challenges by all of this as seen with crude oil (OIL) down 5.2%, base metals flat, but in an accelerated downtrend, gold (GLD) rallied on FOMC minutes? Speculation on alternative asset of choice.

Running the scans tonight shows the acceleration in the short side trades with the ETFs dominating the results for today and the trailing ten trading days. The results remain a flip-of-a-coin, but you have to be cautious about new positions and stops have to be in place on existing holdings.

We are heavily allocated in cash with the moves of late. That is the key to having a disciplined approach… takes the guessing out of the equation and allows you to implement a discipline approach to managing your risk.

All of the issue remain on the table and the lack of conviction continues to rise from my view. I hate speculation and I hate fighting the trend of the markets. Thus, my fingers are in my ears and my eyes are on the micro term (0-13 weeks) trend lines looking for a resolution in direction. Until then I am willing to hold cash and be content to let this all unfold in a form that has less risk for putting money to work.

NOTE: The following are things to watch and evaluate as we progress forward.

S&P 500 Index (SPY) 200 DMA and $206.10 are the support levels to watch again this week. Holding above the $208 entry point to add. Stop is $204.40. The triple top is still an issue relative to a ceiling on the index. No direction to speak of and content to see how this unfolds near term. Selling remains a concern and we will watch and manage the stop and the trend. Nice reversal on Monday and cleared the $209.50 mark… So much for the upside as the sellers step in and take the index back to the 200 DMA. Break lower short side could accelerate.

NASDAQ 100 Index (QQQ) $1o9.10 is support. Break I am interested in downside trade. Hold and we watch. Clearing the 10 DMA on the upside would be of interest near term. Need to let this define a definitive direction then we have interest in ownership. $109 is level to watch on the downside as short entry. Upside has stalled based on the issues facing stocks near term.

Russell 2000 Index (IWM) Ugly is the one term that comes to mind for this sector. $118.80 support and holding for now. The downtrend remains in place off the June high. Unless the sector finds some momentum to take the trend out… the downside bias remains. Watching for now. Downside back in play and looking to hold support at the $118.80 mark.

Volatility Index (VIX) made the move to 13.3 Friday. The volatility has shown up modestly on the selling, but nothing to write home about. No acceleration on the VIX, but there is a worry in the air. More than willing to watch for now. Move higher on the day hitting the 16 level intraday. Not pretty at least from a daily perspective.

Transportation (IYT) Moved back to the $148.50 level on sector earnings and testing and holding and testing… . ABCD pattern uptrending channel in place. $150 may be of interest for upside trade, but watching to see how this unfolds near term. Nice upside move and back to $150.55 resistance. $153.50 level to watch. Tested on Wednesday and holding for now.

Dollar (UUP) The dollar tested back to support at $25.10 and moving sideways in a defined range. The issues with China had some impact on the movement short term, but the dollar is still holding the upside. The dollar index DXY is sporting a double top and support at the 50 DMA. Reversed lower on Wednesday with the FOMC minutes as catalyst.

Crude Oil (OIL) Crude continues to be downside bias commodity. Broke below $43 level of support on the week and holding near the $42 mark for now. Plenty of anxiety over this move lower, but not much you can say once the speculation trade takes over the directional move. Not interested at this point in time. More selling returned and moved lower by 5% on the day? Negative sentiment.

Russia (RUSS) short side trade is consolidating and in position to break higher. $42.10 is the entry if the breakout occurs near term. Hit the entry with the move higher in the short ETF. Oil prices continuing to weigh on the country and currency currently. Nice gain on Wednesday and stop at $42.65.

Semiconductors (SOXX) broke $87.20 support again and looking for a base to build if this is going to bounce. If the downside accelerates the short entry is $84.70. SOXS $57 entry. HIT entry on Tuesday and moved higher on the selling on Wednesday. Stop is $56 for now.

Telecom (IYZ) break above $29.50 hit entry point. Watching for the follow through and upside to remain short term. Added position on Friday. Stop is $29.50. Defensive money rotating into the sector… manage the stop as this tends to shift quickly if the growth side kicks in. HIT STOP ON aggressive selling

Housing (ITB) Nice break from the consolidation on the upside. Investor stuck their noses up at the worries over the Fed hiking interest rates. Test of the $28.35 level would offer a reasonable entry point if it continues to gain momentum.  $28.50 entry. Stop $28.50. Uptrend breakout. Nice follow through on the upside in the sector Wednesday. Data was positive helping the move. Back to back data points pushing the sector higher.

Gold (GLD) the metal has been pushing higher as the uncertainty surrounding the yuan and China’s actions. Take it for what it is… a trade opportunity going forward. Hit the entry at $105.65 and that would now be the stop on the trade. Resistance at the $108.40 level ahead. Testing the big move higher to end the week. Break even stop and watching. Got the follow through on speculation. FOMC, OIL, Weak economic data globally…

Crude Oil (OIL) Short trade remains on with the downside in place. SCO at 88.90 entry on renewed selling. Sellers remain in control of the commodity with break below the $45 mark. Stop $104.  Selling back… still holding the short trade… I was looking to lock in gains if we held support at the $43 level… that didn’t happen with the move to $42.17 on Friday.  Headed lower on supply data and accelerated on negative sentiment losing 5% on Wednesday. Lowest level since 2009.

Utilities (XLU) Not an exciting sector, but one that is paying a 3.7% dividend and offers some upside as all the noise around the dividend stocks subsides. Entry $43.50. Stop $45. Trending higher and we will watch the outcome. Raised stop on the move higher Monday. Still holding move higher.

Real Estate (IYR) REITs moved off the low in June. Hit resistance has inched through the various levels. Still looking for a catalyst to break through the resistance. Entry $74.75. Stop $75 for now. Let this unfold and if the rate hike rumors return the downside may return. In need of some upside momentum. Raised the stop on the move higher Monday. Holding the move higher with small test on Wednesday.

“Vision without action is a daydream… Action without vision is a nightmare.” Japanese Proverb.