Thought of the Day:

September 11, 2001… A day we all remember, and everyone I spoke with today could tell me where they were when the planes flew into the World Trade Center. Their reaction to the news as it was reported live and watching the horrific event unfold. It is important to learn from this event and equally important to grow as a country. As we remember those who died I can only pray that we have learned from their unknowing sacrifices.

Stock of the Day:

Apple gets the prize. I cannot help but think of what Steve Jobs would say about this missed opportunity. I am not going to repeat all that has been said about the launch of the new 5S and 5C phones, we will let it go with the simple fact that they missed the mark. In basketball it would be called an “air” ball. I am not sure the shot would have even stayed on the court. We may all be wrong in our view of the price of the phones and the flop of the launch, but the stock price reflected what investors thought of the new products. The stock price fell directly to support at $465 and stayed. The 5.4% decline came on nearly two times the average trading volume and put a negative outlook on the stock short term. The NASDAQ was hit by the losses in the stock, as well as, XLK, technology sector ETF. That said, it is worth watching tomorrow as we open trading to see if the selling is done and buyers step into the stock believing in the upside story. I am adding this to my watch list to see if we get a chance to trade the stock near term.

News Buzz of the Day:

It is a toss up between Russia making the U.S. look bad on the issues relative to Syria. OR, President Obama’s speech on national TV explaining why we should attack Syria for ten minutes and the next five minutes on why we won’t? I am confused, and evidently I am not alone based on the number of article and discussions today on the topic. Bottom line for now… no attack, oil prices have dropped and stocks have rallied. Unless there are some significant changes going forward it is now just a topic of discussion versus an imminent act by the U.S. But, lest we forget, the FOMC meeting is next week and the issue of stimulus cuts will be the topic of choice and the outcome will either help the markets or rock the markets short term.

The Dow Jones Industrial Average. At one point the index was up triple digits again! Closing at 15,326 the index has added 404 points over the last three trading days. Why the sudden change after being the biggest loser and laggard in the market? Opportunity as the NASDAQ and the S&P 500 Indexes have been setting the upside pace and thus the Dow was playing catch up. Microsoft, Disney, Alcoa, United Technologies and Caterpillar led the charge. The interesting part of that is the diverse group leading the move. The close was right at the next level of resistance for the index and joins the other indexes which also face near term resistance on the charts.

Chart of the Day:

Facebook closed at $45.04 and officially hit a new high since going public more than a year ago. This is a stock we have owned since June and we are tracking the upside as a long term investment opportunity. The jump in the stock on Wednesday came thanks to the rumors of a visit to China to discuss gaining access as they are currently blocked from use. If there is any truth to the rumor it is obviously a big deal for Facebook, but it isn’t likely to happen anytime soon. Regardless the stock has been solid in it’s move to new highs and the outlook remains positive at this point. 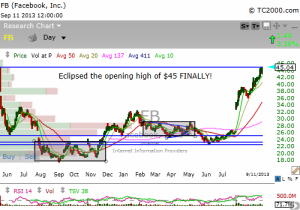 Bottom line… Markets are pushing back towards the May highs and everything is fine! No more worries about the Fed, Syria, earnings, economics or any other issues that were present two weeks ago. Watch and see how the trend plays out as keep your stops in place.