The news from the Bank of Japan gave the markets a boost at the open, but the jobless claims worried investors as they jumped back to the 385,000 mark. The open produced a rally pushing the S&P 500 index to 1562, but then after an hour of trading the index started to drift lower, but in the end closed at 1560. What gives? What happened to buy on the dip? Is it becoming sell into the bounce? Those are the questions I want answers to looking forward. What is the sentiment of the investor and is it shifting? Time will tell soon enough.

The big test will be the jobs report tomorrow. There is a silent majority that hope the numbers is better than expected to give the market an economic boost after the disappointments this week. We will know soon enough.

The scatter chart of the S&P 500 is shift some with utilities pushing back towards the leadership in the index. That shows the defensive leadership along with healthcare and consumer staples. Telecom, made a solid move today towards getting out of last place and financials bounce back for Wednesday’s selling. Still plenty to be concerned about short term, but the key is to be patient and take what the market gives going forward.

The activity on the trading day leaves plenty of short term questions, but we will have to be patient and let them all play out. The positive bias today was almost expected when you consider the current environment. Watch the jobs report and see how the market responds to the news, good or bad.

Big week for data in store. Started on negative note with the ISM Manufacturing sector falling below expectations. Today the factory orders data was positive overall, but ex-aircraft the gains were only 0.3% for February. The overall number was positive for the economic picture. Vehicle sales were up 6% and that was a positive sign for the sector.

The negative train was back as we stated above, a miss on the ISM Services number and the ADP Private Sector Jobs Report. That set up a negative day of trading and money headed for the exits Wednesday as the selling melted higher throughout the day. The jobless claims on Thursday didn’t help with the claims climbing to 385,000. That set investors back on their heels for most of the trading day.

We still have the jobs report tomorrow to deal with to finish the week.

The back and forth of the indexes continue as investor worries about the data. Last week all eyes were on the 1565 level for the S&P 500 index to hit a new high. This week we have been on both sides of that number, with the pressure building on the downside. Yes, it is crazy, but remember the buyers have been willing to step in and buy the selling patches. Today we didn’t see that same commitment even though the indexes closed higher on the day. Thus, remain patient and take it one day at a time as this story plays out.

Downside Pressure – Industrials (XLI), Telecom, (XLB), Financials (XLF) and Technology (XLK) are struggling to keep on their rally caps. They all have struggled to maintain the uptrend and that leaves plenty of concern short term. If we are looking longer term the test or pullback will be an opportunity to add to positions as it bounces off support. Look for some follow through on the stabilizing move Thursday.

Volatility index – (4/3 post) – With a jump back near the 14 level the anxiety is picking up. A break above the 15 mark on the index gets interesting short term. VXX hit the previous support, now resistance, at $20.30 and break above this level may open the way for a trade on rising volatility short term. Thursday the attempt to move higher gave up and closed back below 14. Still have the jobs report to deal with on Friday.

The February 25th low pivot point remains in play. We added the March 14th high as the next potential pivot point on the downside, but the market has continued sideways more than down. The move last week pulled the index back above the close on the 14th keeping the upside in play. However, it has struggled to hold on to that move short term. Healthcare (XLV) remains the leaders off this low. Consumer Discretionary (XLY),  Utilties (XLU) and Consumer Staples (XLP) were on a positive trek to the upside, but we have to watch for the shift currently. Stay focused and protect the downside risk.

XLB and XLE race to the bottom of the Sector Scatter Chart. Watching to see if the they hold support and bounce of continue lower. 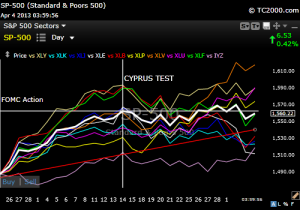 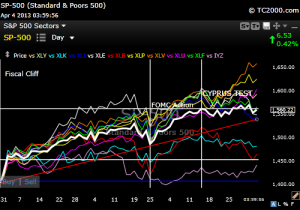 November 15th Pivot Point is the start of the current uptrend. Target 1550-1575 was attained and now there is pressure to test the move. The uptrend off the November low remains in play. The trend has now overcome two attempted moves lower to maintain the uptrend. Watch the trendline as the support on the current pullback. 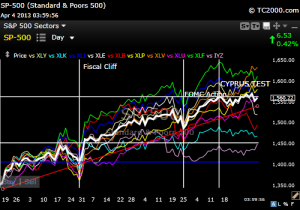 Financials – (4/3 post) – Banks are rolling over. The chart of KBE shows the current pullback breaking support at $26.50 and moving below the 50 DMA. This has impacted the financials overall as XLF moves lower. The weakness however, is owned by the banks. The regional banks (KRE) have joined in on the downside now which adds to the downside pressure. Thursday XLF bounced back to $18 and we have to watch to see if it can recover the previous uptrend.

Midcap – (4/2 post) – IJH moved to a new high on a solid break higher last week. The move on Tuesday was not as poor as the small caps, but today it joined the party down 1.1%. Watch the downside risk short term and tighten stops if you own the sector. More interested in a bounce play here versus the short side. This sector like small caps is needed on the upside leadership for the broad markets.

Treasury Bonds – The volatility in the bond sector rose short term and now the trend is higher with yields dropping again on the bond. Thus, the upside remains in play for the bond as money pushes yields lower. Be patient and let it play out short term. Raise your stops on the bond to protect the downside risk.

Corporate Bonds – LQD = 3.8% yield. The price has found short term support ($118.90)… again. The jump higher on Thursday was in response to the rotation of assets towards safety or defensive to the stock market. This is not likely a new trend for the bond, but we will take what the market gives.

Municipal Bonds – MUB = 2.8% tax-free yield. The price of the bonds broke support and the chart is attempting to bottom or build a base. The bounce is is from money rotating towards safety? We will see how it moves from here.

Convertible Bonds – CWB = 3.6% yield. Price had been moving higher on the rally in stocks. Starting to see some selling off the highs and testing the 50 day moving average as support. Watch stops and protect your gains.

Natural gas still leading despite the test of the upside. Looking at the balance of the parts shows the downside is firmly in play. 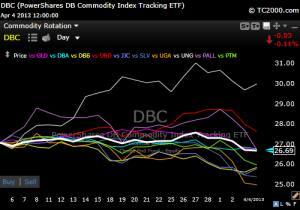 Global markets tested lower on the news in Europe and continue to trade slightly lower since the high on August 15th. We have moved the graph below to that as the start date to gain some insight into what is leading or rotating currently. As you can see Mexico (EWW) has taken the leadership role currently.  Japan (EWJ) had moved lower, but that bounced back today. The balance is status quo for now and not much to like or dislike at this point in time. 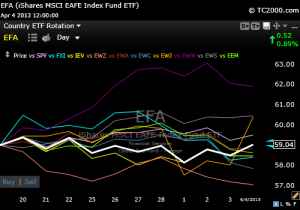 Real Estate Index (REITS) – IYR broke through the trading range near the high of $68.50-69.50. Sector Rotation Model Followed through on the upside, tested one day, and now on the upside again. The Sector is getting positive press on the creation of REITs to absorb the excess housing defaults from banks and Fannie Mae. The risk still has to be managed despite what anyone thinks day to day.