The recent volatility in the broad markets has been driven by geopolitical events. The volatility come from the fear investors feel relative to the unknown or uncertainty of the markets moving forward. The initial reaction to the events in the Ukraine, Israel and Iraq was to sell. Even with that mindset the selling has been muted versus the news. Thus as you can see in the chart below the S&P 500 index has formed what looks like a double bottom pattern of consolidation. The last two days it has attempted to push to new highs. The uptrend as you can see remains intact and the outlook for now remains on the positive side. Thus, the fear prompted by the activity in the news the last couple of weeks is now being pressured by the buyers wanting to take advantage of what is deems an opportunity to buy on the dip. 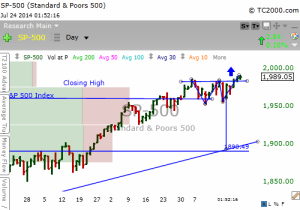 While I would like to argue the downside case and pontificate all the reasons we are heading for a correction, The charts just don’t support that type of argument. That leaves me with the fundamental side to argue on valuations. To that end I am sure I will be right eventually relative to valuations, but how much higher will the indexes rise in the process of me attempting to be right? If I have learned nothing else about the market, I have learned that the market could care less about your thoughts, opinions and beliefs. Thus, you learn to go with the trend and follow the course until it no longer exist or you can fight the trend. Longer term we are breaking higher on the broad indexes and the outlook is for the markets to move higher. If you believe this to be true it may be time to put money to work.

Biotech (XBI large cap or IBB mid & small cap) pushed through resistance on Wednesday and looks poised for more movment to the upside. A test of the move would offer a better entry point especially if it test the support levels on the move. This sector would also offer momentum to the balance of the market as it has been identified as one of the bubble sectors. Watch to see how it unfolds moving forward and then use it as a barometer for the market overall and adding to positions.

Social media (SOCL) has experienced some selling pressure/anxiety from the bubble talk as well. The reversal off support at the $18.50 ish level has changed some attitudes, at least for now. The earnings news from Facebook silenced some critiques and put the upside back in play for now. This again is a positive sign for the broad markets as one of the sectors that has been deemed overvalued is justifying the price of the stocks. Use as another benchmark for where we are heading looking forward.

In much the same way Small Caps (IWM) have been under pressure from the sell side. The lack of belief in the growth side of the market started a couple of weeks ago and the rotation to value, bonds or dividend trades has been the push. This week the interest in the sector has shown some positive signs, but it needs to close above the $115.25 currently. Several attempts the last two days, but we will watch to see if the upside gains any momentum short term.

Transports (IYT) continue to validate the Dow Theory and move higher with the broad markets. This move should equate to a positive move in the industrial stocks (XLI) as well moving forward. This is yet another gauge to use to measure the strength of the underlying market versus what is in the headline.

The upside remains in play. We are willing to add to positions and manage our risk as we go along. Prudence is always important, but it is equally important to put fear aside if the charts don’t warrant the concerns going forward.