Why are we worried about Russia and Ukraine going to war potentially? The headlines this morning were spinning with news that Russia will start military drills along the Ukraine border. That sent the positive open falling quickly back to earth. The chart below is a five-minute chart of the NASDAQ index. As you see we opened at 4177 and 20 minutes into trading we were in negative territory for the day at 4122 or 55 points evaporated on the worries created relative to news about Russia. The index did manage to bounce after an hour of this reaction, or maybe, they asked the same question I did… Why worry about this? Is it a news event, economic event, political event or market impacting event? Right now… it is a news event! It could evolve into any of these, but until something happens it is a media/news circus and the speculation monkeys are swinging from the trees. 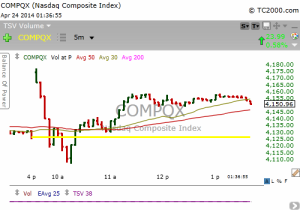 SPDR S&P Russia ETF (RBL) is down 2.6% on the news event, and as you can see on the chart below, it is keeping the ETF in a confirmed downtrend. Since Monday this has been on our Sectors-to-Watch list. First, we were looking for a positive resolution to the issue to create a buy signal. That reversed to the downside play building a case as Russia got more aggressive in their stance. RUSS is the Direxion 3x Short ETF for the country and is up 7.4% today on the “news” turning negative in terms of settlement versus war. If you look at the chart of RUSS you can see, if the issue escalates or the fear of war rises, the fund traded to a previous high of $26 on the same issue. Resistance is at $19… near the close today and could provide an entry point if the worry becomes reality. 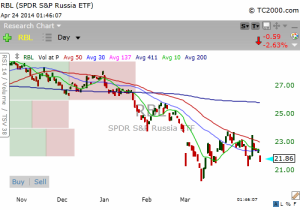 Again, what is the worry relative to the US market? Uncertainty for one, but the real concern is the US involvement and/or sanctions by the US and the rest of the world. That could have a ripple effect and thus the worrying has begun anew. Gold reacted on the upside to the event today as GLD started trading at $122.85 and then gapped to $125.10. War does have an impact on gold due to currency issues. That also helped balance out the discrepancy of the gold miners and the price of gold, except today the miners fell 1.2%. Emotions and news keeping the situation unclear and too much volatility for my taste. Treasury yields spiked higher as well, but quickly moved back to Wednesday’s levels. Oil rose despite the excess build up in the US. Wednesday’s inventory data showed the highest supply surplus since 1986, but crude was trading at $105? Yes, worry is bigger than fact when is comes to the markets and speculation reigns supreme.

My advice… keep it simple. Don’t worry and don’t chase things that are news driven. The chart above of RBL is pointing down and if the news or events confirm that direction the short trade in RUSS will present itself clearly as an opportunity. The trend in USO (crude oil) is up from the January low. If the news or speculation around the commodity is withdrawn and the price floats to a level based on demand, the trend will reverse and offer an opportunity to be short crude oil. The trend in US equities (S&P 500 index) is up and unless the issues in Russia drag the US into some type of involvement the trend is where we look. A reversal will be easily defined on the charts, but speculating about what might happen it… isn’t worth the discussion or worry. We can only trade what the market does, not what we think it might do.

Keep is simple, set your stops according to the risk you are willing to accept going forward, establish new positions based on trends and your objectives not the media, and most of all, be patient.