Dealing with a new reality or at least the perception of one. The Federal Reserve Presidents discussion relative to the Treasury and Mortgage bond purchases not working to stimulate economic or job growth set investors back. The fact they are looking at alternative options sent investors towards the nearest exits the last two days. Thus, if the new reality becomes no more money from the Fed, how will that impact stocks going forward. The first reaction will be shock and selling. Wednesday… Then it will be what happens with interest rates, housing, the consumer, and, and, and. The real issue is it creates uncertainty about the outlook short term. There is one primary thing investors want… clarity looking forward. Thus, if the uncertainty remains watch for volatility to continue to rise along with short term selling pressure.

Tomorrow ends the trading week and we are scanning and looking at the current developments and which make sense and which offer opportunities. Be patient and maintain your discipline.

The FOMC minutes hangover from Wednesday remained for investors. The attempted bounce early didn’t last and the broad indexes moved lower on the day with the NASDAQ taking the lead off 1.2%. As you can see from the data below, this week did little to improve the outlook for the economy. There are no reports tomorrow leaving the market to trade on it’s own merit. 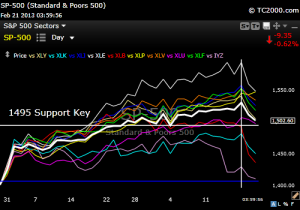 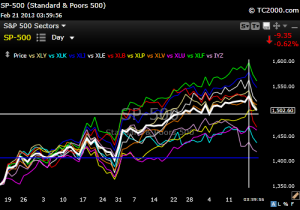 VIX Index: Spiking higher on the FOMC prompted selling and index moved to 16 intraday – ADDED VXX to S&P 500 model Wednesday. This is a negative indication going forward for the broad market index.

Financials – XLF tested back to support and we hit our stop on the position.

Japanese Yen – Has the yen found the near term low? FXY is testing support and bouncing currently. Watch to see if this develops into a possible trade on the yen. YCL Proshares Ultra Yen ETF

Treasury Bonds – The move in yields hit the exits for the short side play with TBT. The upside play with TLT is starting to be attractive short term for a defensive move.

High Yield Bonds – HYG = 6.55% yield. Support is at $92.75, which has held short term and the fund moving off the lows for now. We will watch to see if support holds and then make a determination.

BAL – Cotton jumped in mid January nearly 10%, but has stalled since. A trading range of $52.80-54.40 is in play. A break higher would be a continuation of the move off the November lows. One reason for the jump is rising demand from China? They are importing more than analyst expected and that provided the initial bump. Now we look to see if it a true increase going forward. Still testing the upside.

KOL – Breaking lower – short set up for those willing to take the risk.

GLD – Downside follow through on Friday with drop of more than 2% on the metal. This is the accelerated selling we discussed and we will monitor to see how low it will fall. Big follow through on Wednesday and the 2.5% decline puts the negative sentiment in control of the metal. GLL short trade working from the Research Table.

EFA – Dropped last week on Spain and is still testing as the euro-zone GDP data disappointed. The support levels are key and it is holding above the first level at $58.15. Broke support as the euro works against the global markets along with weak economic data. Watch for the next opportunity.

FXI – China’s news on spying and using attacks on US corporations in this country. The new impacted the Country ETF selling off 2.1%. The fund had already broke support at the $40.85 support of the trading range. The $39.30 support failed and the downside is in play short term.

EEM – Downtrend back in play on the break lower.

The pullback test is in play for IYR and $67.25 is support. If we break below that head for the exits.