Yes the uptrend is still in play, but based on the headlines you would think we were in the midst of a market correction. What gives? Simply put, four months of sideways, up and down markets with bouts of volatility. What is the challenge? Same as we have discussed since last fall… clarity. Or should I say lack of clarity in the markets overall. The economic picture, Federal Reserve, geopolitical issues, global weakness and earnings are all getting part of the blame, but it all circles back to clarity relative to capital growth. Left to themselves stocks will struggle for a definitive direction. News can push stocks higher for the micro term, but clarity is what builds long and lasting trends. The sellers continue to call for an end to the current trends and today was a good start for their wish to come true.

The economic data has been disappointing in terms of the first quarter. The second quarter isn’t looking much better and if anything shows flat to 2% growth going forward. From my view this remains the biggest concern facing investors and has handcuffed the growth sectors. The Fed continues to believe that growth is going to accelerate moving forward, and it is that belief that has kept the sellers at bay, but the further we move without the Fed acting on rates (validation of their belief in growth going forward.) the less the sellers buy into the rhetoric.

The dollar has experienced strong growth for nearly a year. The decline in late March through last week has reversed again with the dollar moving back towards the previous highs. The dollar index now stands at 96 and the previous high was at the 100 mark. The reversal back to the upside is impacting gold, oil and other commodities negatively. The negative correlation between a stronger dollar and commodities is playing out in the charts currently. Watching how this unfolds as well as the impact on the emerging markets. EEM is testing support near the $42 level with the renewed move higher in the dollar.

All of the broad market indexes closed down more than one percent on the day and that puts a negative sentiment in the air to start the trading week. The volatility index jumped back above the 14 level after testing near 12 the last two weeks. Negative sentiment can become a self-fulfilling prophecy and today was the start of the doom-and-gloom society attempting to get a foothold to push stocks lower. One day does not make a trend and we need to have patience towards letting this all unfold currently.

The chart below shows more than I can write about the last few months. The trendline off the October low has been broken, The trendlines off the December low is still in play along with the March low trendline and the 2080 mark as a key level of support. The relative strength index is still above 50 and the volume remains consistent. There is plenty of room for volatility and without some clarity in direction we may very well experience the ranges of volatility within the current support and resistance levels going forward. 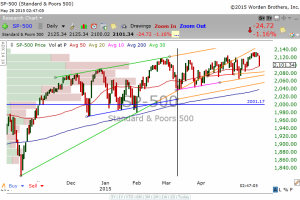 We will continue to take it one day at a time and we will manage our risk accordingly.