Markets start on the downside, but rally back to close positive on the day. The move was led by Telecom, Basic Materials, Utilities, Energy and Financials. Technology remained the biggest laggard on the day.  Google and IBM will announce after the close today and they will impact the outlook for tech and possibly the broader market.

Telecom got a boost from Verizon forecast of record subscribers increasing future revenue. However, they did miss earnings? That validated what we discussed about the forward guidance being more important than the current quarter. IYZ was up more than 1% on the day.

Google profits jump on surge in sales… stock is up nearly $30 or 4% after hours to $735. Revenue fell slightly short of expectations, but the reception to the news is initially higher.

The move in energy continued from last week as the major oil companies make moves higher. XLE was up 0.9% and  oil services were up more than 1.1%. Crude moved higher clearing the $96 level. Gasoline (UGA) cleared resistance at the $59.25 mark gaining 0.9% on the day. Heating oil (UHN) was up 0.8% and natural gas (UNG) was flat. The energy sector remains positive and pushing back towards the September highs.

Financials (XLF) gained 0.9% and moved above the $17.15 level. Banks (KBE) were up 0.8% and regional banks (KRE) gained more than 1%, both breaking above near term resistance   The sector has been a key player in the upside move for the S&P 500 index.

Plenty on the table as we begin a new week of trading. Earnings are focused on the large cap technology stocks all week. Wednesday Apple reports, and that is sure to draw plenty of attention! This promises to remain fun and enlightening.

The index is making it’s move towards the 1500 level slowly and methodically. We have to take what the market gives and for now that is a slow move to the upside. The economic data, earnings and investor sentiment are all in play short term, and thus far they have not done anything to disrupt the trend.

Filtering through the sectors of the S&P 500  index we find Financials (XLF) made a move above $17 level as the banks bounce back. Healthcare (XLV) broke to a new high closing above the $41.60 and has follow through moving higher.  Industrials (XLI) pushed back to a new high and followed through today. Basic Materials (XLB) closed at a new high,and produced the follow through on the upside Tuesday. Technology (XLK) moved back above the 200 day moving average, but is still worrisome short term with large cap earnings to come. Bottom line… uptrend remains in play and is working/melting higher.

The chart below has a starting point of 11/15 which was the pivot point for the current uptrend. Still moving sideways with a drift to the upside on the chart and still attempting to make a move towards the target of 1550 short term. The short term chart below (second chart) show the leadership off the lows on December 28th. 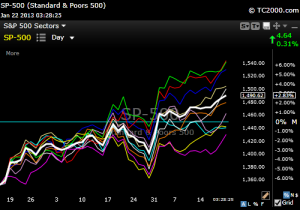 The chart below is the 28th of December starting point looking for current leadership on the renewed push higher. Energy established itself as one of the new leaders along with, Materials, Consumer Services, Industrials, and Healthcare. Financials made a move above resistance, Consumer Staples have kept pace with the index overall, and technology, utilities and telecom have been lagging of late. Utilities made a strong move on Tuesday to the upside as did Telecom. Still moving higher overall, but it is definitely a stock pickers market as the leaders push higher. 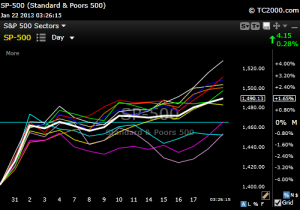 The VIX index moved up to 13.25 at the open, but closed at 12.5 on the close. No signs of anxiety yet and the overbought signs remain, but ineffective at this point. This is a time for being cautious not selling.

NASDAQ Index – The index cleared 3130 and made a positive move back near the highs. The move is holding above 3120 for now with the upside is in play. Apple is putting pressure on the index, but has settled for now. Be patient to see who this plays out short term. Large cap technology stocks could hold the answer for the major index this week… up or down.

Dow Jones 30 Index – 13,440 level on the upside was a positive. Move to a new high the last three trading days. DIA was worth a trade on the move above 13,440 short term. Monday produced a move above 13,640 as an additional entry point on DIA.

Small Caps jumped $87.50 on IWM to continue to lead the broad markets. And, Midcap Indexes showed equal moves above the $105 level on IJH. Monday both continued the moves higher and set the pace to start the week. Weigh out the risk factor of buying at these levels currently or continuing to hold existing positions.

Financials – XLF moved above $17 as banks led the way. The earnings numbers are being made out as bad relative to the settlement payments from the financial crisis. That said… they continue to make money. KBE tested lower, but has moved successfully back above the $25 level. KRE tested the $30 resistance level for the regional banks. Closed at $17.16.

Retail – this has been a mixed bag, but last week the Retail Sales Data for December was better than expected and the sector made a move higher from the consolidation range. XRT has pushed to the $65.60 resistance for now (new high). The scans from the sector last week turned up some stocks worth watching. PSUN, WAG, CVS, URBN, SVU, TSCO, ANF. We added the position in the ONLY ETF Model today. Watch XLY as well as it continues to move to the upside.

US Dollar – The dollar remains volatile on a daily basis. The buck retreated to support at $21.70 on UUP. The test lower was a negative for the upside short term, but still watching to see how it plays out and follows the move higher off the $21.70 support?

Euro – The euro was testing lower on the rally in the dollar, but that reversed on the dollar weakness and is now above the previous high. Let this play out on the upside. Could add to the position on the test of support at $131.50.

Japanese Yen – Has the yen found the near term low? FXY bounced off the $108.80 low. The question is will the bounce hold this time or continue lower? The devaluation is an attempt to stimulate exports for Japan. Watch the upside if Germany steps in a they have been rumored to due so to negate the Japanese advantage on the devaluation move.

Treasury Bonds – The yield on the 10 year held at 1.84% and the 30 year to 3.03%. The downside risk in Treasury bonds was in play, but they have regained their poise to bounce short term after holding $117.50 support on TLT. Still an upside opportunity in the bond short term. (SEE SECTOR WATCH LIST)

The volatility has calmed in the bond for now. Watch the uptrend line off the December low. Resistance remains in play on the yield near the 1.9% level short term.

High Yield Bonds – Testing the highs and resistance near $94 on HYG, with the upside continuing to melt higher for now. Look for support holding at $92.75. Continued to creep higher today.

Corporate Bonds – LQD, iShares Investment Corporate Bond ETF is struggling to hold support near the $120.40 level. The downtrend started in October and has not settled yet at support. This is worth watching as a short opportunity as well as an indication of the risk being added by investors to portfolios.

The commodity sector continues to be a challenge relative to direction short term. Still a shot in the dark on some, but others are starting to shift and trend higher. Traders sector for now.

UNG – Natural Gas broke support and moved lower on January 2nd. On 1/10 the inventory data showed a drop in supply and the bottom was established. The good news finally pushed the price higher? Winter demand remains mild, but the cold weather this week and forward forecast could push prices higher near term. The follow through above $19.20 again brings the buyers out. Nice follow through on Friday for entry. Patience is a must for the commodity. (SEE ONLY ETF MODEL)

OIL – Oil has been stuck in trading range, but moved above the top end of the range at $93.50. The political risk remains globally.  Still looking for clarity in trading relative to the price of crude, but for now the news is driving it higher. The upside is in play.

UGA – Gasoline tested support $56.80 held and has moved higher on the rise in crude. The break above $59.35 on Tuesday was a plus for the upside.

DBB – Base Metals broke support, tested $18.60 low and now is attempting to move to the upside. A move through the $19.25 level would be the key short term. Be patient and let this develop further.

Palladium (PALL) broke above the $69.50 high and heading higher. Platinum (PPLT) remain the better bet on the precious metal side. Platinum gapped higher and it is testing the upside.

WATCH: FXI – China has firmly established the uptrend off the November low. However, the volatility of the move has picked up on economic data from China. Watch as a consolidation pattern is building on the chart. Breaking above the pattern on Thursday and followed through on Friday on economic data? Watch to add to positions. ENTRY: $42 FXI

WATCH: Emerging market bonds (EMB) – Looking for support and an entry opportunity from the selling. Looking for a move above the $122.10 level for the entry.

WATCH: Emerging market Sovereign Debt (PCY) – Testing support near the $31 mark short term. Watch to see if this breaks lower or offers and entry on the bounce. Pays a 4.6% dividend as well.