Nice open reverses after first hour of trading and broad indexes continued lower on Monday. Yes, we are all blaming oil price dropping for the uncertainty in the broad markets and rightfully so for now. The speculation side of the equation is no one really knows what the overall fallout will be from the event. The longer that crude remains at lows the more impact it will have on the global economies especially those countries that are commodity export dependent for growth. Lower prices will have some positive impacts on the economies, but for now none of it is quantifiable or translatable to create measurable facts. Thus, speculation rules the day.

The thirty-year bond TLT (chart below) hit $126.04 and the yield on the bond resides at 2.74%… down from 3.1% on November 6th. Big move tells the uncertainty level in the markets currently. When investors are uncertain they head to safety and the chart reflects more of a sprint of late as TLT has gained 6.5% since the low on November 6th. This is also one of the top producing assets for the year. 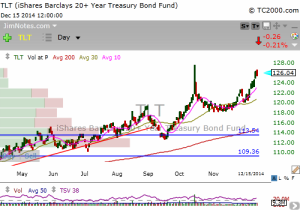 The NASDAQ closed down 47 points or 1.2% to start the week. Yes, volatility remains at work in the broad index. We have discussed the potential test to the 4611 level near term and we hit that on Monday closing at 4605. Semiconductors and small caps failed to hold up for the index and biotech dumped 2.7% on the day. We discussed the two inside trading days on Wednesday and Thursday of last week, the break lower Friday established the downside as the direction of choice currently with the confirmation on Monday. Volume jumped on the selling as well the last two days. 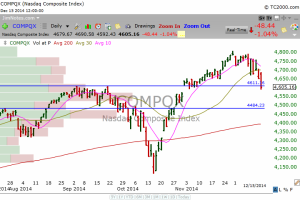 The S&P 500 index closed at 1989 and confirmed the downside break of the 2018 mark on Friday. Energy, basic materials, telecom and industrials are leading the downside, but financials, healthcare and technology are joining the forces on the downside. We closed below the 50 DMA confirming the sellers taking control currently. 1983 support in play, but the 1967 mark may be the next stop. 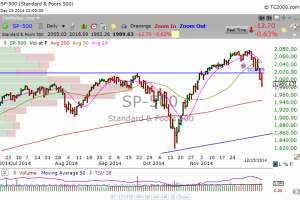 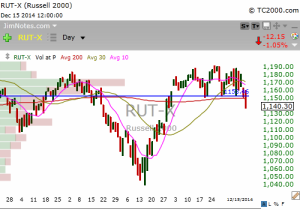 The Volatility index reversed off the lows at 11.5 on December 8th and pushed to an intraday high of 24.8 on Monday. This shows and validates the uncertainty in the markets currently. It is worthy of note on Monday that the index did not accelerate higher on the selling. It did have one interesting looking chart on the five minute chart however. Watching to see how this unfolds tomorrow along with the broad indexes above. The sellers have control, but be on guard relative to the year-end rally everyone is pontificating.