As the old saying goes, “it is easier to embrace hope than to face reality!” For now investors are embracing hope that the Fed will not rush to cut stimulus. Last Friday the new home sales data was disappointing to say the least with a drop of 13.2% in year-over-year sales. The home builders (ITB) declined more than 2% in reaction to the news. However, the bad news was taken as good news relative to keeping the Fed engaged in stimulus, and the markets rallied or bounced on the data. This weekend as I spent time digging in and looking at what is happening in the markets both 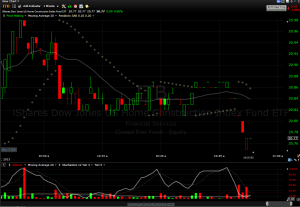 fundamentally and technically, I could see even clearer that investors were fully engaged in hope. Hope is one of the three primary emotions that drives stock prices. It tends to appear when the broad market is pulling back or experiencing selling. Investors like when market move in an upward trend as it has over the last nine months. The longer the uptrend the greater the hope that isn’t over yet. In other words we don’t want to face reality of what is really taking place either in the markets or stocks, that eroding confidence in prices are continuing to rise. That puts us squarely in a phase of hope versus reality.

On Monday more reality came in the form of the durable goods orders dropping 7.3% in July. The big ticket items and a drop in business order were the primary concern. Expectations were for a drop of 4.9% due to a decline in Boeing commercial jets, but as you see we exceeded the expectations on the downside. If you take out transportation the order number fell 0.6% in July. Orders for cars and trucks rose 0.5% showing demand is still solid currently. Core capital goods fell 3.3%. This is a good measure for business investment, but the outcome is disappointing for the month. The numbers are volatile and they will likely be revised going forward. Consumer staples were down 1.2% on the day as a result, and the downtrend has been reestablished in the sector. Next support is $39.64 for XLP.

Secretary of State, John Kerry discussed the issues in Syria rattling the markets in the late afternoon Monday. His statements that the U.S. would hold Syria accountable for chemical weapons rattled investors and the broad indexes reversed into negative territory. Investors really don’t need anything more to add to their plate of worries, but like it or not, the issue is on the table. The geopolitical issues in the Middle East have been quite, but this could spark some interest in oil. This is an issue to keep an eye on moving forward.

Gold has been on the rise after finding a low at 1200 on June 27th. The metal made a brief move above the $1400 level on Monday and has been in a methodical uptrend off the low. The 1420 level is resistance and a a level to watch on the upside move. That also equates to the target we set for gold on the break above the 1290 level. Is the move sustainable? That could be a question that is debated for longer than we have time. I would be very cautious at this level short term.The recent move off the $1280 level has been driven by investors not believing the Fed will cut stimulus. $137 is the target on GLD, but GDX, Market Vectors Gold Miners ETF is attempting to break above the next level of resistance at $30.40. A confirmation of the move higher lets the ETF potentially run to the 200 day moving average ($35.30) before any significant resistance.

Silver (SLV) is in a similar position with the break higher at $23.50. That puts $26 or the 200 day moving average in play at $25.50 on the upside. SIL broke from a pennant pattern on Friday to continue the upside. The miners are benefiting from the move higher in the metals short term. Definitely remains a positive story with some short term caution advised, but potential building for the upside to continue.

As the month of August winds down ending summer and the fall begins, the hope is for a better second half of the year economically to spur stocks higher. So far, the reality in the data is not supporting the improvement hoped for. While there is still time for things to improve the doubts are rising and the selling has been present. It is important that you take a dose of reality to go with your hope as we move forward. Set your stops at the levels you are willing to risk and manage the emotions of an ever changing market environment short term.

The broad indexes were set to move to another record high when Pfizer announced it would only be ab[...]

Markets started the day lower with some selling, but found their footing and closed slightly higher[...]