It would be fair to say that computer selling kicked in on some of the high beta stocks like Netflix in today’s early trading. Most bounced back, but Netflix closed near the low of the day. There was more signs of this activity with the media circus of Apple in the afternoon. Is it a warning sign or just some profit taking or speculation? That will be seen going forward, but today it got my attention as well as other traders I am sure.

Jobs report started the day with a lukewarm report of 148,000 new jobs for September versus the 185,000 expected. The unemployment rate fell to 7.2% (fuzzy math) and participation rate remained the same at 63.2%. The report was enough to keep everyone happy, but not so good to raise speculation on the stimulus cuts kicking in from the Fed.

The report sparked a rally in gold, up 1.9%. The dollar dropped to support again on the dollar index, and interest rates fell below near term support as bonds rallied. Thus, the report was enough to make stocks happy as well as the Fed hawks. To add some icing to the cake, crude oil fell 1.8% and back below the $98 level. That was our target on the break below $102.50. We are watching all of this for the opportunities if the sentiment continue to unfold in each of these sectors.

The S&P 500 index moved to a new high again today closing at 1754. The near term target is 1800 on the index and support is 1730 and 1690. I like the upside going forward assuming the earnings and economic data continue to hold up and provide a catalyst like they did today. Held the breakaway gap on the upside from Friday.

The NASDAQ hit a new high again at 3929, but stumbled early with the flash selling in Netflix and other high beta stocks. This all has my attention as the markets remain positioned for some selling or a test of the move off the October lows. The NASDAQ 100 index followed suit as the large cap stocks regain their upside leadership on earnings. Watching to see if this holds going forward, but for now it is helping our plays on the index. The leadership remains.

The Dow remains the laggard, but managed to post a solid gain on the day following some early selling that put the index in negative territory. Not a fan of the index as earnings remain mixed bag for the sector. I am willing to wait and see before committing any capital to the index.

The Small Cap stocks continue to provide solid leadership much like the NASDAQ. They did test slightly on the day and we will watch to see how it plays out moving forward.

The chart today goes to Netflix (NFLX) as the intraday movement is worthy of attention. The move higher as the open was due to the positive earnings reports on Monday after-hours. The guidance was positive, new subscribers was good, and the forward guidance was good. The opening prices was $387 and as you can see below the closing price was $322. The stock lost 9.1% on the day, but the intraday swing was 16.8% on the downside. Now that is volatility. This swing set the tone for other high beta stocks to swing lower as well. Computers are a beautiful thing in a normal market environment, but today was anything but normal. Watch and see how this unfolds going forward for Netflix as well as other stocks in the same boat short term. 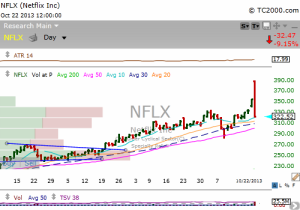 Apple was our stock of the day yesterday and it was making an attempt to follow through on the positive momentum heading into the release of the new iPads. It traded up to $528 and as low as $508 and following the press release and fanfare releasing the new iPad it tested $510 again. The upside still remain favorable, but a little less volatility would be nice.

Goldminers (GDX) were up 4.3% today on the heels of gold gaining 2% as stated above. The miners have been depressed in price and may have more to gain from a move higher in gold prices.

Basic Materials (XLB) was up 1.4% as the push in gold overlapped into the sector, with AA up 8%, FCX up 3.7% and NEM up 3.5%. Another sector worth attention on the upside should the move follow through tomorrow.

Utilities (XLU) move to $38.85 resistance completing a nice double bottom pattern. Watch to see if the sector follows through on the reaction to lower interest rates on Treasury bonds.

What to Watch Tomorrow:
More earnings on tap and we will see how much they move the value of stocks. We are still likely to see some selling at some point moving forward, but until it shows the impact we will have to go with the flow/trend. Set your stops and trade your plan. Don’t get caught up in the euphoria of the speculation as we saw today the downside happens quickly. There is a long way to go and plenty of argument left to take place.