Can we or should we be blaming Mr. Bernanke for the current pullback in stocks? As my parents always told me, if you hang around the wrong places and the wrong people something bad will happen and someone, not everyone, will get blamed. In Mr. Bernanke’s case he has not been hanging out with the right people, those who have a common interest in making the US and global economies better. As a result, things have gone bad and someone has to take the blame , he is the most logical choice… from everyone elses view, even the White House is pointing the proverbial finger.

There is plenty wrong in the world and I don’t think you can blame the Fed for everything. China has created it’s own problems with stimulus. The woes of the economy and now the banking system needing liquidity have led to more than a 10% pullback in stock prices. Those problems are not going away anytime soon, nor will it help the outlook for global growth. Europe has a dysfunctional union among nations whom don’t seem to understand how growth works or economics 101. Japan is throwing a hail Mary with the latest efforts to jumpstart their economy, and the emerging markets are falling on fear of all the issues we just mentioned.  While the $85 billion per month the Fed is buying in Treasury bond and agency obligations isn’t going to fix all of those issues, the move to withdraw the stimulus only adds wood to the fire of concerns.

The one primary benefactor so far of all the global issues has been the US dollar. A move above $22.43 would be a reasonable entry point for UUP to take advantage of the move higher. The gains of the dollar usually come with the fall of other currencies and one would be a short play on the euro (EUO) if it moves above $19.10. The volatility in Japan has created a short trade on the yen (YCS). With all the global volatility and challenges the dollar may be the best long term upside trade going forward.

Europe is not joining in on the downside momentum seen in both China and the Emerging Markets. Below is a chart of IEV, iShares S&P Europe 350 Index ETF, and you can see the dramatic selling over the last week. How much lower does the index drop before there is a bounce or rally in Europe? That is truly the million dollar question and not one easily answered as the hits just keep coming around the globe. Support at $38.40 held on Tuesday, but the downside is still in play. A bounce back towards the 200 day moving average is a possibility short term, but it may only serve as another point for sellers to add to their downside positions. EPV, ProShares UltraShort Europe ETF is attempting to break higher at the $24.68 level and is worth watching if the current trend continues. 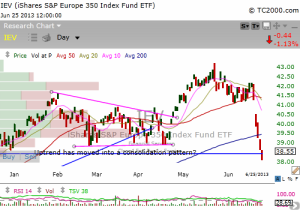 The sentiment has shifted over the last month and the markets are on edge about the withdrawal of stimulus in Japan, China and now the United States. Unless the economies of these countries accelerates to offset the speculation of the withdrawal the downside momentum may remain in play going forward. The goal is to take what the market gives, but investing on the downside is always a challenge mentally for investors. If it doesn’t fit your investment personality, cash is always an alternative when the markets start collectively heading lower. The goal of investing is to make money, not be right about the market direction short term or long. The downside is in play, protecting your assets is the priority.