For whatever reason that is the thought rambling around in my head all day… how do we make sense of all this noise in the market currently? I made a list of four things bugging investors from my view, and could impact the markets going forward, both short term and long term…

1)  The FED! the FOMC meeting will conclude tomorrow and all the chatter about the language changing and the removal of the “Patience” word in the text… Really? Is it really about the patience word? This is about when the Fed will start hiking interest rates, plain and simple. What the market wants is transparency on that issue and if it will be sooner rather than later. Will that take place tomorrow? Highly unlikely, but they will play the game of what they may do if this, and what they might not do if that. In other words it will be more confusing than taking an American literature class taught in Greek. What do we look for? First, interest rates on the ten and thirty-year bond. They are falling currently on the belief the Fed will delay any action on rates. IF… they do produce enough evidence in their comments written and spoken to convince investors they are going to start raise rates, bonds will correct and yields will rise. Second, until that happens all else is speculation and I am not up to discussing any of that. There are too many other things we can discuss. Chart below is TLT and it gives you a clear picture of where this story stands currently. 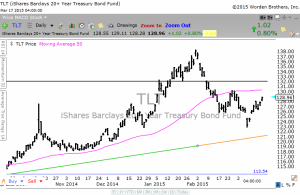 2)  The economy stupid. The 1992 presidential campaign was run on that theme and we need to start the same one now for both the Fed and those in Washington DC. The economic data since the first of the year has been weakening. Retail sales sequentially lower, ISM manufacturing sequentially lower, ISM services sequentially lower, home starts…. etc. the list goes on, but we are acting like life is grand in the US economic cycle. Jobs are the one fall back that everyone wants to measure and I am not going to argue the quality and quantity of quality jobs added versus service job or hourly and part-time work. REGULATIONS… are the blame… plain and simple. Too many regulation and demands placed on the work place relative to healthcare and taxes alone have stifled growth. That is my opinion and I will leave it at that. But, if things don’t improve on the growth side of the equation this will be the undoing of the current uptrend in stocks.

3)  The dollar. STOP the madness on the strong dollar is hurting the US economy. The multinationals are feeling the pinch in the global markets, but what about planning for what is on the horizon versus complaining about the strength of the currency of the country we live in. Looking at a chart of UUP or DXY you can see the climax run higher in the buck of late. I would expect some testing or a pullback short term, but it is likely the strength of the dollar will continue as Europe and the balance of the world provide stimulus to their economic systems… after all they learned if from the US which did the same thing from 2009 to October of 2014. A strong dollar isn’t a bad thing long term, it does cause some short term pain, but growth is the key if we are going to change the course economically of the US back to the growth of the 80’s and 90’s. Embrace the stronger dollar and look for small caps and start ups to gain an edge from a stronger dollar. 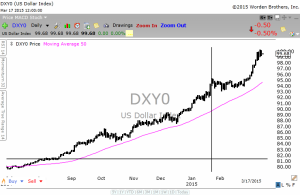 4)  Crude Oil prices declining to a new 52 week low at $43. This is another story that has been hard for investors to wrap their heads around. Less than a year ago oil was trading above the $100 mark… what changed? Technology for one, demand for another, and an unwillingness by OPEC and others to forfeit market share. Too much speculation on when the bottom will be in as well as who will be the ultimate winner in this price war globally. For me this has now become a trend issue. As long as the short to intermediate term trendlines are pointing down there is no real reason to be long crude oil as an investment, and equally buying the energy stocks would be a tough battle for making money. Not impossible, but not a battle that is tops on my list to fight. Let the bottom establish itself first, then look for the reality of a trend reversal going forward. At that point in time, and not before, you will find the opportunities in the energy sector to take advantage of going fforward. 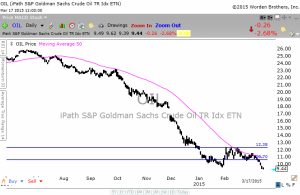 The challenge is clarity and conviction. Without them the markets flounder. The chop around tossed by the news event of the day or week. The speculation that is believable gets a reaction until investors realize they have been duped. The media has put all this in a pot, got out their big spoon and they keep stirring and stirring bringing the whole thing to a boil… just enough to not let it boil over, but keep the game going. Analyst are not better and investors fail to learn from the last time the same thing happened with a different topic. Step back, take a deep breath and let it go. Clarity will come and with it conviction about the future outlook for investments… until don’t be like the Fed… remain patient!