The headlines are full of warnings to investors about the current state of the economy, both domestic and global. The outlook for growth in Europe is -0.2% GDP, and the US is a whopping 1.7% GDP growth. Not the stuff great bull markets are made from. Nonetheless the indexes have continued to rise. The last six days of low-volume churning has invited new speculation relative to the current market environment.

Retail sales gave the market a boost prior to trading on Tuesday, but by the end of the day the market closed flat. There was a slight increase in the downside volume giving some a crack to talk about the sellers taking control of the market short term. Not conclusive from where I sit, but worthy of watching. The challenge for me was the retail data showing such a positive increase while the negative numbers for June were revised even lower? The non-adjusted retails sales data for July saw a decline of 0.9%. The government applies a seasonal adjustment to make the numbers less volatile. Not saying they applied an adjustment in the favor of things looking better than they are, but they did add a positive $1.9 billion number to get to the stated data. That was a first for the month of July in a very long time. The average over the last ten years has been to subtract $5.1 billion. Interesting accounting? Bottom line retail failed to hold on to the early gains closing basically flat on the day.

The volatility index has reach a point of lethargy and currently is at the level it obtained in March. As you can see on the chart below the test of the low on Monday hit the lows before a small bounce on Tuesday. The obvious statement and conclusion is the correction off the March highs in the S&P 500 index. If we are looking at charts alone we should be concerned about this comparison, but you also have to remember the catalyst for the rise in volatility and eventual correction that followed. Concerns over Spain and Greece defaulting or withdrawing from the European Union and the euro was in play. Today we have a low VIX, but no real news threatening or creating worry for investors. That said, stimulus anticipation is holding the market up, and if it doesn’t materialize soon we may see some worry creep back into the markets in short order. Thus, watch the indicator for signs of concerns if they should arise, but don’t sell just because the VIX hit the March lows. Be aware of your surroundings and alert to any sudden changes in the indicators. 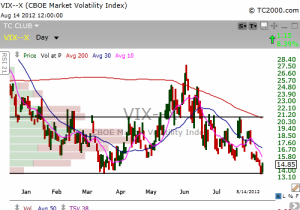 The S&P 500 index on the other hand is pushing against resistance at the 1405 mark, and failed to hold the move above that level on Tuesday.  Unfortunately the index has been in this position for the last six trading days which has now drawn the attention of traders and the media. That could create some undo volatility as a result of speculation more than reality. Watch as it unfolds. The lack of leadership within the index is the challenge short term. The technology sector has been leading the broad markets, but the large cap stocks within the S&P 500 have not been the primary leadership. Financials, Healthcare and the Consumer Services sectors have, but are now holding near their respective highs. They have not pushed through to lead the broader index higher, thus the consolidation. Plenty of interest in the index short term relative to direction, but be patient and watch for the resulting outcome up or down.

The low volume sluggish activity of the market invites more speculation from analyst and the media. For you and I we have to stick to what we know. Tighten our stops and let this play out. If we sit down and look at all the fundamental data versus what the market is currently doing… we would likely sell. If we look at the technical data we would hold our positions and tighten our stops. The later is the more logical move currently based on the current environment of hope and anticipation of stimulus from the central banks.

Watch the economic data today. I don’t expect anything market moving, but the CPI will give more insight into the inflation issues currently facing the consumer. Add in the elevated gasoline prices and the pinch is on. Remember the jobs report two weeks ago showed incomes are stagnant at best. Rising cost will and do have an impact on the spending power of consumer. The challenge is to manage the risk as it unfolds not to predict when and where it be.