The minutes from the last FOMC meeting came with plenty of anticipation today, and unfortunately, they did nothing to clarify the outlook for investors, at least that was my view. The big takeaway was the Fed suggested the labor market was improving more quickly than expected. I am not going to get into the stagnant wage issues or the drop in average earnings since 2007. That point by the way is supported by my favorite comment from the committee. “significant underutilization of labor resources.” of course the context was them agreeing that we are not employing people to their qualifications. Leaving that issue alone our focus in on what Wall Street will do with these comments. The first blush reaction today is positive for the economy and raising interest rates. Yields rose on treasury bonds and prices fell… modestly. The focus now will be on timing for rates to rise. That worry is what sent the broad indexes lower in July. I don’t expect a negative reaction to the minutes, but we still have to watch and see how it will unfold going forward. ?Tomorrow will give more insight.

With all that in mind a look at the treasury yields on the 30-year and 10-year bond would be in order. First below is the 30 year bond yield and you can see the move towards the 3.1% mark last week. The move higher this week was in anticipation of the FOMC minutes and they were not harmful (my view) to either direction. The first move was higher to the release and then they faded lower. This could now test the lows or drift sideways as the comments from the meeting did nothing to change anything short term. Relative to the long term bond we are still willing to flip a coin on direction based on the technical response to the minutes. Fundamentally, the downside will happen eventually and until the catalyst is produced to spark the selling, watch and this it unfold. 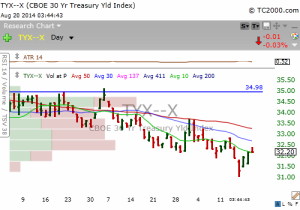 Below is the 10-year bond yield and the story is pretty much the same, but holding more of the bounce on the minutes release. There are still plenty of issues related to interest rates rising in earnest and we all have to be diligent in managing any positions we have effected by the move in interest rates. IEF, iShares 7-10 year treasury bond ETF dropped 0.3% on the day with the fund pushing towards the $104 support mark for the ETF. If you are looking at the short term view of the bond I would use a break below that point as a exit. If you are looking longer term, give room for the short term volatility that is likely to result from this news. PST, ProShares UltraShort 7-10 year Treasury bond ETF is the inverse of the yield chart below and thus is attempting to create a bottom reversal and move back towards the upside. For now the key is to be patient and let this gain clarity of direction before putting money to work in the funds. 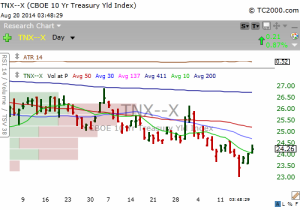 Another areas of interest today was crude oil. The close on Tuesday was $94.48 and broke support at the $95 level. This is a negative technical development for the commodity which would prompt us to look for a confirmation move on the downside today. We failed to confirm the move lower as the commodity bounced from the open and created an inside trading day on the chart. Part of the reversal is prompted from the inventory data showing a decline in inventory for the second week. This pushed the price of crude higher on the day and something to watch tomorrow. As you can see clearly on the chart the trend has been on the downside and it is anticipated to find support near the $95 mark. 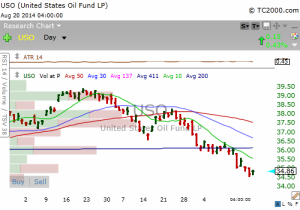 The energy sector (XLE) remains in a consolidation pattern. How crude plays out short term will have an impact on the outcome moving forward. Moving this to my watch list for the opportunities that will result as the story unfolds further.

The S&P 500 Index is moving towards establishing a new high and the NASDAQ is make progress towards the 2000 highs as well. Overbought? Just a term to investors at this point… take what the market gives and manage your risk.