News filled day leaves traders scattered and markets pushing higher despite the tug-o-war on direction early in the day. The FOMC meeting concluded with no major surprises from the Fed and the stimulus cuts remain with the Fed on pace to done by year end with the bond buying program know as QE. Yellen also stated the Fed was ready to start moving interest rates higher as a result of the belief the economy will be running much better relative growth in 2015.

Bank of England is warming to the idea of hiking interest rates before year end. This was part of the minutes released this morning from the June policy meeting. This was met with mixed reviews in Europe, but the stocks rallied as the US Fed keeps cutting stimulus.

Amazon is getting in the phone business… and everyone is applauding Bezo? Stock gained 3% on the news and hopeful outlook for the business extension. The best part of the announcement is the interaction of the phone and Amazon Prime and entertainment system. Worth watching to see how the stock reacts moving forward and more is disclosed.

AT&T gets the exclusive on the roll out of the new phone and the stocks was unchanged on the news. AT&T has bigger issues than a phone contract looking forward. Still one to keep on the watch list at the phone rolls out July 25th.

Defensive stocks were on the move to lead today and that left many scratching their collective heads if the Fed is out of the stimulus business and the economy is growing? No since in speculating we just have to watch how it all unfolds and what opportunities are created.

The chart below is a comparison chart of the largest holding in SPDR Financial ETF. We discuss the use of comparison charts in our webinars and use them in our research for a visual tool in sectors that are accelerating to find the leadership. The sector tested support Monday and has bounced with a move back near the June 9th high. Looking for the leaders on the chart shows MET and PRU (insurance) stocks leading the way higher. Recent moves in LNC, GS and MS are helping the upside as well. IF the rally is to continue the need for theses stocks to provide upside momentum is key. Watch and play what works on the move. 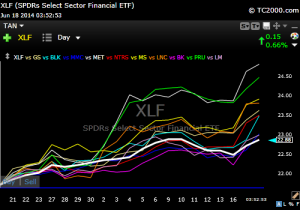 Gold miners (GDX) return to the upside on Wednesday. Gold was drifting higher on the day and the FOMC announcement pushed the metal back near the $123 resistance. Higher gold prices are better for the miners profits and the stocks jumped higher following the FOMC meeting. Broke above the $24.22 resistance and moving towards the $25.25 level up next. The sector has done well on the bottom reversal break to the upside. Breaking the downtrend line and the 200 DMA has also added to the validity of the move higher. 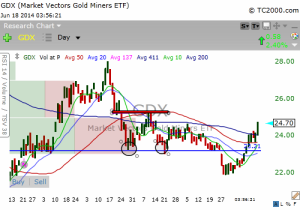 Utilities (XLU) tested lower in May, bounced to resistance and tested again in June and today broke through the resistance at the $43.50 mark. Double bottom pattern of consolidation and the FOMC meeting disclosing no rate hikes into 2015. That helped the dividend influenced sector. Big volume on the move and we will watch for the confirmation or follow through tomorrow and beyond. 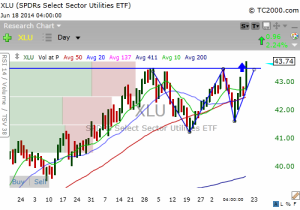 Choppy is still in play as it rotates among the sectors. Interest sensitive stocks got some releif from Ms. Yellen’s comments on not rate hikes seen until 2015. Reaction to news can be short lived and something to watch in tomorrows trading. We have to take what the market delivers short term and manage the risk of our longer term positions as well. Don’t let the short term volatility confuse the uptrend in play longer term. The long term trends are still in the upward direction and their is plenty of room between the current close and those trend lines on the downside. Manage your risk relative to your time frame and remain patient.