As we stated in our weekend notes… the buyers would have to decide if they are interested in the upside or was it just another round of short covering prior to the weekend? Monday’s trading looked more interested in the buy side than the sell side and the Volatility index fell and stocks rose in accordance with the money flow into the broad indexes. Volume was on the light side for the indexes and even the Dow plagued by selling in IBM showed lower volume on the day. Soft buying is never a good sign for the longer term outlook of a bounce, but we will take what trades make sense to our risk parameters. As we have been discussing for the last month, this is a news driven market and our approach will be one day at a time and no guessing or speculating on positions.

Tonight I wanted to post some charts relative to the move on the day and what looks of interest relative to the move. The first chart below is the S&P 500 index which managed to close above the 1900 level and is staring the 200 DMA in the face. Clear that level and a move to 1930 is next. We own the index long as a trade and we will manage the short term relative to our risk tolerance. Downtrend micro term is still in play and plenty of work to do to negative the trend. 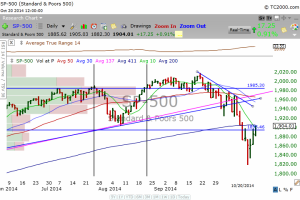 The second chart is the Russell 2000 Small Cap index. The bottom reversal is in play as well and this was the leaders last week. The stall on Friday left some concerns on the move higher, but it regained some upside momentum today. The 1097 resistance is directly overhead and a move through this level would be a short term positive for the move. IWM entry would be the $108.80 mark which we moved through today. Downtrend is still in play, but we broke through the accelerated downtrend off the September high. 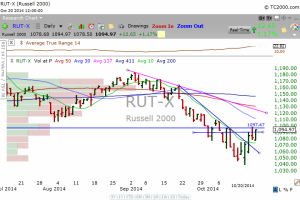 The third chart is the SOX semiconductor index. This was a previous leader as well and produced a gap lower as the selling in the broad markets accelerated lower. If the bounce for the broader indexes are going to sustain any momentum this index will play a key role for the move. We managed to clear the 580 level of resistance off the low and now the index needs to fill the gap left behind and that would take a move to 600 as well as recapturing the 200 DMA. Plenty of work to do in a sector that has been challenged by the outlook in the global markets economically. 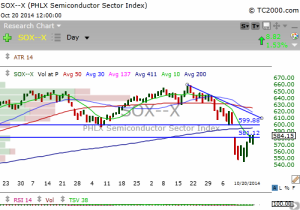 There are plenty of other charts to watch as this all unfolds. Healthcare (XLV) was one of the previous leaders as well and showed a positive move on Monday to the upside with a gain of 1.2%. Biotech (IBB) is an important part of the healthcare move as well and it has managed to bounce off the lows and back into the previous trading range of $264 – 278. Watch for a follow through if the sector is going to add any momentum to the healthcare overall. Energy dropped along with the price in crude oil. XLE has bounced off the lows and could produce some upside momentum as well. The refiners are leading the move, but it will take more in the oil services and conglomerates to keep the move accelerating.

Plenty to watch, others to trade and risk to manage in light of the current selling and now bounce off the lows. News is still the driver and that never makes for a smooth transition for the markets. Looking for the news to subside and a sustainable catalyst to emerge. To this point it has not been earnings… maybe the FOMC meeting will we be next motivator for the broad indexes.