At what point does the economic data matter? The ISM manufacturing data show contraction at 49% in May. The expectation was for 51% and still showing slow growth. This was the third straight month the number has declined and the worst number since November. Despite the negative data and a continuation of the selling that started on Friday, the markets closed higher. Why the intraday reversal and move higher for the broader indexes? Simply, the Federal Reserve’s magic money spell cast on the Market came into play again. There were comments from one Fed President in an interview which assured the markets there would be more stimulus, especially with numbers like the ones reported Monday. Thus, the fear of the Fed stemming stimulus last week was offset by the assurance the Fed would remain accommodative, with the primary difference… a bad ISM manufacturing report to back up the words from the Fed and make them believable. That shifted the sentiment midday and the markets drifted higher.

What does this mean for the broad market indexes going forward? More of the same essentially! Free money from the Fed which will find a way to where it is treated the best. That will likely be stocks again. The bigger question, does this new found belief in the Fed equate to the next leg higher in the current uptrend.

Fixed income is another battle being waged short term. Interest rates are getting a boost from investors as they believe things are improving globally and can absorb a rate increase. The Fed would like to maintain a low rate policy short term. As key yields on the 10 and 30 year bonds reach resistance points, the comments from the Fed on Monday may act to counterbalance yields from moving higher near term. A test in the price of the bond higher would be the next reaction. But, investors would have to believe the Fed will stick to the quantitative easing schedule of $85 billion for the foreseeable future. The stemming or withdrawal of stimulus has been the reason for the shift in sentiment over the last three weeks. This is a key point to watch moving forward.

The declining dollar is gaining downside momentum. UUP broke support at $22.60 on Monday and is heading towards a test of the $22.15 mark. The chart below is the dollar (bold white line) against other currency since the high on May 17th. It is easy to see the rise in the yen, euro, swiss franc and krona as the dollar confirms a downtrend short term. What has been a safe-haven trade is starting to break down. Global risk receding, at least in the media, that is transitioning the dollar which has been highly correlated this year to stocks. The ISM data on Monday was a negative for the dollar and that led to selling in the buck. The yen was a benefactor rising versus the dollar. This is another trend to watch moving forward. 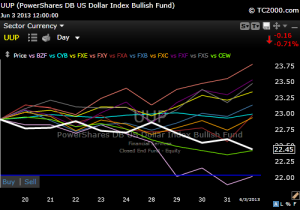 Oil has seen a modest impact from the decline of the dollar, but it will be a factor if the dollar continues to decline versus global currencies. The bigger impact has come from the slowing global demand for oil and the increased domestic production in the US. Thus, price of crude has stalled at the $93 to $97 trading range. Oil is priced relative to supply and demand, but the impact of a declining dollar will show up in the price of crude if the downside gains momentum. That would lead to a trade of being long oil and short the dollar.

Gold is responding to the economic shift as well. The metal is attempting to make a move back above the $1415 resistance level short term. Part of the catalyst of late is the Fed and the dollar. Both are adding upside opportunity to the metal. The renewed confidence in the Fed money dump has inflationary concerns for the economy and thus, offers upside to gold. The money dump also acts as a deflator to the dollar. If the global markets are improving as is being speculated, and the Fed is willing to continue to pour money into the economy, the dollar will devalue and move lower as confidence grows in the global markets. Again, that all sounds good in theory, but there are plenty of what ifs in that scenario. But, the speculation is pushing gold prices higher short term.

As stated above the story thread is shifting back to a stimulus driven market and a new stream of side effects in the various asset classes. The key is to stay alert and watch how this all unfolds. Take advantage of the resulting opportunities and keep looking forward.