The end result of the day was little changed. The headlines are more concerned with Romney’s comments on the 47%? Oh well, we are almost to the election and then we can get back to the traditional arguing about what bill to work on. Hopefully balancing the budget:)

Oil remains on the downside as the sharp reversal yesterday is still under investigation. Not sure we will hear the result of that, but the rumored release of the strategic reserves by the US is putting downside pressure on the price of oil. The demand picture has not changed and thus any rumor would put short term pressure on prices.

The major indexes are holding their own as investors digest the current outlook for the economy and earnings growth. There isn’t much happening in the way of change or forward thinking. Thus, we continue to watch, manage our risk and keep going forward one day at a time. No major changes on the day.

Below we review the moves in the sectors and the outlook.

S&P 500 Sectors-to-Watch – The index continues to hold above the 1420 level as the index looks for more direction. Investors stepped in despite the economic picture and trusted the Fed would do the right things to take the markets higher. Stimulus was the driver and now investors are looking for the next catalyst and they are hoping it will be to the upside. 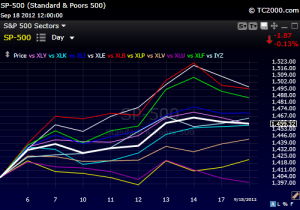 The leadership has flattened out this week… Watch the rotation if selling steps up:

Basic Materials – The sector has been testing the vertical run higher. Watch the downside risk as China has a arguement with Japan. Remember the move started based on the stimulus in China was a positive for the materials sector. Watch and look for the opportunities in XLB. Manage your stops for now.

Financials – The sector is testing the move higher looking for support at the $16 mark. The trend higher remains in play with the move accelerating. The FOMC meeting was the driver for the sector short term and with that out of the way we are in need of a catalyst. Banks and brokers have been leading the move higher, but they are testing as well. We hit the stop on KBE on Monday. Still looking at the upside for the sector longer term.

Energy –  Testing teh jump higher as oil takes a move to the downside on rumors. $73 is support on the downside and volume on the selling has been less than the buying. Watch for a opportunity in the pullback test. UGA hit a new high, but tested lower of late- tighten your stops on the play. Oil fell to $95.44 after breaking higher last week.

Telecom – The test of support resulted in a continuation of the uptrend for telcom. Hit a new high and is taking on leadership for the broad index. This remains a key sector for investors to take advantage of short term.

Healthcare – The sector continues to find buyers and pushes gradually higher. Moved above $39 and remains near recent highs.  IHF moved up nicely off the lows and hit new highs and is testing the move. XPH moved off the lows as well, and moved to new highs. IHI medical devices ETF hit new highs last week. Only question mark for the sector is earnings looking forward.

Biotech – The sector broke from the consolidation and was worth a trade on the upside play. The sector is helping drive the healthcare higher as well. Solid move to the upside and we have raised our stop to protect the gains. Break above $94 would be a positive for the sector.

Consumer Services – The consumer services sector has the retail stocks support relative to the trend higher. XLY and XRT have both moving higher short term with some testing of late. Digging in and looking for the leaders has been the best play. JC Penny’s broke above our entry point and continues higher with the sector overall. Take the upside, but protect against the downside short term.

Technology – The sector overall has performed well and continues to push higher. Watching the weakness in Semiconductors (see below). The networking (IGN), software (IGV) and internet (FDN) have all moved higher to support the rise in the overall sector. Watching FFIV, F5 Networks to break above resistance at $105.

Semiconductors – The sector has been testing lower and the downside leadership has been from Intel. The sector remains weaker, but is still consolidating and looking for direction. Watch the Intel play as it is attempting to bounce off the low. We adjusted the stop to protect the gain on the trade.

NASDAQ Index – The upside momentum has been as a result of the technology stocks, but the downside risk in in the semiconductor stocks. The trend is up for now, but manage your risk. Solid bounce back in the index.

Small Cap Russell 2000 Index – The upside move off the July 30th bottom struggled, but the move higher since has been a reflection of the belief in stimulus from the Fed. The key is to protect the gains we have and see how this plays out short term.

Volatility Index – The index is back near the lows at 14 and testing the sentiment from investors. The VIX as we stated did move as the rally continued. Still need to watch for unexpected  events moving forward. SVXY continues to move higher on the news.

Dollar – The dollar started lower on the FOMC rumors and the ECB stimulus is helping push the dollar lower as well. Throw in the Fed action on stimulus and the dollar is testing the lows from April. Looking for a small bounce off support and then a resumption of selling.

Treasury Bonds – The bond had reversed course on the stimulus from the Fed short term. Breaking support again at the $124.50 level as entry for the TBF short play. Watch the worries starting to rise in the global concerns. Set your stop and see how it plays short term. Could see a small adjustment to the yield short term, but the inflation factor is weighing in for now.

Crude Oil – The “speculation/rumor” of the release of the strategic reserves hurt the price today. Watch for the opportunity on how this plays out.  Manage risk of the play and mange your stops.

Gasoline – Can’t decide as it trades near the high… up or down? The upside is still in play, but watch oil prices on the rumors relative to the reserves being released. This is the test we were looking for, but more than expected. Watch and manage your stops.

5)  Global Markets: The global markets responded to the ECB stimulus, Germany’s approval of bonds, and the Fed QE3. The EAFE index tested support near term and bounced back near the March highs. Risk is on as the index gains relative to the US heading higher.

Brazil Small Cap – Bought on the move to the channel top at $37.50 with potential move higher. Solid move and follow through on the upside breakout prompted the entry at $37.60. Manage the trade and Raise Stop to $40 on move higher.

6)  Real Estate (REITS) – The sector moved to new highs, but has sold on the recent data. I like the outlook long term, and short term we expect volatility. Mortgage REITs (REM) bounced off the selling and headed back to a new high. Watching the short term selling with interest. The uptrend remains in play. Yield on the fund is above 10% currently.

7)  Global Fixed Income – The issues with sovereign debt in Europe keeps us out of the asset class currently. Emerging market bonds (EMB) tested lower and bounced off support to move higher. Passed on the opportunity due to risk/reward. International Corporate Bonds (PICB) and International High Yield Bonds (IHY) remain in a long term uptrend and moved higher on Friday. Hold positions and manage your downside risk.

How much negative influence will Spain have on the current uptrend in the European markets? The answer to that will depend on the time line and details released or how long it will take to cut a deal with the IMF. Watching for a opportunity short as this all unfolds.

China is moving on infrastructure stimulus. Watch FXI if it gets too extended and manage your stops. The fight developing with Japan is worth our attention as well. The violence over the weekend is just a small part of what this can erupt into.

Commodities should be the benefactor from the Fed stimulus activity. ETFs to watch relative to this move… 1) DBA, PowerShares Agriculture ETF – broke from consolidation on Friday on above average volume. {Sold off on Monday with the drop in CORN by 4%}  2)  MOO, Market Vectors Agribusiness ETF – broke higher at $51.10 as stocks in the sector jump on the news. Look for reasonable entry point. testing the $52.40 level or the downtrend line broken on Friday? Watch to see if it holds and give an opportunity for a upside trade.  3)  OIH – HOLDRs Oil Services ETF – Break above $41.80 is continuation of the uptrend. The rumored release of the strategic oil reserves.  4)  IYT, iShares Transportation ETF – The rails and shipping will be needed to transport the products internationally. Pipelines will benefit here as well. 5)  GSG, iShares Commodity Index ETF – broke above $34.85 to continue the uptrend already in play. The story in these ETFs will build if the stimulus plays out according to plan. Watch, build a strategy to capture the upside and always use stops to protect against the idea or belief not validating itself.

Attention will turn towards the election soon and certain sectors will start to react to whoever is leading. For now that is Obama and as we get closer to November investors will factor in specific policy events they believe will influence the markets. One to watch now is the tax hike on dividends. Long term it will be neutralized by the Fed keeping rates at zero, but shorter term it could create some opportunities. This is on my watch list looking forward.

QE3 was good for stocks to move higher on Thursday, but what about the future? Inflation is one concern reflected in the precious metals prices jumping higher, and what does this action really say about the economy for two. The latter is a bigger concern from my view going forward. The Fed is essentially stating the economy is in enough trouble we need to take more action towards fixing it. This is where we have to be aware that stocks may move higher now in response to the stimulus, but as the economic data is reported we have to prepared for a correction or pullback in prices.

What am I watching now:   1) MSFT – Broke above $31 and looking for entry point near the $31.25 mark.  2) Chipotle Mexican Grill gapped lower on earnings in July, but has recovered off the low. $340 resistance is in play and a move to fill the gap is what I am watching short term.  3)  The miners are running again as both the precious and base metals are moving higher. XME broke above $43.50 and ready to jump above $49. 4)  Utilities are building a base near support at $36.20 on XLU. Watch to see if we bounce back towards the highs. 5) TBT – Short Treasury play is attempting to break higher as yields fall. If the Fed acts on the stimulus it could be an issue. Watch for possible move higher short term. (Got the break higher on Wednesday as trade opportunity)  6) UNG and FCG are moving higher as natural gas continues to climb on inventory data. Watch for move back to $22.50.