The tale of two markets as the pivot lower on September 18th turns higher on October 15th. This has setup like another ‘V’ bottom for the broad market indexes. The last one came on July 24th – August 21st. Similar in time frame, but the test lower was only 4.5%. The test/correction for the current move was 10% nearly double the test in emotional fortitude for investors. The question is will we complete the reversal back to the previous highs? I don’t have a answer, but the process is well under way. The chart below shows the pivot point lower on September 18th and the reversal off the low October 15th to date. Will the right side of the chart become a mirror image of the left side? Through today the answer is yes with some subtle differences. 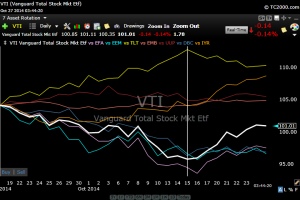 The one part that we should be prepared for if this is to develop as a mirror image, is the slowing of acceleration on the upside to match the deceleration on the downside move on the left side of the chart. Breaking them down we can see the dollar and the emerging market bonds have not changed their respective sideways move in respect to the benchmark of US stocks. Treasury bonds are declining at a slower pace than they rose on the concerns about the global economies and money rotating to safety. The slowing could be a result of the belief the Fed will not hike rates as early as planned in 2105. That has also been a benefactor to the REITs which you can see have been accelerating nicely since October 6th. Emerging markets and commodities have not responded in-kind on the upside move as they continue trade sideways with some appearance of wanting to head lower. The strong dollar and weaker global outlook will get the blame for that response of late. The EAFE index is following along with the US markets as they have a tendency to do without clear leadership globally.

The chart below shows the timeline moved forward using the low as the pivot point to current which shows the leadership of the broad asset classes. The US market shows the upside recovery from the lows with the REITs and EAFE index tagging along for the ride. Treasury bonds are the laggards and the balance are moving sideways. Finding the leadership is the key to finding investments with higher percentage of probability of moving higher. Thus, the process would be to define what is leading in the three primary leaders below. 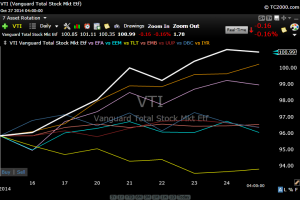 Thus, breaking down the US markets we would want to know what is driving the leadership from the same point of time. Healthcare and Industrial sectors are the two primary leaders with the basic materials and energy taking a break today on the move lower in oil prices. That shift could stir up some challenges for the US markets going forward and have our attention. If the upside is going to sustain itself we would like to see the consumer and financial sectors pick up some of the slack left by the energy move lower. In the coming days this will give some indication on what to expect from the markets overall as well as the parts.