The Federal Reserve is a mixed can of nuts… only thought that comes to mind as the headlines continue following the FOMC meeting last week. Bullard was quoted as saying he fears ‘violent’ reaction in the markets when the Fed finally hikes rates. I am not even sure how to respond to that without sounding like a hater! When you 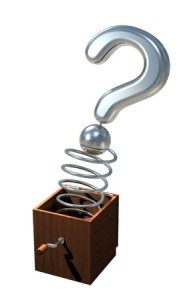 can’t make up your mind or guide the markets with some semblance of credibility what would you expect? The markets were preparing for a rate hike this summer, but then they did the Chuck Berry Twist relative to what indicator they would use to confirm they were ready to start hiking rates, and everything change in the blink of an eye. From my view, the Fed set itself up to be the one with their hands on the handle of the Jack-in-the-Box… turning it slowly with music playing and waiting for the big surprise of when the clown (Yellen & Company) jump out and surprise everyone. Yes, that will cause a ‘violent’ reaction. The market doesn’t like surprises and in this instance the Fed has no one to blame but themselves.

The last week there have been multiple headlines in which the article attempted to put a spin on when they believe the Fed will hike rates based on the new criteria for doing so. It is starting to sound a lot like the story of the little boy who cried wolf! When it is actually time to move rates no will believe it and it will create a surprise moment. The term quality of jobs was used by the Fed last week as a determining factor. Since then many views and pontification on what that stat is for the Fed… the most logical choice is the wages. If wages are rising it is a good sign the economy is growing and strengthening. Higher wages means workers will spend more and merchants would raise prices which would show up in the rate of inflation. This may well be the barometer used by the Fed Chair to advance rates higher from zero currently. If this is true then it would appear the Fed has drawn a line in the sand relative to when they would hike rates. Again, assuming this is true… the market could gain some clarity relative to the benchmark. This is still all conjecture and only time would tell and hopefully this creates some clarity for investors going forward.

Now that we have that rant out of the way, what happens from now until the Fed decides on the parameters to trigger a rate hike? The consensus view is the Fed does nothing until it can see the whites of the eye of inflation and wages are definitely a variable view from investors. The Volatility Index is at 13.4 and only 3 points from the low of last July. There is still plenty of room for volatility to shrink relative to anxiety. The worry factor is not priced in the market currently and there isn’t anything current that would shift the beliefs for now. That lends some credibility to Ballard’s comments on the markets reaction being ‘violent’, if the move were announced now… it would shock investors and the selling would commence. Thus, watch how the VIX index responds going forward.

The perception of a delayed hike by the Fed is weakening the dollar which is down 3.6% since the announcement.  The weaker dollar is impacting the price of gold which is up 4.2% and silver is up 9.4%. Crude oil has pushed higher as well with a gain of 6.5%. There is always going to be a ripple effect when you put the Fed in control. The speculation is driving, but the more the Fed talks the more confidence the markets will gain or it will create and build more nerves on uncertainty. For now the markets are pushing the confidence route.

The global markets are in play on this merry-go-round the Fed is running. Europe has rallied back to the February and November highs with the opportunity to break higher based on the outcome of their stimulus and the strength of the US economy. Emerging markets have rallied as well back to the same highs and need to break through this key resistance level. The dollar has a baring on how these countries will unfold going forward.

The bottom line is the Federal Reserve is writing a new story line relative to interest rates and the dollar. How this will play out in the coming weeks and months as we move towards the next FOMC meeting is the key to how the markets will move. The initial move is for  interest rates and the dollar is to move lower and commodities and stocks are moving higher.  In the meantime we face earnings putting in some comments on how the economy is doing. Q1 earnings could see an impact from the stronger dollar that may be worse than expected. One thing is for sure… it is not boring with all this speculation flying around. Manage your risk and keep your focus as this new story line unfolds.