Did you know the Federal Reserve plans to raise interest rates later this year? At least that is the rumor that has been circling Wall Street and the media since September 2014. Did you know the latest FOMC meeting concluded today at 2 pm? A glimpse at the intraday chart of the S&P 500 Index below shows you clearly what investors thought of the comments following the meeting from Chairwoman Yellen. 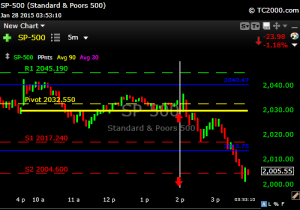 The Fed was upbeat in comments and showed no signs of wavering on the promise to hike rates later this year. Yes, that is the same threat that has been circling for the last five months. Despite the concerns relative to the December economic data and the fourth quarter growth in the economy, the Fed is ready to push interest rates off the zero mark. Of course I know you find it hard to believe that their are those who disagree with the Fed. There are plenty who want the free money to continue to flow into the markets and continue to benefit from the current structure that has pushed stocks through a five year bull market. The response when taken in perspective of what may happen going forward with interest rates is completely in line with the emotions of traders and investors… sell first, and ask questions later.

First a look at the volatility index… it was essentially flat all day… until 2 pm. I posted earlier today to watch the VIX index as an indicator for how the uncertainty in the markets would be interpreted going forward. The ETF VXX which trades the move the volatility index broke through the $32.30 level I stated as a negative and closed at $34.67 or a jump of 7.3%. That was nice trade for the day. Investors obviously are not as convinced the outlook is quite so promising as the Fed interprets it. That is why the chart above shows their reaction as one of selling. The chart below shows the impact of uncertainty on investors and the index. The VIX closed at 20.2 after closing Monday at 15.5. 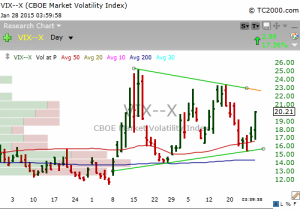 Second, earnings, global economics and now the Fed have erased the 3% gain off the lows. The next challenge facing investors is the support at 1992 on the S&P 500 index. The NASDAQ faces the 4560 mark again and the Russell 2000 Small Cap index may test the 1155 mark yet again. That is the same index many, me included, have been singing the praises of the last week. It is amazing what a little news, events and fundamental speculation turned reality will cause educated investors to do!

Third, the 10-year treasury bond moved back to the previous high and the yield fell to 1.72% and just shy of the low from two weeks ago. What is this saying exactly about the Fed following through with rate hikes? If the Fed moves rates higher the yield on the 10-year bond will rise as well pushing prices lower, but that isn’t how the bond reacted today. Investors are essentially stating they don’t believe the Fed will follow through on this promise… or are they? The euro declined today against the dollar and that pushed money in the direction of US. The global markets pushed lower in response to the Fed as well pushing money… towards bonds. Emerging markets fell more than 1% and that pushed money towards bonds. Don’t confuse the influx of money into bonds with the Fed actions exclusively. There are global issues acting on the money flow into bonds and in some ways off setting the move or talk of the move by the Fed. This is yet another area to watch moving forward… how does the bond respond if and when the rates are pushed up by the Fed. Only time will tell and stops are must if you own treasury bonds.

Last and certainly not least on a busy day for investors… crude oil dropped 4% to $44.36. After climbing on some optimism on Tuesday the supply numbers in the US were not favorable to the price of crude. Supply rose 8.9 million barrels, but distillates dropped 3.9 million barrels. Gasoline was expected to rise 830,000 barrels, but actually fell 580,000… 1.4 million less than expected? Good news for gasoline? Yes, it was flat on the day versus the big drop in oil. The base in UGA is worth watching as well. Refineries are operating at 88% capacity and the export of gasoline is helping keep things flowing. A look at the refining stocks shows the positives in VLO, TSO, PSX and WNR. All of that aside, the price of crude is still having an impact on stocks in a broad sense. Throw in the FOMC meeting today and it got ugly quickly on two big negatives as seen by investors.

1992 is in play as key support for the S&P 500 index. Break and it can go lower quickly. Manage your risk and remember that cash is a sector to protect you from storm that may be building. If we remain in the range the pressure will only mount for a decision. The six week consolidation is making more people antsy about a drop and optimistic about a rise… that is the shift in sentiment facing the markets short term. Take it one day at a time and be patient how you approach this choppy environment.