Nerves break on the FOMC decision, but then rallies into the close as if nothing changed. Well that is actually the case relative to what the Fed decided on interest rates, stimulus and their outlook on the economy. Everything is status qua and just keeps moving forward. The key take away is that there is no inflation which gives the Fed room to continue to provide stimulus without much worry. Employment is slowing and that give the Fed reason to continue to justify the money dump. Housing is slowing relative to interest rates and that keeps the Fed engaged in the process of stimulating the economy and keeping rates low. All the same things that have been being addressed in this recovery for the last four years. Business as usual.

The economic data was mostly in line with expectations. ADP employment report showed 130,000 private sector jobs versus the 150,000 expected. CPI was up 0.2% and in line with expectations and the Fed confirmed what everyone has been saying… More free money to stimulate Wall Street. The next big report will be on Friday as we get the ISM manufacturing data for October. That will show the impact of the shutdown and the fourth quarter progress relative to growth? Plenty of economic data still to come.

After-hours earnings were focused on Facebook (FB). Of course they didn’t disappoint and showed very positive results with mobile remaining the bright spot. Ad revenue from mobile is now 49% of total advertising sales. That can be a double edged sword for a company as well. Should help tomorrow as investor sleep on the Fed comments.

Starbucks (SBUX) announced earnings as well last night with another strong quarter. Margins grew more than 2% and earnings beat by 4 cents on higher revenue. The result was the stock falling 3.3% in after-hours trading? Go figure! Watch to see how it unfolds in the AM.

The S&P 500 index test following the FOMC meeting closing at 1763.  Our near term target remains at 1800 on the index and support is 1730 and 1690. Not convinced today changed anything other than some anxiety over the Fed meeting and statements. Earnings and economic data remain the key short term for the index relative to direction and it has been positive enough to keep the index in an uptrend. The downside risk is a possibility near term and if investors turn and run it could get ugly quickly. Watch the test lower response tomorrow.

The NASDAQ declined following a new high to close at 3930 or 0.5% loss on the day. LinkedIn put pressure on the stocks after falling nearly 10% on earnings report. The NASDAQ 100 weighting to Apple is greater and it bounced back following up on a negative move on Tuesday. Adjust your stops on any QQQ positions accordingly.

The Dow has been playing catch-up to the balance of the markets and hit intraday the previous highs at 15,700. However, thanks to the FOMC meeting the index closed lower at 15,618. The double bottom pattern setup for the index is still a possibility going forward. A break higher would be an entry signal to add to positions as a trade. Worth watching for a positive upside play if it breaks higher.

The Small Cap stocks showed some weakness on Wednesday dropping 1.4% and testing lower. Watch for support around the 1100 level going forward on the index. Watching for some leadership if we are going to continue higher short term to return to the small caps.

The chart today is Facebook (FB) again… Our last post discussed the decline from the newly minted highs on October 18th as it broke key support at $51. The worries about earnings continue to nip at the heels of the stock all week and then tonight they announced better than expected results pushing the stock up 15% in after-hours trading. As you can see on the chart below the current price put Facebook at another new high. As a prudent move we did add some puts to protect the position in the event of bad news, but it looks as if things are just fine for now. Watch to see how this follows through in trading going forward and if the stock holds the gains. 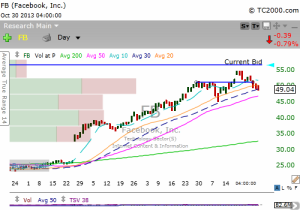 Gold Miners (GDX) The intraday charts shows the negative reaction to the Fed comments. The drop of nearly 4% was mostly recovered in a “V” bottom intraday. Gold has been attempting to make a move to the upside of late and that is helping the mining stocks follow suit. One to watch in trading tomorrow.

China (FXI) – the country ETF has been attempting to bounce back from the negative press relative to China’s banking structure and economic worries. The last three days of talking and convincing the markets that everything is fine created a bottom reversal opportunity. Watch to see if the fund can hold the 50 DMA in tomorrow trading.

3D Systems (DDD) – the stock tested lower in early October, but has been a solid run higher the lats three weeks. This is a disruptive technology that is gaining acceptance and offers a bright future relative to market share and earnings. New high posted today and one to watch going forward.

What to Watch Tomorrow:
Reaction to LinkedIn and other earnings today. There will be Facebook after hours and of course more economic data to go with the earnings news. ADP employment report, CPI and the FOMC meeting conclusion to make everyone’s day. Remember, be discipline, set your stops and manage your risk in the current market environment.