Why ask Why was the question we asked on Monday, but Tuesday would prompt the same question relative to the comments from Mr. Fischer. He stated the Fed may need to raise rates sooner, rather than later, if the economic picture improves with growth ramping up. Why would he make this comment? Why ask why? The stupidity of the pontification was beyond my understanding, and thus, doesn’t warrant addressing relative to reason, only impact.

The impact was a drop of more than 1% on the NASDAQ intraday. The markets had made solid progress on the upside as the buying in the large cap technology stocks continued this morning. But, the comments immediately spooked investors and the selling started and didn’t subside until two hours later. The index did manage to bounce off the lows of the day, but by then the damage was done. Thus, another day of news derailing any momentum or trend building in either direction.

As I covered in the update for the EGG scans tonight, there is no clear reason to attempt to trade or maneuver this market, unless you like choppy directionless trading. Day traders are have a blast… really? I think not the signals created by news are even make that task difficult. Sometimes the best trade is no trade and to remember that cash is a sector. Holding assets through this up and down gyration hasn’t been easy to do either. The consistent inability to define a catalyst or a direction for the market… is the only consistent currently. Thus, we have to step back, let all this pass, and then find the best opportunities.

The Russell 2000 small cap index is what we looked at on Monday to show the bounce off the recent lows. Today shows the reversal of the bounce and the test back near the previous lows. Visually this chart depict what we have been discussing… look at the  trade higher following the April 11th low, only to retreat and test that low again on April 28th. The entire trip lower from the reversal off the February high the index has done the same thing… run lower, test, bounce higher and then start the cycle over again. The index has fallen 10% and continues to test the support level near the 1085 mark. I would like to say a break lower will open the downside trades, but that failed last week when it broke lower and bounced. Patience is the best course of action as it all works out. 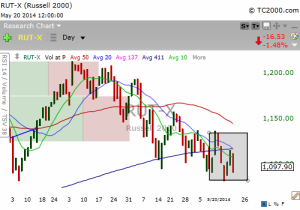 We posted the chart of the homebuilders Wednesday showing the downtrend in play from the March high. The homebuilders index released on Thursday didn’t help the cause on the upside, but it did stick with our evaluation of the downside being in play. Tested below support at $30.50 level of support and held, but the damage is done as the sellers believe they can press the downside.  Plenty of pressure on the stocks relative to cost of materials and availability of land. The downside is in play, but holding support at the $30.50 still… see how it plays out.

Japan – EWJ remains in trading range… from post last week
NASDAQ 100 – QQQ moved to top of the consolidation pattern Monday… break above $88.50 gets interesting. Attempted to make that move on Tuesday, but failed to hold it… still watching to see if it can find the upside momentum.

The markets remain uncertain in direction as we have discussed for the last nine weeks. The growth sectors are trying to bounce along with the dividend stocks, but they still have too much uncertainty hanging overhead. Bonds have stalled for now as fear has been withdrawn on worries the sky is falling. The near term shows little in terms of clarity from either side. No one wants to get caught on the wrong side, and that has muted volume. Stay focused and remember that cash is a sector and sometimes the best trade relative to market risk.