Crude supply continues to rise despite the headlines contrary to fact. The talk over the last month as been focused on the cuts made by US firms relative to oil production. The assumption is that would start to show up in the supply data. Based on the last four weeks of supply increases I am going out on a limb and say there is a problem with the earlier assumptions. The US is only third largest oil producing nation in the world. Thus, Saudi Arabia and Russia may not have gotten the analyst memo on supplies dropping. If your economy is oil based and dependent… would you cut production or increase it? I am only speculating a normal course of action by countries that don’t operate under the same guidelines. In fact, I would go so far as to say that the countries own and run the oil production companies in those countries versus the US being independent and profit motivated. It is important to remember there are always more sides to a story than the one in the headlines or the ones analyst want to promote in the headlines.

The Energy Information Administration (EIA) reported that inventories rose 7.7 million barrels last week hitting a record 425.6 million barrels. That is double the number expected from the report. The American Petroleum Institute (API) reported surplus of 14.3 million barrels. Investors tend to lean towards the government data (EIA) versus the industry trade group report. Until this data shows balance with consumption it will continue to put pressure on crude oil prices. The price moved below the $50 mark early in the day, but held above that level throughout the trading day.

The other factor pushing oil prices around for investors is the rig counts that are released each Friday. The expectations are for another decline in the number tomorrow. If that is true we may see another positive move in crude to offset the negative impact of the supply data. As if this sector isn’t confusing enough with all the moving parts and speculation we need to now focus on rig counts? This is how volatility is fed… plain and simple, take all the data points, or the ones you need to use, and attempt to sway the sentiment of the sector towards your underlying belief.

The ripple effect is to the energy sector (XLE) which decline below the $80.50 level in early trading, but has manage to move back above the key support. Welcome to the world of uncertainty that is getting kicked around like a soccer ball on every news bite and speculation to hit the headlines. The wild swings in prices has calmed, but the uncertainty remains.

The story in the sector continues to unfold. The challenge is weathering the volatility and news if you want to take a longer term view of the sector and own allocation in the sector. If you don’t like the ups and downs that come with volatility this is not a sector you want to have your money exposed to until the noise dies down and some clarity is gained.

Below are three charts to watch as this opportunity unfolds and for you and I as investors: 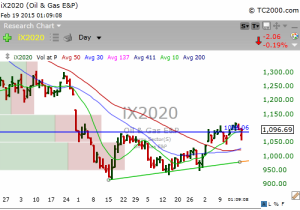 The first, is the chart of oil and gas exploration index. The index is attempting to break through resistance and continue the uptrend started off the December low. The key will be the issues addressed above… with a special emphasis on the rig counts and the impact to earnings of the underlying stocks. 1280 is the target if the upside confirmation can gain traction. 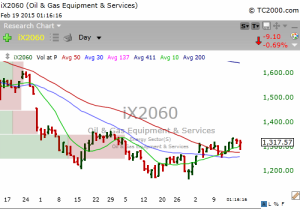 The second, equipment and services index. The bounce has been comparable, but it has not been able to break through the next level of resistance on the reversal attempt. I would classify this as still consolidating or bottoming technically. The proof will be in the next quarter of earnings from the sector in relationship to the price of crude oil. A move above 1374 on the index would make this much more interesting on the upside opportunity. 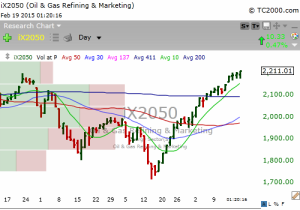 The third, refining and marketing index. As you can see this is clearly the leader for the overall energy sector as the bounce off the low in January has now eclipsed the highs from November. The strength of the index has come on the ability for refiners to hold their margins despite the cost of crude and the companies are exporting gasoline as well. 2290 is the next resistance on the index and nothing stands in the way of progress technically.

Opportunity is always based on your perspective! Technically the charts are setting up to potentially break higher. Fundamentally the sector is one big question mark relative to the impact of the price destruction on earnings. Cost cutting is in play, but the proof will be in the numbers. Define your strategy and watch how it will play out going forward.