The end of another month… next week we get the details from the economy. Based on what we have seen thus far from earnings, consumer sentiment, retail data and the FOMC meeting there is plenty to ponder and consider. I am not expecting great things from the ISM manufacturing data nor the services data. Jobs will be more of the same low rate of unemployment according the government figures, but they ignore the fact we have roughly 40% of working age citizens who don’t have a job… that is approximately 96 million people. Many of those that are employed are under-employed and making lower wages. Not to belabor (no pun intended) this point, but here in lies the issue for growth. It explains the weakest economic recovery following a recession since the great depression. 2.3% average GDP growth (even with the revised government way of counting) it’s awful… from my view. That all aside, analyst will be looking at the numbers and investors will weigh in with their result respectively. It should be a fun filled week for all.

Friday was an interesting market day overall. Below is a intraday chart of the NASDAQ Composite index and it shows clearly the ups and downs of the day with the index finishing the day basically flat. No fanfare, no excitement, just dull day overall. The small caps did post an early gain of more than one percent, but managed to only hold on to about a third of it by the close. 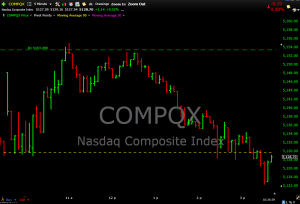 Biotech bounced one percent. Utilities added another one percent gain to follow through on the break above resistance. Telecom jumped 1.7% on the day. Healthcare added 0.5% and energy fell 2.2% on earnings from XOM, PSX, COP and CVX… all disappointed and the gains from the week were erased.

The big news flash/speculation point of the day was the drop in employment cost. That brought out the speculation that wage inflation was not an issue for the Fed to consider and thus, they would be under no pressure to hike interest rates in September! Beautiful, bonds prices jumped as yields decline six basis points on the ten-year bond. The dollar fell on the speculation, that hit oil prices, gold rallied and  banks fell. The domino effect of the reversal in thinking after the FOMC meeting on Wednesday. You have to love how one data point in time changes all that the Fed has done over the last three FOMC meetings telling everyone higher rates are coming. We won’t know the truth until the September FOMC meeting and between now and then… speculation rules supreme.

We will discuss all of this and more in the Research Outlook Notes for next week. Be sure to open them and use them prior to the open on Monday to get more input on our thoughts about the opportunities in front of us. After all… you can not invest in a rear view mirror, you can only go forward… never back.

Have a great weekend!