Market opens higher on mergers, IPOs, earnings, and any other positive it could point to. The seller coincidentally were pointing to the same issues as a reason to take money out of the market. Thus, the chop we have been discussing is not over despite the move on the upside today. In fact, the Volatility index move above 13 on the day showing the lack of calm in the markets.

Telecom (IYZ) took the top spot on the sector list today with a gain of 3.2%. Windstream announced it was interested in spinning off all its assets into a REIT structure and then leasing them back. This would be done essentially for tax benefits, I mean to free up trapped values of the underlying assets. It will take time to get regulatory approval and thus, will likely create more volatility for the sector going forward. With that volatility is likely to be opportunities to trade the sector as well.

Technology became a concern last week when the semiconductors started breaking down on weakness in the semiconductors. They followed through on the test of the low Monday, but the move was not overly convincing at this point. They are still being challenged relative to the technical data, but we have to watch how they respond the balance of the week.

Homebuilders (ITB) are down 9% this month and the pending home sales Monday didn’t do the sector any favors as they test support at $27.75. Not looking good from my perspective and the weak data isn’t doing any favors. Watch for a bounce and then more selling to follow.

Small Caps (IWM) attempted to put a bounce move together today, but that failed to a make a substantial move in the sector. First course of action is to move back above the $114 mark and hold support at $112.20.

Yields on the thirty-year treasury bond continues to fall hitting 3.22% today and moving below the 3.24% support. Money continues to rotate to quality and avoid risk of all the markets. Either bonds are telling something others don’t see or this is a temporary event, the trend down in yields has been in place since the first of July.

Twitter is all the buzz after-hours as earnings will be released. The consensus is on the negative side as they believe the company will continue to struggle to grow revenue and users. The bounce off the lows near $30 in May has kept the upside in play, but the consolidation pattern in play the last three weeks has been in anticipation of earnings. The impact will be to the social media (SOCL) sector and technology both of which have seen a nice bounce the last week.

There is plenty of noise in the media, the analyst, the daily market moves and just about every other measure. This is a time to practice patience. Buying the dips has been working, but like all good things they eventually end. Let the move validate if upside is to continue, take what the market gives and if the downside gains momentum be willing to step in as well.

Below we look at what was leading today, what we are still watching for leadership, and the developing losers or short opportunities. The chop is still in play and that makes the short term trading opportunities tough to measure and hold. Use a disciplined strategy or cash remains a positive sector.

Telecom (IYZ) jumped 3.2% on the news that Windstream (WIN) was going to spin off assets into a REIT structure and the company would then lease back the use of those assets. This would help tax wise and shareholders would realize a suppressed valuation in the stock. Thus, other companies in the space jumped on the idea they would benefit from this structure as well. Not going to happen overnight and thus, take the gains while you have them. Interesting opportunity in the sector going forward.

Biotech was back again with a move of 2.8%. Still working off the recent lows and I still like the upside going forward. Choppy, but still worth watching as a leader. IBB was up only 1% as the small cap stocks continue to struggle.

Dividend stocks (FDL) On Monday we saw rotation to utilities. Tuesday to telecom… thus, the space is building some momentum in the rotation. Watch for a confirmed break higher form the trading range.

Korea (EWY) breaks from trading range with solid gain on the day. Watch for confirmation of the move and more strength in the global markets. Hong Kong (EWH) follows through on the break to new high.

Short Russia (RUSS) leader today on the upside, but Russia remains a negative to the global markets.

Treasury bonds (TMF) continue to drift higher as money continues to rotate in that direction.

Miners (XME) has been stuck in trading range, but managed solid move higher on Tuesday. The move in DBB is helping this sector some, but still no big impact on miners as the disbelief in the outlook for metals remains on the weak side.

Real Estate (DRN) rebounds from Friday’s selling and the uptrend remains in play for now.

Utilities (XLU) gained 1.5% on Monday with some rotation to dividends and safety. Gave up some gains on Tuesday, but still looking for the upside to gain momentum.

Gold miners were higher on Friday and Monday. Still in consolidation pattern, but watching to see if there is any follow through going forward. There is plenty of work to do in the sector.

Treasury bonds continue to have defensive momentum to them from money rotating to safety.

Coffee (JO) is moving off the lows and I like the upside opportunity in the commodity on the speculation around the rising cost based on supply and demand.

China (FXI or YINN) was back on the leader board Monday and we continue to hold the EGG. There is speculation about believing China’s data points, but that has been the easy excuse to not believe in the upside produced in the stocks. The upside move through next resistance level at $40.25. January 2013 high is the next resistance point ($40.95). Still holding the upside broke from the consolidation pattern on the weekly chart on Friday’s close. Still leading the emerging markets and Asia.

Emerging Markets (EDC or EEM) – we got the break higher last week in the sector and we held the move this time around with a nice move on higher. The BRICS banks is helping the sector gain confidence. BKF broke higher as well.

Social Media (SOCL) cup and handle pattern with the 200 DMA offering the resistance point for the pattern to breakout. Watch as this sector remains a positive short term.

Base metals (DBB) still gaining in the uptrend. Hold and managing stops.

Short Crude Oil (SCO) was up on the day as well. The downside in crude continues to build some intermediate term interest. The demand has not materialized to the level some were expecting, but it has increased. Some downside will flush out the excess speculation and then give the commodity some direction.

Natural Gas (UNG) still testing support near the $20.75 level and if a bounce starts that could set up a trade opportunity. KOLD or DGAZ is the short ETF. GASL is the leveraged long ETF.

Small Caps (IWM) tested the $112.20 support and held, but still not looking healthy as the selling remains a concern for the overall outlook. TZA is short ETF. A close above $114 would be of interest.

Euro has been dropping on speculation surrounding Russian sanctions. Another downside move in the euro on Tuesday keeps the downtrend alive. EUO is the trade if this accelerates.

Semiconductors (SMH or SOXL) Tested the 50 DMA on Monday held and bounced with modest follow through on Tuesday. The miss in earnings has carried some weight to end last weeks trading lower. Watch how this plays out as it is a key sector to the markets health. Short trades are still the trade of choice with a confirmed bottom reversal.

NASDAQ 100 index (QQQ) tested the $96 level of support and I am watching how the large cap index responds. This has been the overall leadership for the markets on the last move higher, but is showing signs of topping technically.

Russia (RUSS) continues to find selling points as the issue with Ukraine continues. The sanctions are adding to the selling this week and the next resistance point is $14 on the short ETF.

We posted China (FXI) as the EGG potential trade last week. It gapped higher, tested, but held the move higher. With the test we added the trade and held. Some chop on Friday, but followed through on the upside on Monday. The momentum or rotation has been global stocks and we will take the gains if they continue. I still like this trade and we will manage our position and our risk accordingly. The move higher has gained nearly 7% on the move thus far. $40.23 target was hit and are raising the stop to $40.95 going into the trading day Wednesday. The chart below shows the break above the downtrend line and the December highs which will pose some resistance short term. 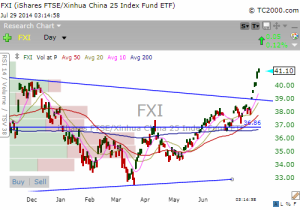