The last month of the year begins and it started with economic data. The key data point on Monday was the ISM Manufacturing which was not pretty! 49.5% well below the 50.7% expected which pushes it back into the contraction zone below 50. This is the fourth time out of the last six months the data has shown contraction in the manufacturing sector. New orders fell to 50.3%, production actually rose to 53.7% from 52.4%, and employment dropped to 48.4% from 52.1%. This was negative data and erased the opening move higher in the indexes. The week will be full of reports such as this and employment. This was not a good start to the week of data we had hoped for.

Hurricane Sandy is sure to get the blame for most of the negative results, but the tone will be set, good or bad, by the outcome this week. Yes, there is the fiscal cliff issues all over the headlines that will have more day to day emotional influence as both sides jockey to do nothing, or at best as little as possible.

Crude oil remains on our watch list short term relative to the consolidation and an attempt to move higher. On Monday USO pushed above the $22.75 level, but failed to hold the move. What will be the catalyst for oil to trade higher? The simple answer is demand, but we have to factor in speculation as well. The current outlook is for flat to declining demand based on the current global economic picture. However, the speculation side believes things are improving in Europe? I don’t want to argue the fact, but I am still not seeing that as a true statement. Regardless, the upside pressure is there and that presents the opportunity to trade crude short term. Equally gasoline is pushing higher short term. $57.80 is the next hurdle for UGA to climb in the current uptrend off the October low.

The S&P 500 index opened at 1423, but closed at 1409 following the ISM data. The index remains in position to move higher and the sentiment trade is in play. What I mean by that is simply that the fundamentals don’t support the trade higher, thus sentiment is driving the index. Investors want to buy stocks for whatever rational they deem appropriate, and it is pushing the price of the index higher short term. Technically speaking the best play is follow the trend until which time reality settles in and the sellers take over in earnest. 1430 is the level of resistance we are watching near term for the index. If we hit that level or 1420 either one, and test lower, look for the entry off the test. If we just continue higher hold your positions and let them run. This is a traders environment and one that you have to be cautious and manage the risk aggressively. It is important to have a defined trading plan and follow the plan.

Scanning the ten sectors of the S&P 500 index we find a similar look to what we covered in the weekend update on Friday. Two negative moves are worthy of note on Monday. First, the basic materials dropped 1.8 percent on the day, and back near the 200 day moving average. The news in the US economic picture sent the sector lower. It has been one of the leaders off the November 15th low and is still worth our attention, but let the support be established before taking any new positions. Second, Industrials, Utilities, and Energy reversed to lead the downside. Nothing definitive, but worth watching for opportunities. The chart below shows the leadership of the S&P 500 index since hitting the low on the 15th. 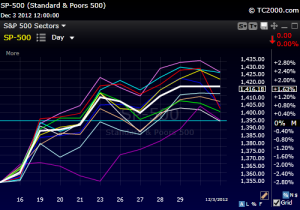 The reversal is still in play, but the volatility of the move to this point hasn’t been for the weak of heart. The uptrend is establish on the V-bottom and we continue to look for the test of the move, and then a continuation on the upside. We will keep our watch list updated with the opportunities as they unfold.