The European Central Bank surprised investors with a rate cut and a QE type stimulus for buying bonds. They are going the same route the US did several years ago to jump start a struggling economy. The challenge is determining the true impact and help it provided the economy versus the stock market. The debate will rage on for years to come, regardless it provided a upside catalyst on the day. Albeit the question from me on the day is in reference to sustainability of the upside move without some type of test, pullback or correction? I know that any answer to that question is pure speculation on my behalf, but it is a question we have to ask and look for validation relative to any answer we may ponder.

Putting the market in perspective is never an easy task for me as an analyst, technician or investor. Why? It is clear and beautiful when looking back at the charts and data to make sense of what has taken place, but when you start to project forward what course the indexes may take, it become pure speculation. This is why I find it vital to have rules for projecting and validating your beliefs. You are never going to be right all the time regardless of what story our minds create. Thus, we have to have rules for implementing the trades/investments. Defining how to get into the investment, what is the destination of the investment as well as what to do when we arrive at our destination, and where the emergency exits are in the event we need to evacuate. Following your disciplined rules and guidelines are vital to long term success in the investment game.

Taking these thoughts I want to look at some sectors that are in transition or worth our attention going forward. The first is the one we looked at on Tuesday, GLD. The technical view is consolidation and lack of direction for the metal in a short term (3-9 months) downtrend. GLD price broke below the 200 day moving average (DMA) again on Tuesday and broke support at the $123 level. That confirmed the downtrend and the negative bias short term for the metal. Thus, DGZ remains a hold as a short trade on the downtrend still in play. The gold miners (GDX) are moving lower as well in response to the selling. The chart below is GLD and you can see the move we discussed above. The next support is $119.45 and then $114.40. The move lower today only adds to the belief gold is heading lower. Remember, let this unfold, manage your position in accordance with the original objective in mind. If and when the trend violates your belief your exit points should be near by. Gold remains in a short term downtrend as we are tracking it below and if you step back and look at a weekly chart we are in a 14 month consolidation wedge/triangle which was created off the downtrend from the prior high in October 2012… thus, the long term bias is negative for the metal. 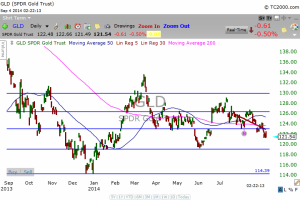 The second is crude oil (USO) which has become a yo-yo the last week. The commodity has been selling since June 20th and thus has established a micro downtrend that is testing $34.70 as support. The price has moved below the 200 DMA and continues to show a negative bias. As we stated in our notes last night the sellers have control and the buyers are only willing to speculate on news. The rumored peace agreement with Russia and Ukraine sent the price of crude up more than 2% Tuesday, but day it gave back nearly 1%. Follow the bouncing headline should be the description for the commodity. As we stated above… let the volatility play out along with the speculative news and you will then find a direction in the commodity that you can trade. Until then let the talking heads get it out of their system.

Other areas of response today to the ECB news are the euro (FXE) which declined 1.5% on the announcement of further stimulus. The euro continued to decline and remains in a short term downtrend or should I say cliff falling. The angle of decent has been accelerating with each speculative turn relative o the stimulus from the ECB. That was validated today with the announcement and thus now I would look for the support near the $126.35 level on FXE to step in and hold. 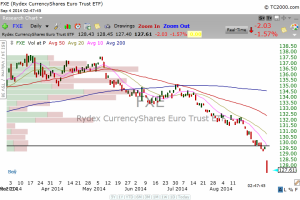 Natural gas (UNG) fell back to support at $20.65. A break lower would be a continuation of the previous downtrend. This is another commodity suffering at the hands of speculation. I would throw in one issue for consideration, what if Russian sanction against Europe escalate to the point they cut off natural gas supplies? Now that is speculation, but it is worth a thought of what if. For now I am content to hold KOLD and see if the support level holds are not and plan my position management based on the outcome. If more things develop we will add them to the equation and determine if we should remain short or take the profits and move on. 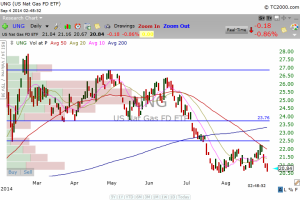 It is important to find what is working and in this case, not working when reviewing the markets. Opportunities are always present either short or long, short term or long term, high risk or low risk, we just have to have a strategy and plan for how to measure each and make investments based on our predefined strategy.