I have been reading articles about the price of gold being propped up and that it should be trading much lower.  Well maybe those writing the article were right. However, unless they were short gold to gain monetarily it was a great prediction and nothing more. Our short play on gold obviously did well on the day, in fact, it has done well period. The question now is how much farther can it fall. Raise the stops on GLL and let’s find out without attempting to guess.

The commodities remain the weakness factor in the media, but the economic data has been bad for March and it didn’t improve today. The homebuilders and the Empire State index both missed their mark adding to the string of misses over the last month. Eventually investors will believe the weakness and that is only going to ignite the downside further. That puts on the defensive as we go forward. I am looking for the exits and we will take it one day at a time for now.

Tomorrow the big question will be can the market bounce or does it sell further? Stay focused and let this unfold.

This was a day where the early trading was a gap open lower, but held for the most part and kind of worked its way through the news on China versus Citigroup’s earnings. Then the drift lower accelerated and by the end of the day it got ugly. After many days where the buyers step in and erase the early losses, today the selling just kept going and volume accelerated with the selling. The key will be how investors respond tomorrow. There were trendlines broken today along with other technical damage that we will be sifting through further tonight. For now protect your positions and let this play out.

The Empire State Index was well below expectations and posting yet another missed data point. The Homebuilders Index fell to 42 versus the 46 expected adding to the missed numbers. Homebuilders have been selling of late and today’s market along with the news took the index down 4.8%. If you still own the sector, watch the downside risk building in the sector.

For all of those who have been worried about the downside risk of the market overall, welcome to the dance. I know it is too soon to draw any conclusions from today’s activity, but the move did establish a new high or pivot point on the chart. As you can see below we have marked the April 11th high as the point to watch going forward.

Energy and basic materials both lead the downside of more than 5%, industrials off 3%, with technology and financials each giving up 2.5%. Watch how this unfolds, the leadership on the downside is in alignment with the commodities on the downside, but if financials and tech continue to push lower it may start a downside trend or pullback short term.

Volatility index – Volatility returned with a jump to 17.2 in the VIX index on Monday. Is this just a short term reaction similar to the one in February or December? Remember those were brought on by outside market events… today’s was a direct result of inside market events… economic data, commodity demand, China’s slowing economic data, etc. These events tend to last and ramp up versus getting a short term reaction of worry from investors. Jury is still out on the move, but for now we will treat it as a serious issue on the downside. 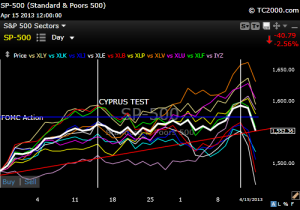 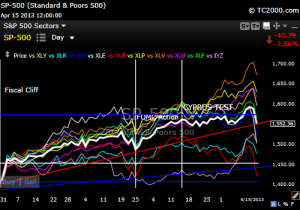 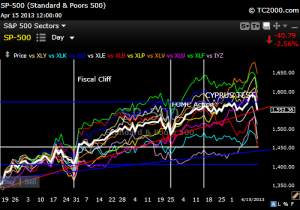 4/15 post – Selling accelerated in response to the broad markets. Citigroup did it’s part to give the sector a boost from better than expected earnings. There will be plenty more this week, but the threat of the downside is in play. We erased last week’s gains today and now look for some clarity in direction. Stop is $18 on XLF… watch the open on how to treat the trade.

Transports – (4/15 post) – IYT sold off tested support and bounced. Resumed selling on Monday and is now below the trendline. You have to transport goods to sell them… thus leading indicator. Not looking to own near term, but more as an indicator of direction short term.

Energy – (4/12 post) – Crude oil falls on demand expectations from the IEA and OPEC. Thus, the sector drops 1.7% Friday as a result of the news. I am still of the opinion that the improved outlook for production in the US will benefit the sector as well as the pipeline business for transporting the commodities. We will look at the best course of action to take relative to hedging and protecting the positions as we find the best opportunities.

4/15 post – Day from hell for the sector as it drops more than 4% on the day. I will stick with the comments above, but I don’t want to own the sector currently. Watching for a better opportunity going forward. Hit stop today on the position.

4/15 post – Watch the stop and let it play out short term. Evidence of the fact that defensive sectors still go down when the market moves down.

Small Cap – (4/15 post) – IJR tested lower and rallied back near the previous highs. However, the weakness in the sector remains a concern. Watching more for a leading indicator than investing.

4/15 – it is leading the downside. This was a weak link over the last month.

Midcap – (4/12 post) – IJH is in better shape than the small cap sector. Watching to hold near the current highs and then move higher short term. This is another position we will look at holding longer term and deal with the volatility as it arises.

4/15 post – did better than small cap, but not by much… still showing markets weakness towards the growth sectors.

4/15 post – held up better than most as a current leader. Watch to see how it unfolds, maintain your stop going forward.

Treasury Bonds – Yields on the 30 year Treasury is back to 2.88% as the pressure on stocks fueled the rally in bonds. Economic data, some need for safety, you state the reason, but the great rotation from bonds has not occurred  At each sign of trouble money tends to flow back into the sector versus out. Expect more volatility in the price of the bonds a the worries and the optimist duke it out.

High Yield Bonds – HYG = 6.5% yield. Support remains at $92.75. fell from the previous highs near the $95 level. Manage the position for the dividend as the growth side is uncertain short term. I expect the trading range to remain near term. Use $92.75 as the stop. OR TBF to hedge your position when volatility picks up on the downside. 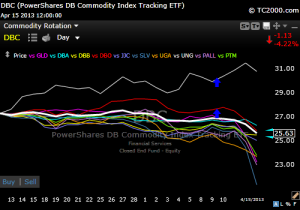 Global markets drop on slower economic data in China, Europe and the US. They tested lower on the news in Europe and Ching keep the markets in check. Monday reversed the upside momentum and now we have to watch how the downside unfolds short term. One day at a time. 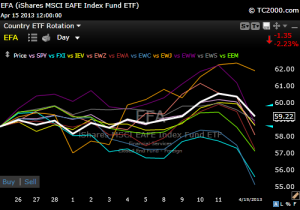 Real Estate Index (REITS) – IYR broke through the trading range near the high of $68.50-69.50 and continues to climb to new highs. Down 2.5% on Monday takes some hype out of the sector. Watch your stops and take the exit if the selling progresses.