On Thursday the markets drove higher on the dollar getting weaker… at least that is what the talking heads told us. On Friday the market sold off on oil dropping 4% and a study released by the International Energy Agency. At least that is what the talking heads told us… along with a drop in consumer confidence. By the way the buck was up more than if fell yesterday, why are they blaming it today? Headline of convenience to get eyes and ears to tune in. I would like to be one of the analyst/investors that goes on record stating the dollars impact on stocks is only through the emotional blathering by those who didn’t study economics or who need to boost rating on their website, radio station or television show. A simple review of the highest peak for the dollar showed one of the greatest growth periods in economic history in the US. Yes, multi-national companies get hurt relative to foreign trade that is a given. Maybe they need to learn how to hedge currency during volatile periods or find ways to produce and sell more at home using the strength of the dollar to help lower prices. Small caps and start ups thrive as they can use the strong dollar to their advantage to compete domestically. I am not going to belabor this point as we all know their is more to economics than the multi-national companies that are busy kissing the rear-ends of those in Washington. Great economic growth is driven by small caps and start ups not the big companies. They tend to be more of a drain than a growth factor. Enough said!

In other headline news… The closing low for crude oil on January 28th was $44.08. Today, March 13th it closed at $45.12. That put the price exactly $1.04 away from a  new closing low. The recent closing high was $53.53. First, the trading range was clearly defined. Second, all the hype about the low being established is turning out to be just that… hype. I have addressed this several times in our updates that the volatility is creating too much uncertainty in the price of crude oil, and in turn, that makes the risk to high to trade oil. This begs the question: Why am I getting so many emails about buying either crude oil or energy stock? Yes, they are oversold. Yes, the price of oil is likely to go up… someday. Yes, it looks like a bargain. BUT, there is no clarity, there is too much volatility and the news events are too unpredictable. Just today, the IEA (International Energy Agency) stated in a report that the stability in the price of oil is tenuous. That sent crude down more than 4% on the day. That is what I define as unpredictable news. It is not profound by any stretch, but the unpredictability of that being released this morning is what drove oil prices lower on the day. If you are short oil today you love the IEA report and if you are long you think they are a bunch of brainless people with nothing better to do than pick on your portfolio. The emotional rollercoaster is not worth riding to own this sector… neither the commodity nor the stocks make sense to me relative to the uncertainty of the risk associated with owning either one. Enough said!

On Thursday night I posted a video addressing some of the concerns about the move higher on Thursday. This morning I mentioned today being Friday the 13th and I hoped Freddie Kruger would stay home. Apparently he didn’t get the memo. One issue with trading on Thursday was volume on the buy side. Today the volume on the sell side was higher again. The sellers are more willing to commit than the buyers and that remains an issue for any bounce currently. The uncertainty is showing up in the Volatility index again and thus the advantage to the sellers. 2040 on the S&P 500 index is again in play as the downside support. It remains below the 50 DMA and the short term trendline resides at this level as well. A break lower and confirmation keeps the downside in play going forward. 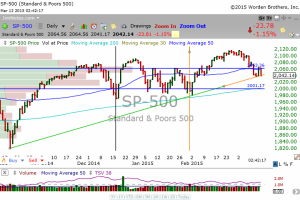 This weekend we will address this in detail and post the changes to the new spreadsheet. The trading notes will be up on Sunday as well to address what sectors are of interest from both a short and long perspective. Enjoy your weekend.