The broad indexes turned in a positive day overall as investors continue to put money to work. Buyers are willing to add as we break above the highs from September. This is all positive for now, but the markets are acting extended short term. Manage your stops as this continues to play out.

There were new reports out today on the worst flu season in more than ten years. The virus has now been labeled aggressive. I for one can confirm it is much worse than anything I have experienced. This is expected to continue and impact medical supplies. Not to be crass about this, but it may give a boost to the stocks in the sector.

Tomorrow starts earnings in the bank sector as Wells Fargo kicks things off. There is concern about the slowing in refinancing activity and that may impact the numbers from WFC. The stock closed higher at $35.40 and broke above the short term resistance at $35.05. Declining margins and slowing growth is what this boils down to and the numbers will give plenty of insight into the sector overall.

Still plenty of issues facing the market daily. Take it on day at a time and manage the risk.

The index made a solid move to 1472 on the close and remains near the recent highs. So much for a test lower, at least for now. Filtering through the sectors of the index today we find Financials (XLF) cleared the $17 level on the upside to lead the sectors. Healthcare (XLV) broke to new high closing above the $41.78 level. Industrials (XLI) gained 0.5% on the day to push back to a new high. Basic Materials (XLB) closed at a new high. Technology (XLK) held above support at the 200 day moving average. Telecom gained 0.9% to recover from Tuesday’s selling. The balance are treading water near term.

The chart below has a starting point of 11/15 which was the pivot point for the uptrend. Still moving sideways with an upside bias on the week and looking for the leadership on the upside to continue. 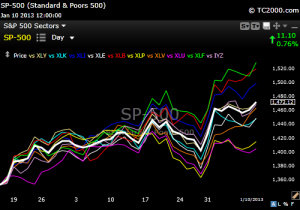 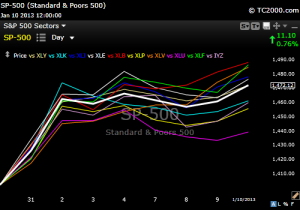 NASDAQ Index – The index bounced back close to 3110 last week and has continued to hang tough. Watch the large cap technology stocks for clues to the short term direction. We need to clear resistance at the 3110 (did today with close at 3121.). The test is on hold for now with the upside in play.

Dow Jones 30 Index – 13,440 is the level to clear on the upside (cleared today). 13,200 support may come into play short term. Watch for confirmation of the move higher.

Financials – XLF was one of the stronger sectors during the selling and has moved to a new high at $17.15 on Thursday. A test back towards $16.50 would give better entry point, but we have to go with the trend. Downgrade to BAC Wednesday put downside pressure on the sector, but it bounced back today gain 1.3%. Watch to see how it plays out short term.

Dollar – The dollar made a bounce off the lows as the Fed minutes gave reason to believe that QE funding would stop. today however the buck dropped 1% as the dollar retreated. We have been watching resistance near the $22 level on UUP. The test lower today was a negative for the upside in the greenback.

Euro – The euro was testing lower on the rally in the dollar, but that reversed today with a 1.4% gain in the euro. The support at $129.35 is in play currently and break is the exit point for the play on the euro. Moved back to $131.50 on the day.

Treasury Bonds – The yield on the 10 year held at 1.89% and the 30 year to 3.08%. The downside risk in Treasury bonds is in play, but they are poised to bounce short term. TLT is testing support at $118.40 and could provide a buying opportunity. (SEE SECTOR WATCH LIST)

UNG – Natural Gas broke support and move lower to $18.70. The short on natural gas seems to be the better opportunity (KOLD). Today the inventory data showed a drop in supply. That was good news finally and the price moved up 2.2% on the day. Winter demand remains mild which is why the downside has been in play.

Palladium and Platinum remain the better bets on the precious metal side.

WATCH: FXI – China has firmly established the uptrend off the November low. However, the test of the move lower has bounced back to the previous highs. The Chinese exports rose 14.1% in December well above the 5% expected and sent the markets higher on the day by 1.3%.

WATCH: IYR – Look for reasonable entry. $64.90 Gapped open on Wednesday, but still of interest on test of the move. The break above $66.12 is an entry point of the move above the next level of resistance. Continued higher on the day.