Dow closes at a  new high and instead of fanfare… questions of how long it will last. The broad market indexes were higher across the board today leaving the bigger question on sustainability versus breaking out. Technically the Dow broke from the current consolidation and looks to climb higher. The S&P 500 index likewise broke above 1530 and is set to move higher. The NASDAQ composite index move above the February high as well. Lower volume and questions surround the move. Thus, one day at a time as we move forward. Updates are below.

Maybe now the focus will shift to the positive data from the economy versus the negative? If the trend continues the market will get the catalyst it has needed to continue the upside move.

The February 25th low pivot point remains in play this week. The chart below shows the leadership from XLY accelerating to lead the move. XLB playing catch-up after some selling the last two weeks. , XLF regaining some leadership poise. XLU still accelerating higher XLK played into the leadership move on Tuesday. Looking for the upside to regain momentum if the uptrend is to hold short term. 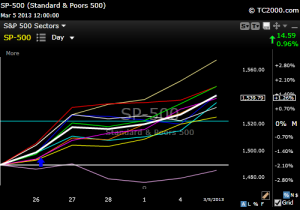 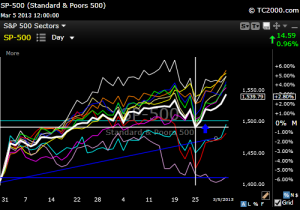 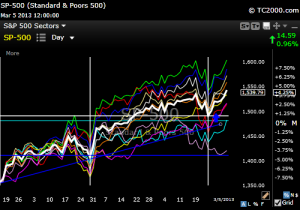 Financials – Struggled of late to hold support and maintain the current uptrend. May see more pullback short term, but watch for the leadership to return to the sector. Last three days has seen some confidence return to the sector and leading higher.

Energy – The sector remains under pressure from the decline in crude oil prices. The stronger dollar along with increases supply and storage has been the biggest detractor to the sector overall. XLE tested lower and we are looking for upside opportunity to return if the prices settle. Got small move on Tuesday and continue to track for the upside opportunity.

Euro – The euro (FXE) Broke support at $129.50 and ready to move lower? This is not improving short term as the outlook for Europe remains questionable. Still looking for some support.

Commodities remain weak with the dollar adding to the pain short term. Watch those components with a bounce as trade opportunity short term. 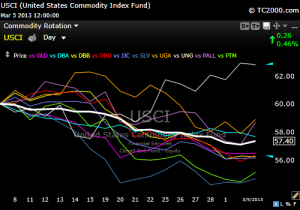 BAL – A trading range of $52.80-54.40 is in play. A break higher would be a continuation of the move off the November lows. Stalled and trading sideways. Watch and see it this can break higher. Tested lower again on Monday and back near the high on Wednesday? Thursday closed at the break out point watch for trade going forward. Confirmation to the break from consolidation last week. Keeps moving higher for now.

WATCH: Testing support at $60.50. Holds look for trade at $61 (volume has dried up use limit orders only/AON) Got the trade opportunity on Tuesday on the upside.

EFA – Watch $56.90 support to hold on the recent test. The long term uptrend remains in play and support has held to this point. Patience for the trade to develop. Nice move on Tuesday as the global markets follow the US lead higher.

IEV – Long term uptrend is still in play, but testing support near the $38.75 level. Watch as this unfold there will be an opportunity off support. gained 1.1% on Tuesday as the US markets help the upside.

Real Estate Index (REITS) – The pullback test is in play for IYR and $67.25 is support. Moving back towards the high at $68.50 resistance. Followed through on the upside on Tuesday. ADDED: Sector Rotation Model & S&P 500 Model.