The trading day was interesting as we had the Dow up triple digits, but other indexes struggling throughout the day. In reference to the Dow I mentioned in the video updates last night the strength the Dow was showing relative to the other indexes and it was showing some promise. That was accounted for today as the upside of the index set the tone on the upside.

Economic data was the black cloud early as the consumer confidence data was disappointing. 71.2 down from the 80.2 reading in September. The obvious choice to blame was the government shutdown. The temporary solution until January didn’t help matter either. Retail sales were weaker down 0.1% for September. Auto sales were the blame and again the government shutdown was the issue. Ex-auto sales the retail sales rose 0.4% which was better than expected. Do we get to blame the government for the better numbers? PPI was -0.1% showing no inflation at the wholesale level. That is good news, and finally the business inventory showed a gain of 3.1% and that was not a positive as it was expected increase only 0.4%. Negative data continues, but it is being discounted as you can see by the shutdown. We will see… this week ends the month of October and new data reports are not far off. It they don’t pick up the excuses for September don’t and won’t hold water.

After-hours LinkedIn posted better numbers for the quarter, but offered a weaker outlook. Video gaming stocks Take-Two and Electronic Arts both beat targets on new game releases and Playstation 4. Game Stop is one of our stocks we own and has been doing well in advance of this news. Watch the impact of earning in early trading tomorrow.

The healthcare insurance debate is heating up as individuals learn they will be paying more for their insurance and there is nothing they can do about it… except pay a fine if they don’t purchase the coverage. I don’t want to debate the issues of this law and our constitutional rights, I do want to look at IHF, iShares Healthcare Providers ETF. The pressure being put on the stocks is from the uncertainty going forward of how this new plan will play out or there will be sufficient enrollment to meet earning expectations. It is worth scanning the stocks within the ETF to define any opportunities as this all unfolds… up or down.

The S&P 500 index continues to hit new highs closing at 1771.  The near term target remains at 1800 on the index and support is 1730 and 1690. I like the upside going forward as the buyers remain in control relative to sentiment and momentum. Earnings and economic data remain the key short term for the index relative to direction. The downside risk is a possibility near term and if investors turn and run it could get ugly quickly. Looking at the stocks in the index the top 50 stocks today gained 2% or more. Worth scanning to see who the leaders are currently.

The NASDAQ hit a new high again at 3952 after struggling to start  last week and closed down today at 3940. Apple will not help if the move lower on earnings after-hours today holds into tomorrows trading day. The NASDAQ 100 weighting to Apple is greater and it will present even more problems for the index. Adjust your stops any QQQ positions accordingly.

The Dow has been playing catch-up to the balance of the markets and closed at 15,680 and back to the previous highs… finally. The move also completes a double bottom pattern setup for the chart as well. A break higher would be an entry signal to add to positions as a trade. Worth watching for a positive upside play if it breaks higher. IBM was the big contributor today gaining 2.7%. The intraday gain came on some heavy options trading as well in IBM. AT&T completed a breakout move as well above the 200 DMA and acceleration from a double bottom. Pfizer accelerated higher again to add to the upside of the index.

The Small Cap stocks continue to trade in an uptrend near the current high. The last seven trading days have been testing the new high and looking for a catalyst to move the index higher. Watching for some leadership if we are going to continue higher short term.

The chart today is the volatility index (VIX). As you can see below the lack of volatility is due to the buyers continuing to dominate the market trend. Only two of the last 15 trading days have ended with a negative return on the day. That is dominance by the buyers. As with most trend it will end and we will balance things out, but for now the buyer are in control. Watch the index for indications of a shift in sentiment from investors relative to the current trend. 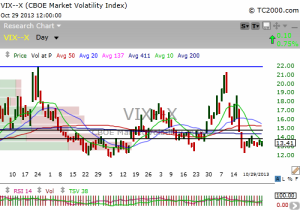 Consumer Staples (XLP) added another 0.8% today to the 1.3% yesterday. This is a continuation of the uptrend move and a breakout to a new higher. Since hitting the high in May the sector has been in a well defined trading range and the move above $42 is a solid breakout for the sector.

Netflix (NFLX) – On Thursday we posted the reversal on earnings for the stock and the potential for a test of the 50 DMA. Yesterday the close at $314, down 4.2%, put the test in play. The announcement that Netflix wants to get into movie production prompted a rally in the stock of… 4.2% closing back at $327.

Technology Sector (XLK) – continued the drive higher as the return of the high-beta stocks helped push the index higher today. This is another sector worth scanning the leaders for breakouts, new highs, and bottom reversals. I like the trading opportunities here going forward.

Telecom (IYZ) continues to lead on the breakout from October 11th trading range. After a six day flag consolidation on the move higher it moved higher again today.

What to Watch Tomorrow:
Reaction to LinkedIn and other earnings today. There will be Facebook after hours and of course more economic data to go with the earnings news. ADP employment report, CPI and the FOMC meeting conclusion to make everyone’s day. Remember, be discipline, set your stops and manage your risk in the current market environment.