The market set itself up to move higher and it managed to follow through finally. The Dow Jones Industrial Average managed to set a new high on Tuesday, but instead of fireworks erupting there are more headlines of skepticism than optimism. “New high: Rally point or new ceiling?”, “Dow High: Buy or Sell?, “Time to take profits?” You get the point. The last time the Dow hit a new high the markets were dealing with the pending financial crisis… real or not? The challenge for investors now becomes one of sticking with what got you here, or believing the music is about to stop and you don’t want to be the last one standing.

Today I wanted to use my morning notes to outline some points of interest, and gaining market perspective. The old adage of let your profits run, and cut your losses comes to mind as we consider how to treat the current trend. It is time to adjust your stops according to the risk you are willing to accept short term and let it them run. If the reversal takes place the stops will take you out and you move forward.

The leadership returned Tuesday following the two week break for volatility and uncertainty. In a news driven market it is easy to get sidetracked by speculation. Regardless the Financials, Healthcare, Consumer Staples, Consumer Discretionary and Utilities sectors emerged once again as the leaders. One sector that has been noticeably missing, technology. However, Tuesday the resurgence was positive with the sector gaining 1.4% to break above $30 on XLK, SPDR Technology ETF. That keeps the uptrend in play and takes out the nine week trading range. The key will be holding the move on the upside if the sector is to gain any renewed leadership. IGV, iShares Software ETF was the key leadership the last two days to provide the boost to move highers. The ETF broke above the resistance at the $68 level to add to the uptrend. Watch Semiconductors (SOXX) and internet (FDN) to help if the renewed leadership is going to last for the sector. I would like to see the renewed growth the sector continue if the broad indexes are to continue higher.

The VIX index made a big jump higher two weeks ago from 12.3 to 19.3 which prompted investors to push markets lower. The catalyst was the FOMC minutes which eluded to ending quantitative easing much sooner than Wall Street expected. The the Italian elections, and the US Congress not being able to reach a deal on mandatory budget cuts. Thus, the news and fear of the unexpected sent market into a short period of uncertainty. Tuesday the VIX closed at 13.5! Why the sudden reversal from the fear and uncertainty? Some positive economic data, positive consumer data, positive housing data and some Merger & Acquisition activity. The pluses outweigh the minuses and hello buyers. Thus, the fear of missing out on the market moving higher outweighed the fear of what might happen as a result of news that may or may not impact the market over the long term. The simple view of believing in the good news now, beating the bad news later, in the mind of the buyers. The volatility is not likely done, but for now the reversal has lent itself to a the major indexes moving back to and beyond their respective February highs, reversal complete.

The Chart of the Day:

The Dow Jones Industrial Average gets the nod for eclipsing a new high. As the weekly chart below shows the new high maintains the current uptrend and extends the move off the March 2009 low. Digging into the index the leadership is plain to see from value stocks paying solid dividends like Pfizer (PFE), General Electric (GE), Verizon (VZ), Disney (DIS) and Johnson & Johnson (JNJ). The trend to the upside has been drive by value off the November lows. The Dow Jones US Healthcare index has been one of the leading components, and the break above 458 puts the index in position to lead the next leg higher. iShares DJ US Healthcare ETF (IYH) is a way to track the sector with an ETF going forward. iShares DJ US Pharmaceutical ETF allows you to dig down to the drug manufacturers to play the leader within the broader healthcare sector. iShares DJ US Heatlhcare Provider ETF (IHF) allows you to invest in the care providers within an ETF. Healthcare’s leadership of the Dow has been key to push the index to a new high. 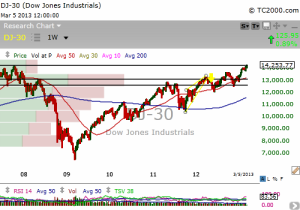 The ISM Services data on Tuesday was better than expected and confirmed what was report last Friday on the ISM Manufacturing data… The economy is expanding, albeit slowly, but expanding nonetheless. That puts the economy at the forefront of being a driver in the short term outlook. The jobs report being better than expected on Friday would only add to the buzz relative to the economy short term. Optimism springs eternal.

Overall the markets are in a positive sentiment zone for now. Watch, manage our risk and remain disciplined towards you strategy. Remember your time frame relative to holdings, and don’t let the noise of the talking heads distract you from your goal.