Rumors have been loud and plentiful relative to the current hot topic of the fiscal cliff. Thankfully over the weekend the plans were set to have meetings with the House and Senate leaders at the White House. While nothing may come of the meeting in the end, it did quite the nerves of Wall Street and some investors. The pundits believe in the end they will kick the proverbial can down the road and delay another year on overhauling the budget and attempt to fix the deficit. Therein lies the challenge, delaying the inevitable is what has gotten us to this point fiscally now. It will take time to work through the budget, determine how best to deal with the deficit spending, and find solutions that will work long term. Investors lack faith this will be resolved by year end, thus I can hear that can being kicked and clanking down the road yet again.

Taking all of this into consideration it is easy to be negative about the markets overall. The challenge in the current pullback or test of the long term uptrend is we are setting up to bounce versus fall further. The downside catalyst would have to be an impasse with the current government and the “fiscal cliff” becomes reality. That would take the markets lower without any consideration to what is currently taking place on the charts and fundamentally. Thus, assuming the powers that be in Washington find a way to kick the can, and keep things going for another year… the market is in a position to bounce off the current support levels.

The VIX index moved lower on Monday after testing the resistance levels on Friday. The chart below shows the lack of rising volatility short term. Investors are more willing to wait and see, than to panic further. Thus, the fear factor in the markets is not rising, but stalling in anticipation of something positive. Buyer? We will see soon enough with the time constraints on the decision from Washington. 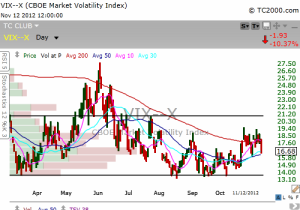 The Dow, S&P 500 and NASDAQ indexes have pushed to support levels where buyers could be willing to step in and own stocks at what they consider discount prices. 71 percent of the stocks in the S&P 500 index are trading below their 50 day moving average. The willingness to buy of course is predicated on the current fiscal crisis issues being kicked down the road with an extensions or some compromise on a proposed structural change in taxes and spending. Either way investors want some clarity going forward, even if that is only for another year. Thus, the risk of being short the market is higher near term than the risk of buying stocks, assuming a resolution to the fiscal cliff. It is also important to remember that being oversold isn’t a reason to buy stocks. It is all the supporting events taking place added together that will offer any upside opportunity going forward.

The current P/E level of the S&P 500 index is 13.9 times current earnings. That is not excessively cheap, but it is not expensive either. With the Q3 earnings still being announced they have shown a slowdown as noted many times in the last few weeks. Unless they are going to fall off the cliff with the budget, the market is still relatively inexpensive based on forward earnings. Thus, the case for a near term bottom being at hand is completely logical. That said, logic always prevails… eventually. It the emotional roller-coaster that drives investors crazy in the meantime.

Digging into the S&P 500 indexes ten sectors, the most attractive relative to the P/E valuation is financials, they are currently 11.9 times earnings. It also ranks second for the highest percentage of stocks beating earnings estimates at 72 percent. Healthcare has been the strongest sector, but on a relative valuation bases the financials look more attractive. If the broad markets do bottom and buyers do put money to work, the sector is likely to offer the best upside potential moving forward. Thus watching XLF, KBE, KRE, KIE and IAI would be prudent going forward.

The market is setting up to bounce, but much of the outcome will be predicated on what happens at the meeting on Friday with all the leaders at the White House. The meeting has now become an event set up to provide a catalyst for the markets, good or bad. This may be one time where kicking the can down the road helps investors.